Analyzing The Kiss Between Farmiga and Highmore

Norma, Norman and Their Twisted Relationship

Bates Motel, the Psycho prequel, is all about the makings of Norman Bates and the show breaks down the whole character, showing us what goes into the makings of the eternally renowned Psycho. The creepiness and craziness on the show is thus, inevitable for the purpose of the show. And every once in a while when Norma Bates acts plain lunatic, fans seem to enjoy it. But in the second season finale, the show took it up by a notch, with the kiss between Norma Bates (Vera Fermiga) and Norman Bates (Freddie Highmore). There have been various perceptions regarding the scene and several judgments. Here is all about the kiss from the show’s EP Kerry Ehrin, courtesy of her interview to Entertainment Weekly. 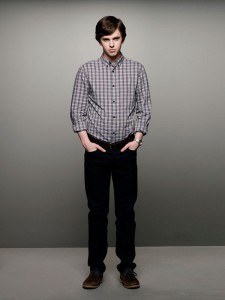 The very act that build up to the kiss, was Norman’s suicide mission, which allowed his mother to jump at the opportunity and shower her son with love; this time, not in a traditional way. Ehrin describes the suicide scene by saying, “Honestly I feel like the character told us that’s what he would do. It just seemed that this is a guy who really has always tried to do the right thing, has tried to take care of his mother and who knows that he’s like the sun in his mother’s sky. And to suddenly have to say, “OK I now have to tell my mom that I am not only on a pedestal, I’m a murderer,” it was such a horrible thing for him to do to her. That part of it was huge to him, that he just wanted to take himself out of the picture for her sake. And also I think he just couldn’t live with it. He didn’t know any other way to live with it and when you think about it, it really is the honorable thing to do if you found out that you were somehow horribly and unfairly violent to innocent people. So it came from that. It really did come out of the character and knowing the character and knowing how he would react.”

The Executive Producer then revealed that the kiss between Norma and Norman came from the top of Freddie Highmore’s head! The producers were in fact unsure about the whole idea and even decided to have a contingency plan but after the actual scene, they were very pleased by the way it went and Ehrin mentions that, “The way that Vera kissed him was so brilliant and so perfect and so understandable in that moment that they got away with it.” 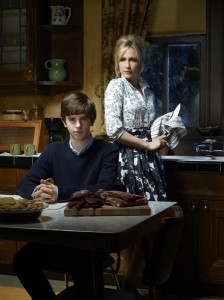 Norma’s relationship with her son is, without a doubt, an extraordinary one. But according to the EP and Farmiga, a mother always sees her son as a little kid, no matter how old he gets. “It’s part of being a mother, and I think that there’s that aspect of it, that it’s just her being a mother, and then I think there’s also this whole underbelly of their relationship which is, she’s so terrified of abandonment that she unconsciously plays into this sort of intimacy with him in order to keep him pulled into her. And he’s sort of helpless in it because he doesn’t understand himself or his own motivations well enough. So it’s this dance that they’re doing. It’s not said out loud. It’s very deeply psychological, but they’re both enabling the other one to do it. And it’s an amazing relationship to be able to write,” says Kerry Ehrin.

We all know that the final destination of Norman Bates is but the journey is the interesting part, according to Ehrin. A step towards the inevitable end was the final scene of Bates Motel Season 02, the one during the polygraph test. The grasp of Norman’s delusion on his conscious mind was evident and the degree of his disassociate identity disorder was revealed in that scene. Ehrin describes the scene by saying, “The intention of it was to show that there’s a part of him that is emerging that is not that totally sweet kid and a dark part of himself that he himself does not understand or have control over. Freddie was just awesome in that. I think they probably did like 15 takes and they were all great. All different too, so it was hard to pick. But yeah, I loved that one.”