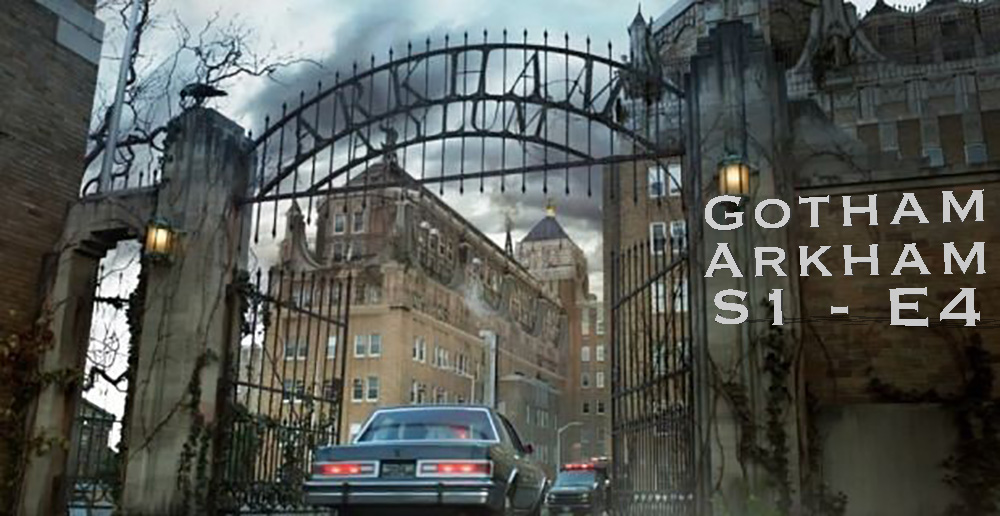 In the fourth episode of the first season of Gotham, we get more backstory for the future Batman universe. Apparently, there are two rival proposals for what to do with the old Arkham section of Gotham (including what to do with the abandoned asylum). One plan is backed by mob boss Falcone, and the other by mob boss Maroni. In what appears to be a hit designed to give one plan for Arkham an edge over the other, a hit man who uses a specific calling card to kill (a large, spring loaded, metal spike), kills of one of Gotham’s city commissioners and his aid. 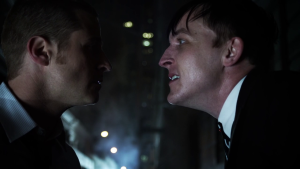 As we remember from last weeks episode, Cobblepot is back in Gotham, and he showed up to talk with Gordon. He gives Gordon the “Gotham is my home”, and “I can help you” speech. Gordon falls for it. Let’s face it, The Penguin isn’t trying to help Gordon. He is trying to use the Gotham PD to help him on his quest to take over Gotham’s organized crime. He doesn’t have the means to buy a cop (most of them are on Falcone or Maroni’s payroll anyway), So instead, he decides to manipulate that cop that can’t be bought.

So the Penguin tells Gordon that a mob war is coming and it is all about Arkham. This little tip allows him to figure out the motive behind the commissioner hit. However, the next commissioner to get hit (from the same assassin), is on the other side of the vote.

This seems to be a pretty big error in story telling here. Why would the two opposing mob bosses be using the same hit man? Don’t they have their own hit men? I could buy it if the hit man was something special. But the only thing special about this guy is he uses a spring loaded ice pick.

Meanwhile, Cobblepot (who has been working as a dishwasher at a restaurant Maroni owns) stages a robbery at the restaurant and makes it look like Falcone orchestrated it. Cobblepot “saves” one bag of Maroni’s money making him look like the hero of the day, and Maroni send the same hitman to kill the Mayor of Gotham to make sure he gets the Arkham decision he wants. 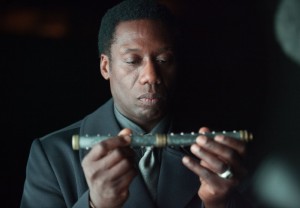 Gordon figures out the Mayor is the next target and gets to the Mayors house just in time to save him from the ice pick assassin Bullock and Gordon shoot the assassin dead, and all is well. Almost.

The mayor decides to do a compromise on the Arkham deal giving each mob faction what they want, and refurbishing and reinstating the old Arkham Asylum (as opposed to building a new, state of the art, mental health facility.).

As a stand alone episode, this one was kinda weak. The assassin was under developed, and a bit bland. The motivation of the mob bosses to get the Arkham plan they wanted was also under developed. This episode seemed to exist for the purpose of setting up Arkham Asylum for future episodes, and for pushing the Penguin story.

There was the standard season arch storylines. Bruce Wayne was interested in what was going on because one of the plans (the one that included building a new mental health facility) was put forth by his parents so he thought that these killings might have to do with his parents’ death.

There was some meaningless Fish Mooney storyline about her hiring some singer / weapon that will eventually tie into her attempt to overthrow Falcone.

Edward Nygma made a brief appearance as well. Notably absent was Selina Kyle