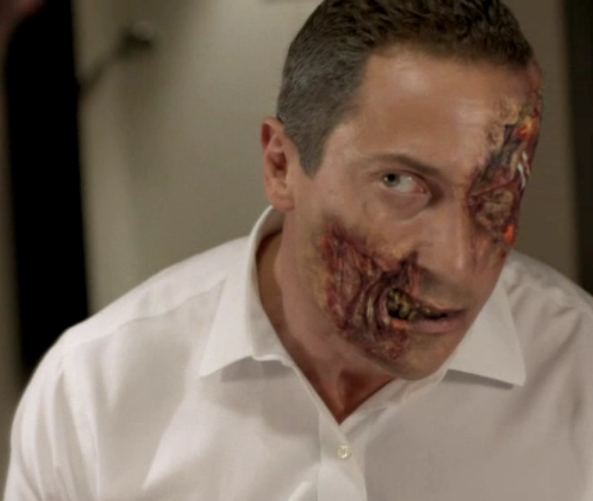 Grimm is back with a new episode called The Eyes of the Beholder. This episode was a standalone episode or some sorts, or a filler episode, not really that important because it doesn’t further the major plots. There’s a lot going on in Grimm but the writers decided to just have an ordinary day where the good guys chase down some baddies.

For episode 10, we could say that they’ve tackled on gangs and homosexuality. The gang part of my statement is very understandable, but the homosexuality part needs some further explanation. Read further to know exactly what I mean.

Anyway, let’s start with Hank’s love interest/physical therapist Zuri who appeared in the Red Menace episode. Hank likes Zuri, but she just wants a professional relationship. But the real reason behind Zuri’s strict no dating patients rule is the fact that she’s a Wesen.

Another seemingly normal person that’s obviously not normal is the battered wife Alicia who has been staying at Nick’s and Juliette’s house. The Wesen house guest is having a hard time admitting she’s a freaking monster, even though Juliet confronted her about the issue. Being a Wesen was somehow related to being gay as Juliette told Nick that: “Alicia’s just not comfortable coming out yet.” This can be a very interesting path to take from a writer’s perspective. This can give the fantasy show more layers to play with in terms of story.

Although no major plot points of the show came into play, Alicia’s whole story of being a battered wife came to a close. Her husband who was stalking her for days, decided to just force himself to Nick’s house and wanted to grab his wife. Alicia’s husband knocks Nick unconscious, because you know, he works out a lot. This incident forces Alicia and Juliette to be the saviors of the day. In particular, this highlights Juliette transition from housewife to potential Wesen ass kicker.

Meanwhile, in Europe, nothing really happened. Renard was shown for a little while, Adalind was nowhere to be seen, Kelly Burkhardt couldn’t be seen either.

We saw Montoe and Rosalee being involved to move the gang storyline forward but it was just that, nothing special.

Maybe the reason for the lack of plot movement was to give more time to the budding love of Hank and Zuri. I’m a fan of Sharon Leal so sure why not. They had their moments when Hank and Zuri had their eye to eye moments which was a bit cliché to be honest.

On a different note, Zuri ripped a guy’s throat out. It was a bad guy so it was okay. Hank had no problem with it because he’s a very understanding guy. Or, he wants girls that can rip the throat of a full grown man. You go analyze this one.

Well, the episode was not bad. It was cool on some points especially the parts where they highly empowered women. I just hope that the next episodes will be much more action packed. How about you? What can you say about the episode?