American Horror Story Casts A Stunner To The Freak Show 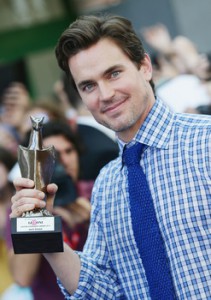 American Horror Story is all set for its fourth season called Freak Show set to premiere in October 8, 2014. The series has a new trick up its sleeve with the addition of White Collar’s notorious Neal Caffrey, we mean, Matt Boomer. The stunning actor received Emmy nomination for his performance as Felix Turner on HBO’s The Normal Heart, also directed by American Horror Story’s creator Ryan Murphy. Now, Matt Boomer is about to grace us with his presence on FX’s hit series as a guest star.

Upon speaking to Entertainment Weekly, Ryan Murphy stated, “I try to get him to do everything for me. I sent him a text that said, ‘First right of refusal, here’s the role.’ It’s very…warped.” The news of Matt Boomer attending the Freak Show is yet to be confirmed officially by FX of its parent company FOX. According to Murphy, Boomer had to work his way around his current project, Magic Mike 2, in order to make time for AHS.

American Horror Story, the proud owner of six Emmys since its inception in 2011, is bringing forth its fourth season this year. The fourth season, titled, Freak Show, is anticipated to be the best season out of all of the ones made so far. And with stars like, Patti LaBelle, Wes Bentley, actor from The Hunger Games, Michael Chiklis, Fargo’s John Carroll Lynch The Normal Heart’s Finn Wittrock and the world’s smallest living woman, Jyoti Amge. Recurring roles of Kathy Bates, Jessica Lange, Frances Conroy, Angela Bassett, Emma Roberts, Sarah Paulson, Evan Peters and Gabourey Sidibe will also be an enjoyable part of the show.

The latest season, Freak Show, has been officially described in these words: “Freak Show begins its tale in the quiet, sleepy hamlet of Jupiter, Florida. The year is 1952. A troupe of curiosities has just arrived to town, coinciding with the strange emergence of a dark entity that savagely threatens the lives of townsfolk and freaks alike. This is the story of the performers and their desperate journey of survival amidst the dying world of the American carny experience.”