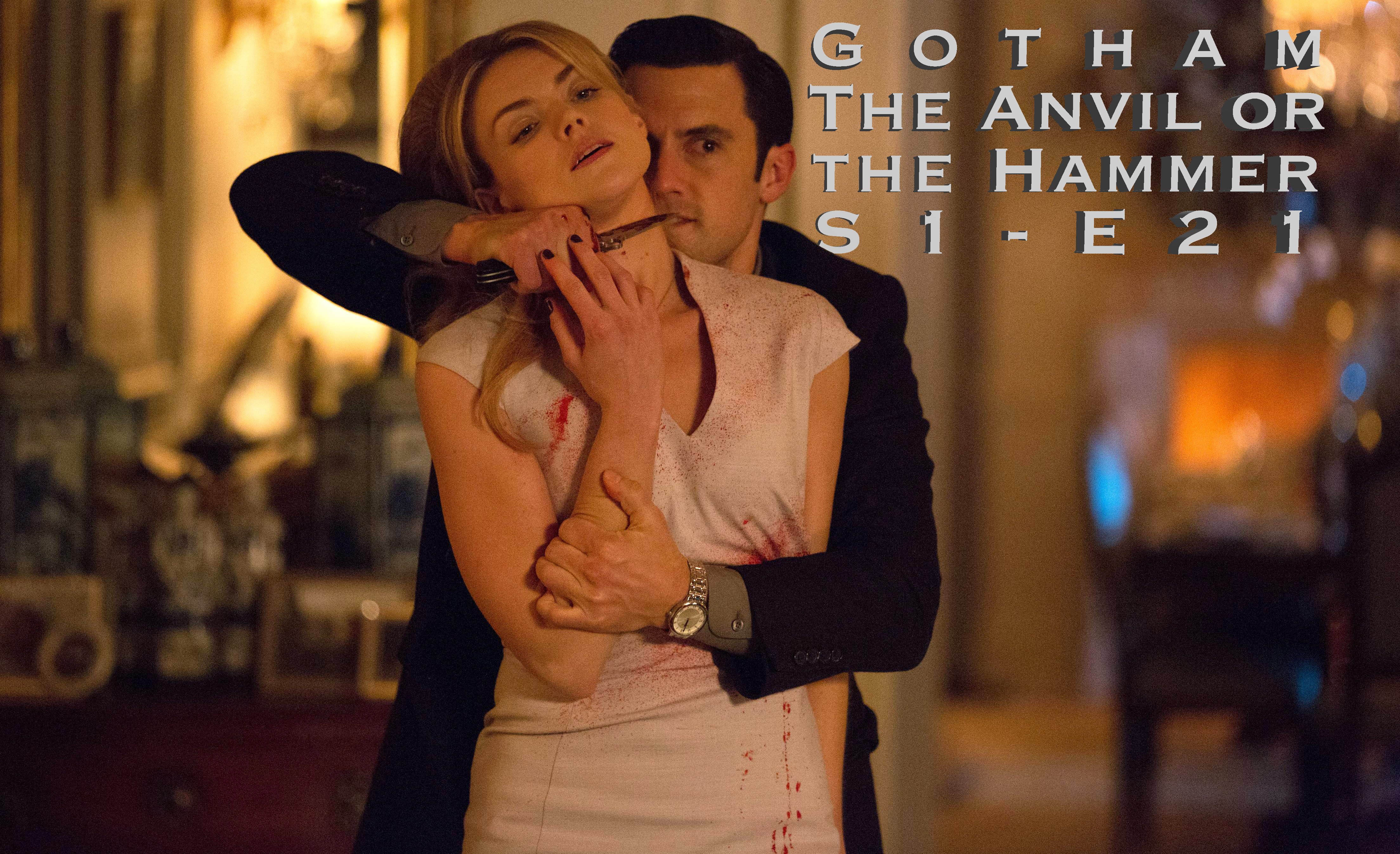 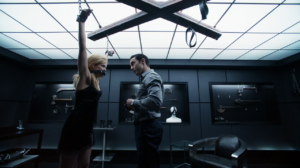 After last weeks Wayne Ball, Barbara wakes up from a one night stand with the Ogre. As she tries to slink off in the morning, he traps her.He tell her that he was going to kill her until he realized that she is “the one”… dude, you don’t go into that after the first night, no wonder you have so many lady problems. Anyhow, he ties her up, and despite Barbara acting like the last woman he killed, he is still convinced she is “different’, and that delusion is keeping her alive.

A street pimp is brought in to GCPD who may have information about the Ogre. Gordon and Bullock question him, and when the pimp doesn’t seem to happy to give up any information, Gordon is quick to inform Bullock that he is about to violate interrogation procedure. This is the same Gordon who earlier in the season was offended by Bullock violating the same procedure. Bullock steps outside to have a donut, and Gordon quickly emerges with a tip. The Ogre likes to frequent an underground sex club named the Foxglove.

Bullock knows of the Foxglove, and tells Gordon that it is notoriously hard to bust because it is invitation only, and it’s location constantly moves. Gordon says he can get an invitation from the Penguin. Bullock warns against leaning on the Penguin to much, but Gordon is obsessed. 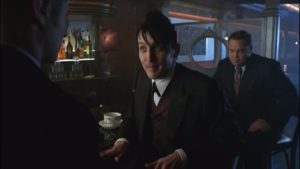 Gordon ends up threatening the Penguin when he is being nonchalant about the matter, but ends up owing the Penguin a big favor for getting the invite.

This is really starting to bother me. Gotham was supposed to be about the rise of Jim Gordon. The incorruptible detective that becomes police commissioner. We know that Gordon doesn’t clean up Gotham, because then we wouldn’t need a Batman. And we know that Jim Gordon doesn’t mind stretching the law a bit to fight crime, because he helps a vigilante in a bat suit… But still, this season has seemed to be more about how a good cop becomes a corrupt cop indebted to the mob. How the road to hell truly is paved with good intentions. The writers seem to be digging Jim Gordon into hole that it will be very hard to get him back out of. And if Jim Gordon isn’t the likable good guy that everyone is rooting for, then this show is lost.

The Ogre is working his mind tricks on Barbara. He shows her the pictures of the women he has killed before her, and tells her that they weren’t special like her. He tells her he doesn’t want to kill her, and makes her decide who he is going to kill instead of her. 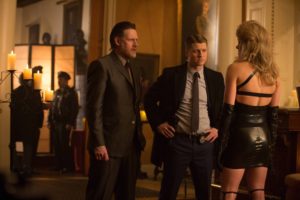 Bullock and Gordon bust the Foxglove, and one of the working girls there tells them about her run in with the Ogre. She gives them enough clues for them to figure out where he lives. When they show up to his apartment, Barbara and he are already gone. While searching the place, the phone rings. Gordon answers to the taunts of the Ogre. From the background noise, Gordon and Bullock figure out that the Ogre was driving over a bridge near a train, and that means they are headed to Barbaras parents house.

By the time Bullock and Gordon arrive, Barbara’s parents are dead. The Ogre try’s to take Barbara hostage, but he is surrounded by Gordon and Bullock. Gordon sees his shot, and drops the Ogre. Barbara is injured, but she will live. The Ogre is dead.

What Else Happened in The anvil or the Hammer?

I always though the saying was “between the hammer and the anvil”… I am not sure why it is backward here. 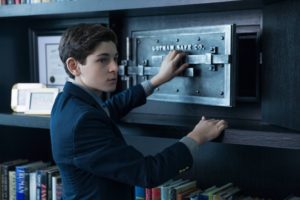 Bruce heads off to find out what is in Bunderslaw’s safe, and is caught in the act by Bunderslaw. Bunderslaw doesn’t seem to upset, and tells Bruce that his father, and grandfather were the same way, but they eventually came to see things properly and joined the company line. (how old is Bunderslaw anyway?). On his way out, another employee tell Bruce that his father wasn’t just towing the company line, but was a “good guy” in secret. Looks like Bruce has some more detective work ahead of him.

The Penguins plans for Maroni turned out to be far more devious then we had thought. All that time the he put into rigging up the bar to be the place to kill Maroni, was actually a ruse. He removed the firing pins from the guns of the assassins he hired, and made sure they told Maroni that they were there to kill him under Falcones orders. Then their guns didn’t fire. This leads Maroni to start an all out mob war in Gotham that Penguin hopes will end with both Maroni and Falcone dead. Devious and underhanded in true Penguin style, but a little foolish. Remember, Falcone was the only thing keeping Maroni from killing the Penguin. Now that Maroni is after Falcone, you can bet the Penguin is on his short list as well. 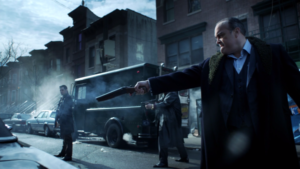 Overall, Penguins storyline was the only one this episode deserving of being in the 2nd to last episode of season 1. It really sets up the tension for the season finale. The Ogre story line was just some lame, one off serial killer, that died. Bruce is far from figuring anything out about his parents death, and Fish Mooney (luckily) is still no where to be found.

It looks like the Gotham Season 1 finale will be all about the Penguins mob war, and that isn’t a bad thing.