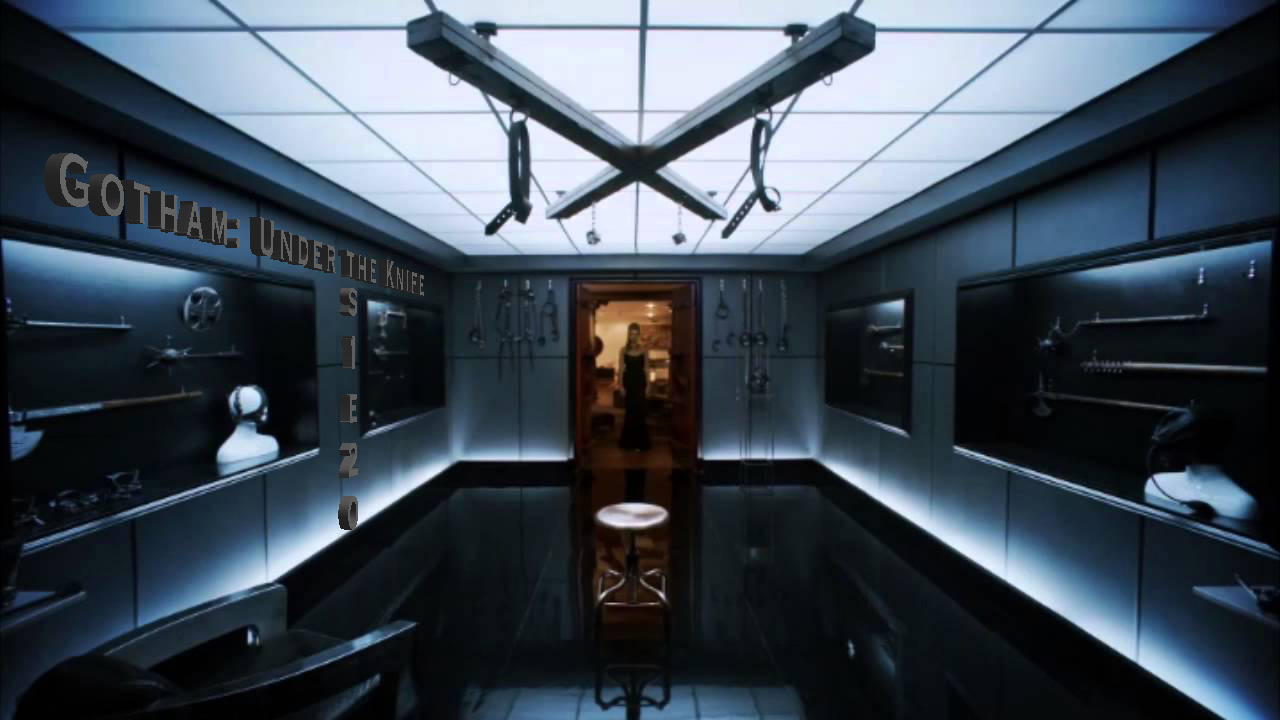 Under The Knife is the continuation of last weeks episode and is likely a story arc that will continue through the next two episodes to bring us to the end of the season.

Gordon has decided to go after the Ogre with everything he has. Gordon tries to convince Dr. Thompkins to leave town until the investigation is complete considering the Ogre’s habit of going after the loved ones of police officers who investigate him. 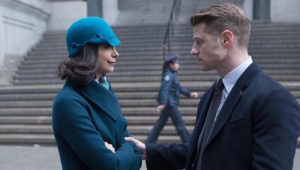 I still think this is a dumb premise. Besides the obvious problem that this habit of the Ogre’s would make it simple to set a trap for him (which nobody thinks to do…), there is also the problem that any cop who’s loved one was murdered by a serial killer would more likely become obsessed with catching the killer then they would just decide to drop the case. As we see over and over, revenge is a strong motivation.

Lucky for Gordon (and Dr. Thompkins), the Ogre is dumber then anyone thinks, and he goes after Barbara not realizing that her and Gordon are no longer a couple.

The Ogre figures out the Barbara and Gordon have broken up, but he senses that she is as messed up in the head as him, and is attracted to her anyway. This seems a bit off since we see him watching Gordon at his press conference to tell the media about the Ogre, and Gordon kisses Dr. Thompkins just before the press conference starts. Therefore, he should know who to really go after, but he doesn’t (yet). 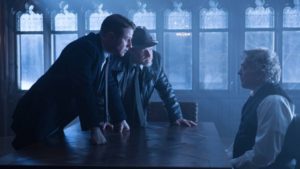 There actually is some good “police procedural” scenes here when Gordon and Bullock question the first cop to investigate the Ogre. They discover where the first victim worked, and from there are able to determine who recommended her. The wealth Gotham socialite that recommended the first victim for her job is their next stop, and there, Bullock discovers her rotting corpse in an upstairs bedroom, as Gordon finds the butler attempting to commit suicide.

Gordon saves the butler, and while questioning him, they realize the butlers son is the Ogre. Unfortunately, the only picture the butler has of his son is from before he had plastic surgery to fix his deformed (ogre-ish) face. However, the Doctor from earlier confirms that he did do the surgery, but he has no before and after pictures to give Gordon…

The Ogre calls Gordon at the police station to try to intimidate him and uses terminology the Gordon recognizes from a newspaper article that mentioned Barbara. Gordon rushes over to find Barbara, but she is already with the Ogre.

For more, we will have to tune in next week.

What else happened this week on Gotham: Under the Knife? 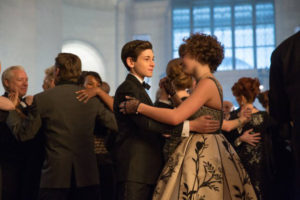 Bruce and Selina were still discussing Selina’s murder of Reggie. Just in case we didn’t get the fact the Bruce ends up a good guy, and Selina ends up a bad guy(girl). Bruce wants to break into the safe of Sid Bunderslaw (the Wayne Enterprises exec that Reggie fingered). Bruce and Selina decide to steal the key to the safe at the Wayne foundations charity ball.

This is a neat sequence that shows Bruce growing into the detective that he becomes. As an off thought, it might be fun to see the young Bruce Wayne take on the persona of Robin when he is still a child before eventually settling on Batman. This would be a neat way to explain the origin of the Robin that is later played by many different young men in the comics.

The Penguin is moving forward with his plan to take out Maroni, but he runs into a snag when Maroni shows up to Penguins bar and starts flirting with Penguins mom. 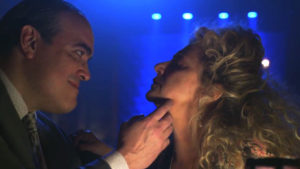 These leads to Penguin assuring his mom that he is nothing more then a night club owner, and not the ruthless criminal killer that Maroni told her he was. The Penguin kills a man outside his moms door, and drags the body off without closing the door… (I guess that was played more for humor then realism, it was very comic book-y).

Ed Nygma made one big step closer to becoming the Riddler on Under the Knife. In a kind of triple meaning for the show’s title (the first being the plastic surgery the Ogre went through to become less ogre like, the second being the knife the Ogre wants to use to kill someone close to Gordon) and the third being Nygma’s knife. But let’s back up. Nygma Kristen Kringle a nice watermelon sculpture after testing stab wounds out on watermelons. When he brings it to her, he sees bruises on her arm from her abusive cop boyfriend. He tries to confront the beater once, and it doesn’t help, so he waits outside Kristens apartment all stalker-y like (just remember kids, nothing ever good comes from waiting outside someones apartment if they don’t know you are there). When the drunk beater shows up for some late night Kringle lovin, Ed confronts him again. The beater punches Ed in the stomach (because that is what beaters do), and Ed retaliates by stabbing him. Although a sane person would have called the cops and claimed self defense… we know poor little Ed is not sane. And so begins the Riddler.

On a good note, we didn’t see Fish Mooney this episode.