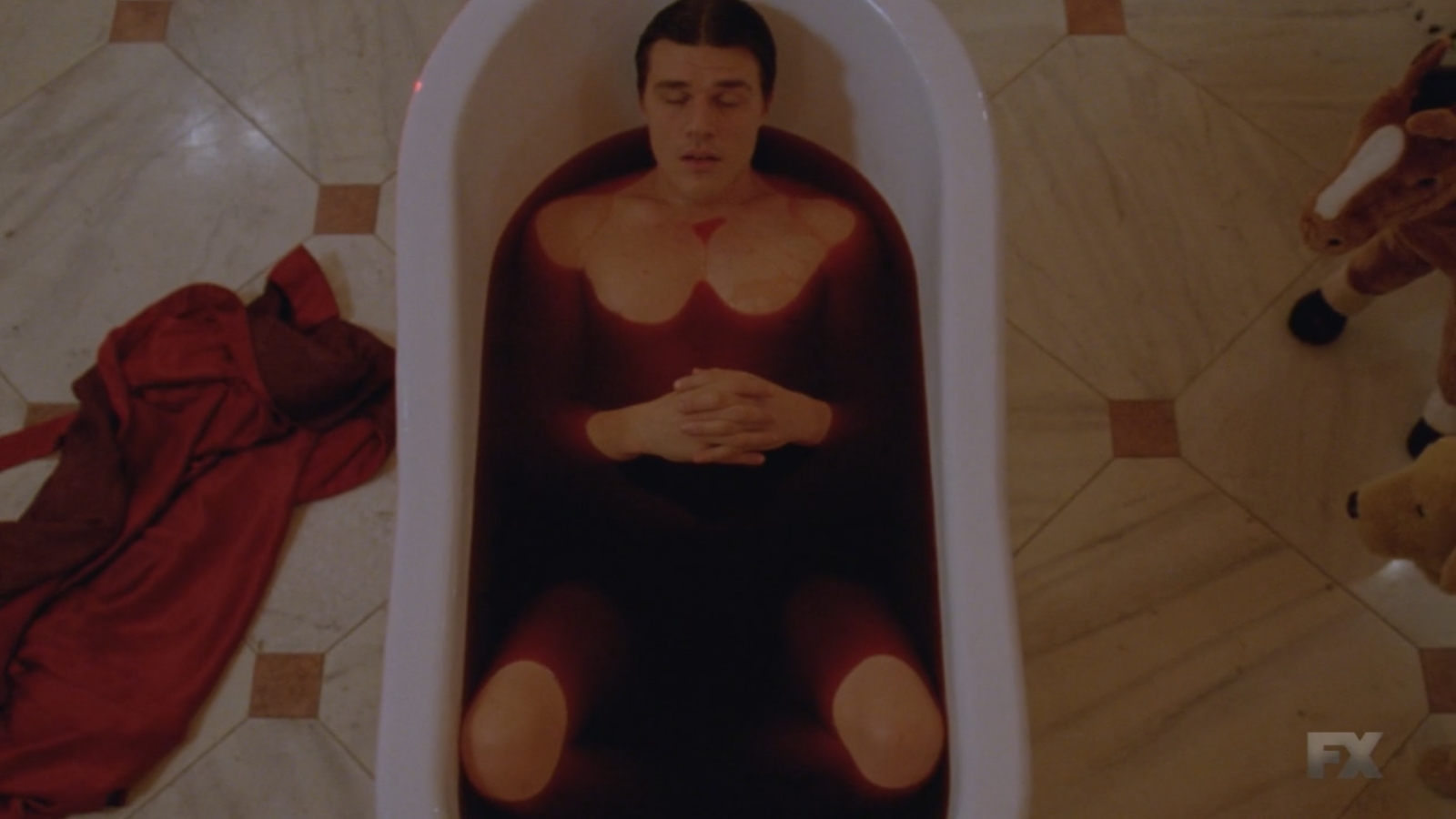 Christmas trees are put up and the lights are coming out, it’s also time for American Horror Story to get ready for the holidays and talk about family. Or rather, which family members it wants to kill off. On AHS, Halloween might seem like the most horrific holiday of the year, but it’s really all that red of Christmas that spells unexpected disaster for this show.

Blood Bath was a no-nonsense thumb sucking episode complete with freaky acts of madness and murder. It introduced a new freak into the fray while giving us three massive and  vicious squabbles that eradicated major characters from the show.

Whether or not you’re sold on Maggie’s “If you do this, he wins” intervention speech that stopped Penny, Desiree, and the rest from murdering Penny’s dad, I do feel that stopping the attack with the hot tar and feathers was, in a sense, solid payback.

Now, excusing the long scene between Ethel and Elsa,  Elsa’s takedown of Ethel was pretty cool. And a much needed payoff for the knife throwing skills the show made such a production out of back in Bulls eye. Most important here is the pieced-together family Elsa has created for herself. Ma Petite’s death has been discovered and explained away as the result of her being dragged away by an animal. It’s accepted by everyone but Ethel, who’s been waiting for that last straw to confront Elsa. It’s in Elsa and Ethel’s argument where Elsa proclaims herself to be the savior of her freaks, along with Elsa’s reveal that she also had her own savior that makes this the episode’s strongest scene having to remove her head.

Dandy’s story really escalated this week as his Gloria tried to trick him into seeing a therapist. And I liked how we never saw the doctor’s face, just his nervous hands at one point. I’m not expecting a big reveal should we ever actually catch a glimpse of him though. I just thought it was a fun stylistic choice. On a show that’s had more than a few voice-over narrators, he actually felt like a “narrator” type.

Gabourey Sidibe returned this week as Regina, Dora’s daughter. And while things got pretty tense around the mansion due to her suspecting that Gloria and Dandy were lying, the episode didn’t end with her death. No, things took a hard left when Dandy swayed Gloria to kill Regina, and then wound up killing Gloria himself at the end after he suspected her of colluding with the doctor. And the final visual of him soaking in a tub of her blood was pretty bleak.

As unsuccessful as she usually was, Gloria still represented Dandy’s anchor somewhat. The person we thought he might kill last if he was truly radicating things. There was a time he couldn’t even bring himself to hurt Dora. But now Gloria’s gone, leaving Dandy free to do unspeakable things without an accomplice. It’s exciting. But it also might spell out his doom since his psychotic behavior makes him prone to making mistakes. I mean, it wasn’t all that long ago he was asking his mother to help him clean up his murder messes.

I don’t know if fat lady Ima is going to have a definite storyline on the show other than Jimmy just wanting to nestle in her bosom, but she sure got a star intro. Much like the one Dot and Bette had, with Elsa traveling out of the camp to scout for talent. It’d be silly if she now just remained in the background of the show. But the numbers are dwindling, freak-wise, so it was a good time to bring in a new face.