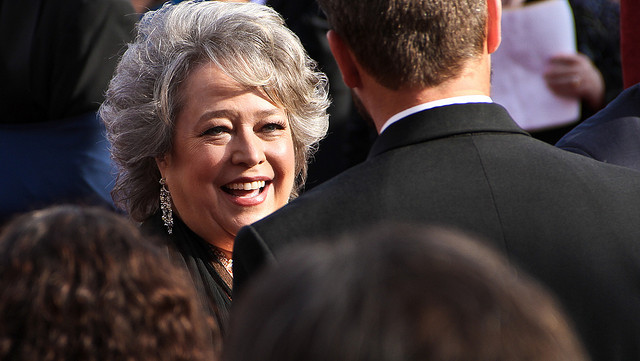 On talking about her unusual role in the movie, as she usually stars on drama movies, “I’d heard they (the creative team of McCarthy and husband Ben Falcone) wanted me for a part. I didn’t know what part. I told my agent, ‘I will play a giraffe with green spots, whatever they say.’”

“Even when she gets outrageous, when she gets on the most ridiculous jaunts and puts a bag on her head and all of that, you go with it, because it’s real. It’s grounded in reality. You almost believe, ‘Hey! I’d do that, too,’” Bates said when she was asked about the appeal of McCarthy.

Bates describes her role in the movie saying, “I think of Lenore as an old lion. It’s taken her many years to create her business, to have a life for herself and (partner) Susanne (Sandra Oh). They met in college and I think they came out when it was very difficult for lesbians to be accepted. What I love about the way we are portrayed in the film is that Susanne and Lenore are a normal, healthy couple, which says, ‘You can’t legislate who you love.’”

When asked about her ties to the character Lenore, Bates said, “I am an old lion, too. I’m nipping at the cubs quite a bit these days. When I get a young director who wants to do all these fancy shots and use all these wide lenses from a low angle, he’ll get nipped. (Laughs.) I have spent 50 years of my life learning about this craft. And I’m about to turn it over to the kids that are coming up, which I will do, willingly.”

Bates has no plans of retiring anytime soon with her full schedule and further says, “I can’t believe it. Let’s face it. When (her TV series) “Harry’s Law” got canceled and right after that I found out I had breast cancer and I had a double mastectomy that summer, I was pretty low. And I felt like I’d been kicked to the curb. And I didn’t know if I would ever work again. And then, a year later, along came Melissa and (“American Horror Story” producer) Ryan Murphy. I’m just grateful for all that. A few months ago, I made the choice not to have (breast) reconstruction, because it occurred to me, “I don’t want to go back to bed. I don’t want to be on (the painkiller) Oxycodone for two months. I’m having too much fun.”

“Sleepy Hollow’s” Kathy Bates???? Sleepy Hollow’s?? If I’m not mistaken, and I guess I’m not, she never starred in it. Get your facts straight man!