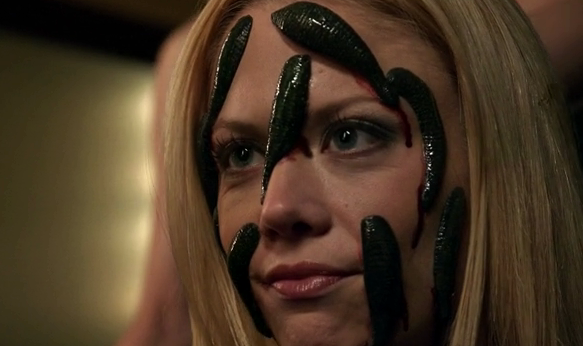 Wesens (pronounced as VAy-zin or VES-sin) is a collective term for the creatures that are seen by Grimms. These creatures came from an ancient race known as Purebloods which exhibited god-like and immortal traits. These Purebloods were once worshipped as gods and goddesses by ancient civilizations. At the present, these Purebloods do their best not to attract human attention; instead, they lurk in the shadows and affect the world in their own secretive ways.

Wesen’s look scary, but not all of them. Some look cute and funny, while others look tantalizing. In their human form, they can interact with normal people with no problem, but if they start to woge (the act of changing from Wesen form to human form) that’s when their problems start.

The Jinnamuru Xunte is a fly like Wesen that first appeared in the episode Mr. Sandman. Like flies, they have enormous black compound eyes, grey skin, plus razor sharp teeth and claws. They are extremely fast which give them the ability to go almost toe to toe with Grimms on close combat. They have high vertical leaps, super strength, and durability.

Translated as “boa constrictor” or “king’s snake”, this cobra king like Wesen is surely a terrifying creature. Upon transforming from human to Wesen form, a Königschlange will grow fangs, a serpent tongue, scales, and a hood like a cobra’s. This creature is extremely fast, strong, and very sensitive to changes in temperature and movement. When a Königschlange decides to use his abilities to fight, he can be very effective, even against a Grimm.

Lebensauger are Leech like Wesen that are not really dangerous. They only made the list because of their hideous appearance. These creatures are overly insecure about their looks. Most of them abuse substances like alcohol and drugs to deal with their appearances. Lebensauger’s are good at suppressing their Wesen forms. They are also good actors to conceal the other side of their identity.

These bat like creatures are not only creepy looking, they’re also dangerous as hell. Murciélago possess a shriek so powerful that it can shutter eardrums, pop eyeballs, rupture nasal passages, and explode bowels. They also have sharp teeth and claws that they use as secondary weapons. Blutbaden refer to the Murciélago as Geölterblitz or “bat out of hell” due to the fact that a Murciélago’s shriek is particularly harmful to the sensitive hearing of a Blutbaden.

The Hexenbiest is reserved for females while Zauberbiest is reserved for males. These creatures are witch/warlock type creatures that also resemble zombies. They are one of the creatures that mostly look human except for the part where their skin decays, their teeth are sharpened, and basically look like a human corpse. Aside from super strength, these creatures possess an array of abilities like telekinesis, pyro kinesis, and the power to create illusions. They are also very adept in the art of potion making which they use to bewitch people.