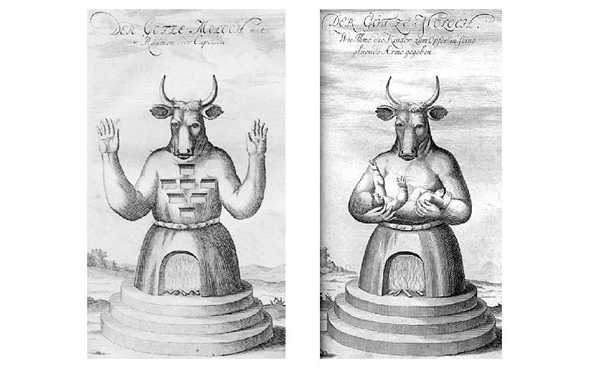 WARNING! This article talks about human sacrifice, read at your own discretion.

Sleepy Hollow was based from a story that we are all familiar with. The creators and the writers preserved the core of the story which was Ichabod Crane VS the Headless Horseman, however other major details were either made up or taken from other sources.

Moloch, the biggest villain in the show, was inspired by a real-life pagan god that people used to worship way back in the olden days (specifically the Canaanites, Phoenicians, and related cultures in North Africa and the Levant). His name has different variations depending on the translation of the text. He was called Molok, Moloc, Molech, Molekh, Molock, Melech, Milicom, or Molcom.

Leviticus 18:21: “And thou shalt not let any of thy seed pass through the fire to Moloch”

Since Christianity considered Moloch to be a pagan god, it was forbidden for Christians to sacrifice their children to Moloch. Yes, this actually happened. People did sacrifice their first born child to a pagan statue. Moloch is pictured as a humanoid man with a head of a cow or a bull. His statue was made of bronze, the top part consisted of his upper body and his head with his arms and hands positioned to carry infants. The bottom part looked like an old school oven with an opening in the front. The opening is where they put the wood that is used for fuel to heat up the brazen statue. When the idol is glowing, the worshippers will place the body of a baby and watch it burn with the statue.

The newer worshippers killed the child first before placing it to the hands of Moloch.

“As to the rites which the worshipers of Molech performed, it has sometimes been inferred, from the phrase “pass through the fire to Molech,” that children were made to pass between two lines of fire as a kind of consecration or februation; but it is clear from Isa. lvii. 5 and Jer. xix. 5 that the children were killed and burned.” – Jewishencyclopedia.com

On the other hand, older kings ordered that the children be burned alive with the statue.

“The ancients would heat this idol up with fire until it was glowing, then they would take their newborn babies, place them on the arms of the idol, and watch them burn to death.  I can’t help but compare today’s abortion massacre to the sacrifice of children by these ancient pagans.  In both, innocent life is destroyed for the gain of the parent.” – Carm.org

All of this really happened. Palestinian excavations have found infant skeletons in burial places around the shrines. Why did they do it? Well, worshippers considered Moloch as a protecting father or a king. People thought that they will be protected from natural disasters if they sacrifice their children. Child sacrifice was also an imitation of a rite that comes from an Ammonite cult as it has been said that Moloch was the ‘abomination of the children of Ammon’.