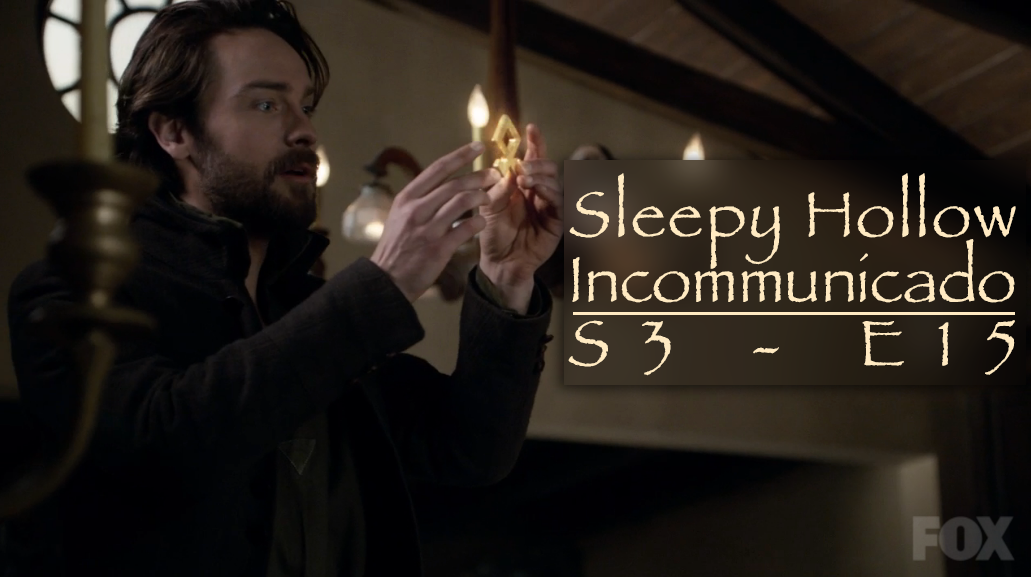 In Incommunicado, someone forgot this simple fact. Sure, everyone is working toward the same goal, but everyone is off doing it in their own way. (I do mean everyone in this episode. Even Pandora and the Hidden One have the same goal as Abbie, Crane, Jenny, Joe and Foster. 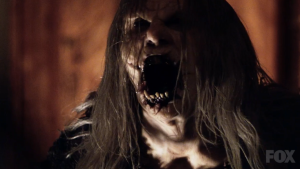 But before we get to that, let’s talk monsters. There are a couple in this episode, but let’s start with the one from the opening of the episode. Incommunicado begins with a trio of garage band musicians, that are far to old to be playing indie rock in a garage. While jamming out, the sound mysteriously disappears from the room. Out of a plume of smoke materializes a witchy woman with a messed up mouth. She lets out a horrible scream and the band is no more. It looks like Sleepy Hollow has a howling Banshee.

Agent Foster is investigating the band deaths, and she gives Abbie the heads up that something strange is afoot. Abbie heads off to investigate leaving Crane in the library to play with Abbie’s strange symbol. Abbie looks at the video footage the band was shooting before their untimely death, and sends Foster over to show it to Jenny and Joe, while Abbie plans to go back and talk it over with Crane. 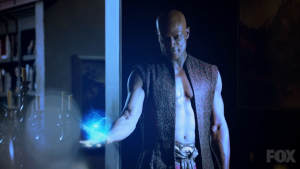 While Abbie was away, the Hidden One stops by the Library to give Crane a visit. He was apparently going to kill both Crane and Abbie, but was unaware that Abbie had left. Crane won’t tell the Hidden One where Abbie is, so the Hidden one decides to just kill Crane now, and deal with Abbie later. Unfortunately for the Hidden one, when he tries to Haduken Crane, Abbie’s symbol leaps from his pocket and blocks the energy bolt. This activates an energy field that traps both the Hidden One and Crane in the library.

There are several inconsistencies in the writing of the episode at this point. It is revealed that the symbol is the “Emblem of Thura” This symbol is what imprisoned the Hidden One 4,000 years ago. This means that the symbol was imprisoning him until earlier in the season. So how did the Jersey Devil get it? The Hidden One also claims to be omnipotent (knows all). Yet he didn’t know Abbie wasn’t there, He had to ask Crane where she was. He didn’t know Crane had the Emblem of Thura… the list of things this omnipotent god doesn’t know goes on and on… Wouldn’t it have just been easier to leave out the omnipotent part? Greek and Roman gods weren’t omnipotent, so it isn’t like being omnipotent is a prerequisite for godliness… 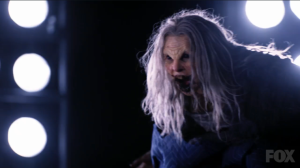 Anyway, Abbie runs into Pandora in the tunnels underneath the library, and they form an unlikely alliance to let Crane and the Hidden One out. Pandora needs monster energy, so Abbie tells Jenny Joe and Foster to capture the Banshee.

Jenny Joe and Foster find a kick buck rock conert rig set up somewhere with no one around, and draw in the Banshee. Once there, they throw a sound blanket over it’s head, and try to hog tie it with aircraft cable. This doesn’t work. The Banshee rips through the blanket and starts wailing at Jenny. Joe shoots the Banshee with iron arrows to save Jenny, but kills the Banshee.

When Jenny and Joe show up to break the bad news to Abbie and Pandora, it becomes evident that they need another monster, and Joe’s Wendigo will do the job.

Jenny Doesn’t want Joe to go through with it because it might kill him, but Joe thinks it might kill the Wendigo inside him so he agrees. It doesn’t go well at first because Pandora doesn’t have enough of her box. 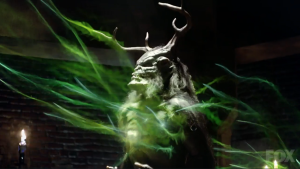 Meanwhile, inside the library, The Hidden One and Crane discuss books and art, and philosophy. The Hidden One informs Crane that his, and Abbie’s role as witnesses is passed down through blood lines, and after absorbing all the information in the texts of the library, the Hidden One help Crane with a better translation of his tablet. Crane uses the translation, and the Emblem of Thura, to make a vision of Abbie and Pandora that Crane and the Hidden One can see. They see Pandora admit that she told her people how to imprison the Hidden One using the Emblem, and that she knew the Witnesses had it. (his omnipotence didn’t let him know that either apparently…)

With the piece of her box that Jenny and Joe retrieved last week, Pandora is able to successfully draw enough Wendigo from Joe to break the barrier, and the Hidden One disappears from the Library. Joe seems to be ok, and Wendigo free, but the tablet, and the Emblem of Thura are gone. Back at their love den, Pandora has some explaining to do… 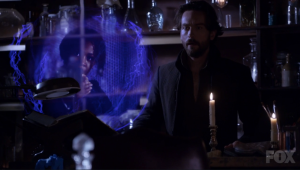 So a lot of the writing in this episode didn’t make sense, but it seems like it was really just put there to clear up some extra storyline that had managed to get into the show. They had to get rid of Joe’s Wendigo, they had to give Pandora her box back, and they had to get rid of the Emblem of Thura. What this episode did add to the season arc may prove interesting in future episodes. How will the Hidden One react to Pandora’s betrayel? What does the Witness blood line thing have to do with anything? Could Jenny be a witness? Does Abbie and Jenny’s dad know anything about witnesses? As season 3 begins to draw to a close, I suspect we will find the answers shortly.