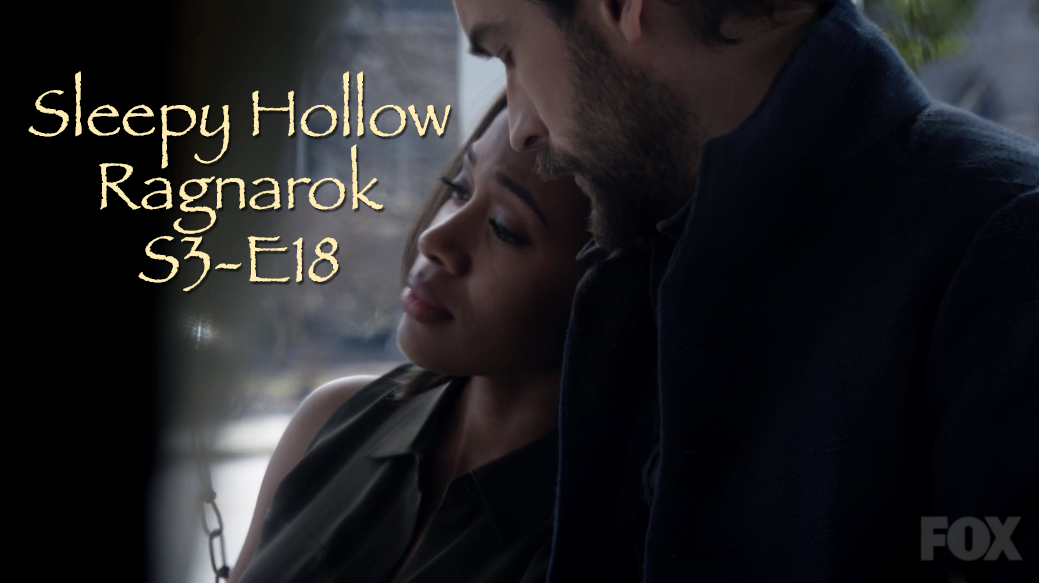 Ragnarok in Norse Mythology literally means “Fate of the Gods”. It is the apocalypse myth of that religion. Fitting then that the Sleepy Hollow episode called Ragnarok may very well be the end of the series. 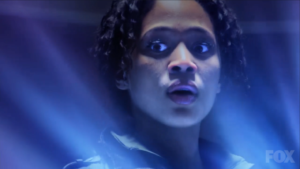 Sleepy Hollow has had an interesting run as a series. It is a show that is based on a brilliant idea. The show is beautifully shot, and the series leads have done some very good acting work. Some of the episodes have weaved American history, conspiracy theory and paranormal into a rich tapestry that enthralls audiences and keeps them coming back for more. Other episodes have half heartedly strung together urban legends and comic book beasts to make, at best, laughable attempts at television, at worst, just bad TV.

Ragnarok was a perfect showcase of all the things wrong with Sleepy Hollow. As the third season finale, Ragnarok had to bring closure to the “Pandora and the Hidden One” storyline. Of course Pandora, The Hidden One, and the catacombs have nothing to do with U.S. history, N. American mythology, or conspiracy theories, so they really were the weight holding down the entire season, but it just got worse from there. (We know it is bad when Ichabod Crane is no longer quoting George Washington, Ben Franklin, or any other founding father, and is instead quoting James T Kirk). 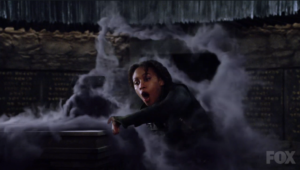 When we left our witnesses last week, they had found Betsy Ross in the Catacombs. Despite Abbies experience previously in the catacombs when she was there for what felt like a year to her, and what was a few weeks to the people on the outside, Crane figures that when Betsy exits the catacombs, after what has seemed like a couple months to her, she will return to the colonial era. I am not sure the path of logic Crane took to get to that destination… And will someone please explain to me how Betsy’s cutlass looked like an old, rusty antique when Abbie got to the catacombs … are the writers even paying attention to what they already wrote? Why does time speed up for Abbie in the Catacombs, and slow down for Betsy?

Betsy gets mad at Crane because he won’t tell her what’s really going on (it could disrupt the time line or something). She heads off back to the colonial time in time to send Crane the “dear John” letter from previous episodes. Meanwhile, Pandora’s box tries to steal Abbie’s “eternal soul”, but Crane slams the lid down on it. Then, they leave the Catacombs.

Back in the real world, The Hidden one has decided to postpone his plan to destroy the world, as any third rate villain would. Instead, he has trapped Pandora in a mirror, and decided to talk a lot until someone can come stop him.

Abbie and Jenny show up to blast the Hidden One with some Greek Fire flamethrowers, and while he is distracted, Crane sneaks in the back door. Crane leaves Pandora’s box on the ground in front of her mirror trap, and although mere moments before, she was begging the Hidden One to release her from the mirror, she can now just step out of it.

Pandora opens her box, and it starts sucking the Hidden One’s power from him. Unfortunately, the box didn’t finish rejuvenating in the Catacombs, and doesn’t have enough power to finish sucking the Hidden One’s power from him. Is it just me, or does that make no sense? The box didn’t suck enough power out of Abbie, so it doesn’t have the power to suck all the power out of an omnipotent god? Can’t the box just use the power it is sucking from the god to give it more power? I guess I just don’t understand the minutia of how supernatural boxes work. 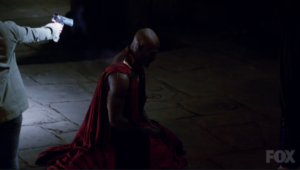 As you may be able to guess, the only way to finish off the (already vastly weakened) Hidden One, the box needs to finish sucking Abbie’s power. Abbie (once again) sacrifices herself for the world, and is sucked into the box along with the rest of the Hidden One’s power. However, the Hidden One isn’t sucked into the box. No, he is left as a zombie looking guy on his knees. (Consistency isn’t high on the writers list…)

Pandora walks over to the Hidden One to gloat in her victory, but Jenny shoots him in the head… because that is what you do to zombies. Jenny says “that was for Joe”. What about Abbie? Didn’t she just sacrifice herself to stop the Hidden One? Shouldn’t that have been for Abbie?

At this point, Agents Reynolds and Foster have disappeared. I am guessing they are hiding from this horrible writing. 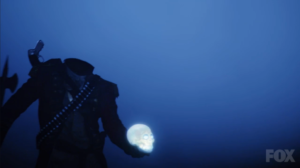 Crane and Jenny go to confront Pandora (who now has the power of the Hidden One in her box). Pandora seems to be taking her god powers lightly doing little more then scaring some church goers with a trick anyone with a fog machine could do. Other then that she seems to just like to hang out in cemeteries (like any goth girl who just lost her god husband). Crane and Jenny find her there, and Crane calls forth the headless horseman of death (hey, at least they brought the headless horseman back to Sleepy Hollow… maybe he can be Cranes partner next season).

Pandora’s box then goes all “glow-y I’m gonna explode”, and Crane manages to have enough time to grab it, and run back to the masonic room under his library before it explodes. 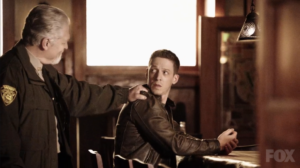 The explosion knocks Crane out and in his unconscious, he visits Abbie’s spirit (who previously has been eating pie in a diner with August and Joe Corbin)

Abbie and Crane have some nice closure as Abbie explains her time is done, but their must always be two witnesses. Jenny then wakes Crane up.

We next see Crane at Abbie’s grave, and her dad comes over to explain that the “eternal soul” of a witness will go on to inhabit a relative of the deceased witness, and then he gives Crane a letter from George Washington. Next, those scary FBI guys that had been so interested in Abbie’s progress, now show up to wisk Crane to D.C.

If Sleepy Hollow is cancelled after this episode, I would not be surprised. This episode really did take everything that was good about Sleepy Hollow and throw it out the window. Cancelation is justifiable.

There are ways to make the series continue forward in a good and logical way. Nicole Beharie (who is still under contract to the show) could return as the relative that Abbie’s “eternal soul” next inhabits for instance. But without the dynamic between Nicole Beharie, and Tom Mison, there is no Sleepy Hollow. 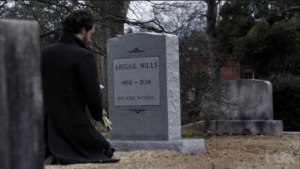 Could they make a spin off? “Ichabod Crane Goes to Washington”… meh I might give it a shot if they get better writers.

No, I think it is truly time for us to morn the loss of a show that never reached it’s true potential. A show that was brilliantly conceived, yet held down by a lack of direction, and poor story choices. A show that looked great, was performed great, and only failed in the boardroom. The writers and executives of Sleepy Hollow failed the show, and the fans, and like Ichabod Crane, we all mourn the loss of Sleepy Hollow at Abbie Mills’ grave.