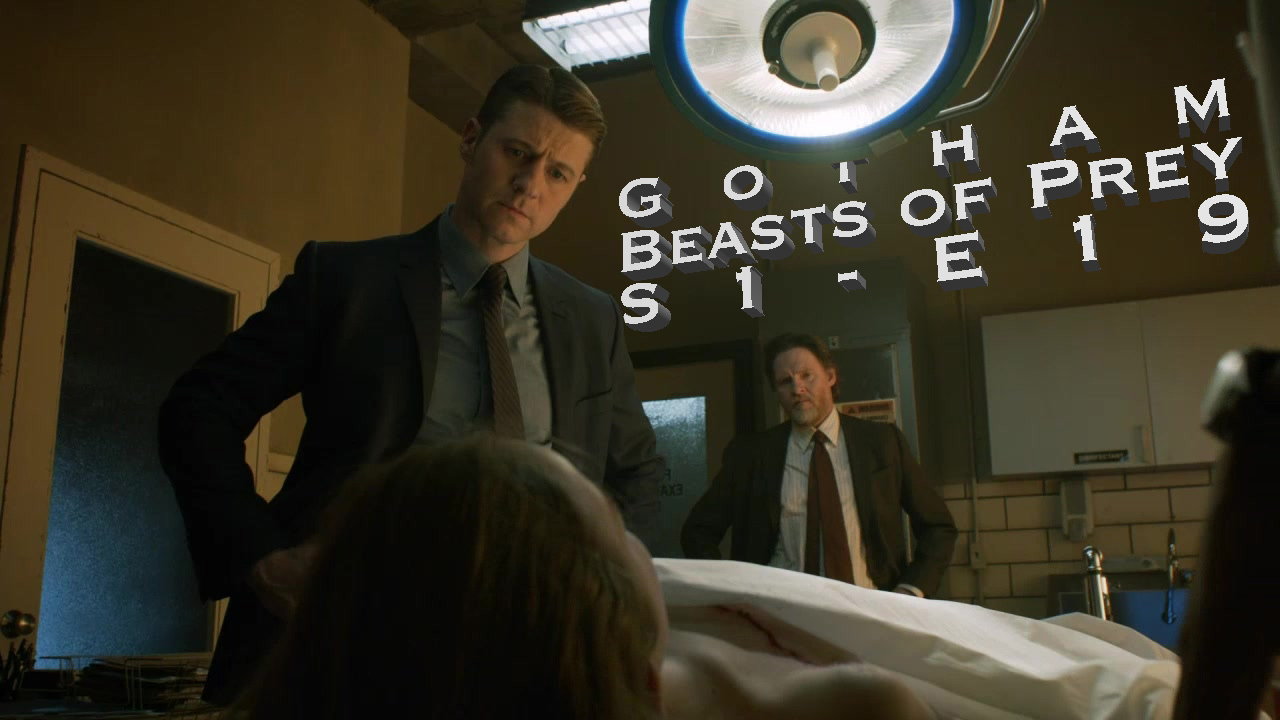 Beasts of Prey sees Gotham slide back into soap opera mode in the worst possible way. Nothing very exciting happens in this episode, and everything either leads into something that will happen in a later episode, or requires information from a previous episode to understand

The Crime of the Week 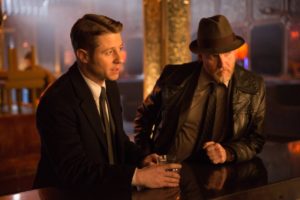 Some uniform officer ask Gordon to look into an unsolved homicide he discovered a few weeks prior. A girl was found stabbed to death. The officer says that the detectives that had the case looked into it a bit, but nothing came of it. Since Gordon has a reputation of getting things done, the uniformed officer decides to ask Gordon to look into it.

The victim had been missing for 4 months before showing up dead. When she went missing she had called her mom to tell her she was headed to a bar. Gordon figures out the bar, and the bartender remembers the girl because her date was cute. Gordon has Dr Thompson do an autopsy, and she finds no there bruising except the stab wounds. The contradicts the show later when it is revealed that the girls was handcuffed and tied up before she was stabbed. 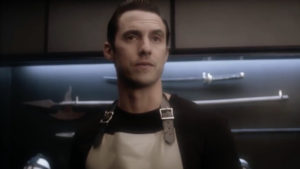 Ed Nygma discovers some missing evidence from the file, and Bullock recognizes it. The missing evidence is the killers calling card. He is apparently a serial killer that has killed a dozen or so women before this victim. However, he tends to wreak vengeance on any cop who investigates him by choosing someone close to them for his next victim. This seems like horrible writing. First of all, you would think this would make that first cop he did that to extra motivated to catch him… or at least the next one (he had to have done it more then once for it to be a pattern). Second, targeting people close to the cops that are investigating you makes for an easy way to set a trap to catch you. No, this story line makes no sense other then is serves the purpose of the writers. And that is just sloppy writing. So what is the purpose of the writers? Well apparently Commissioner Loeb sent the uniformed officer to trick Gordon into investigating the case so that the serial killer (named “The Ogre”) would target someone close to Gordon. This must have been Loeb’s way of getting back at Gordon. Gordon figures it all out, however, and confronts Commissioner Loeb and tells him he is going to catch the Ogre, and then he is going after Loeb. Will Gordon succeed? tune in next week to find out…

What Else Happens in this episode

The Penguin is having trouble convincing an old Italian lady to sell him her bar, so he has to take care of the lady’s daughter’s boyfriend for her to convince her to sell. Why is he going through all this trouble? because he is hatching a plan to kill Maroni. 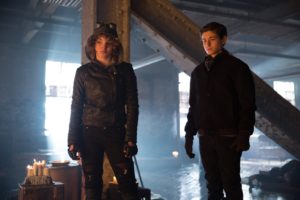 Alfred is determined to find his old pal stably… I mean Reggie. However, his wounds percent him, so Bruce decides to do it for him. He enlists Selina to aid him. Selina finds Reggie and Bruce questions him. Selina hangs his bag of dope out a window and then gets Reggie talking. He tells Bruce who hired him, and what he was looking for in Wayne Manor. Bruce tells Selina to give Reggie his drugs back, but she tosses his dope out on a ledge. Reggie threatens to tell the people who hired him that Bruce now knows who they are, and claims that they will kill him. As he is leaning out the window to get his drugs, Bruce considers pushing him, but hesitates. Selina notices this, and she steps in to push Reggie out the window to his death. This is really a great scene because it shows the difference between Bruce (who will one day become the Batman and fight on the side of good), and Selina (who will one day become the Catwoman, and fight on the side of evil). Although they are both on the same side now, Selina is already willing to cross a line that Bruce can not.

Fish Mooney makes her escape from the Dealmaker in this episode as well. She gets shot in the gut as she is escaping. will she survive? Unfortunately, I think so.