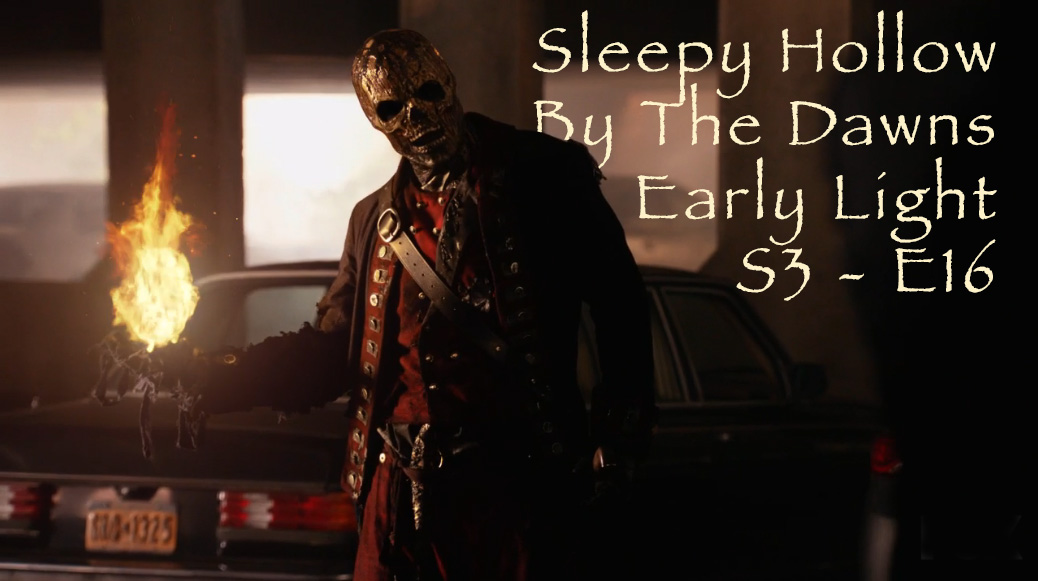 Dawns Early Light was an episode of Sleepy Hollow that reminded me of what I loved about Sleepy Hollow. It really does have everything in it that makes Sleepy Hollow great. It has a creepy monster. It has apocalyptic overtones. It has mysteries about our nations founders and our nations landmarks. (really, why is their a statue of Orpheus adjacent to Fort McHenry?). It had Abbie and Crane working together. It had Jenny and Joe working to support Abbie and Crane. 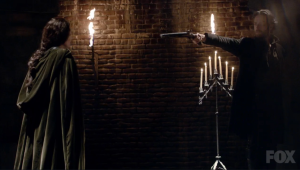 Unfortunately, Dawns Early Light also had a lot of the stuff that has made Sleepy Hollow so frustrating recently. I mean seriously, stop making the “omnipotent god” so stupid. Stop making things happen with little explanation just because you need to push the story along.

Enough of the rant, let’s get to the story of Dawns Early Light. The Hidden One is a bit upset at Pandora for lying to him about the Emblem of Thura. This has turned him into a bit of a beater. And of course, being an evil god hell-bent on destroying mankind doesn’t make him a bad guy, but being an abusive boyfriend… well that is crossing a line.

Pandora needs to put an end to The Hidden One, but she needs the rest of the pieces to her box to do it. So, she heads over to Ichabod’s place and starts rummaging around. Crane finds her and she explains that the Hidden One must be destroyed and she needs the rest of her box to do it. Pandora tells Crane the box can be regenerated in the catacombs. For some reason, he believes her, and calls Abbie to tell her all about it. 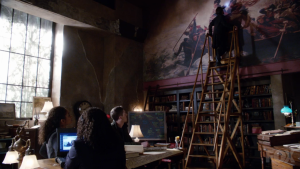 Crane and Abbie figure out that the Washington’s famous crossing of the Deleware was actually when Washington, Paul Revere and Betsy Ross went to the catacombs! (That would have been the time that Revere retrieved the Eye of Anubis from earlier in the season, and Betsy left her cutlass there where Abbie later found it.)

Crane remembers Betsy sewing the first flag of our country before the crossing of the Delaware, and he remembers that she used gold thread. Since Orpheus used a lyre treaded with gold to cross into the underworld, Betsy’s flag must be key.

They figure out that Paul Revere’s house (now a museum) has a Revolutionary War era flag in it’s collection, so they assume it must be it. Abbie and Crane go to retrieve it, but find it to be a forgery. Unfortunately, no one told the hell spawn tar skull monster that was protecting the flag, and Crane accidently awoke it. 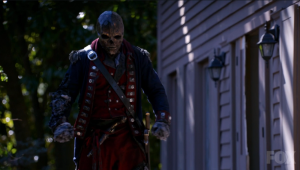 Abbie and Crane head off to Fort McHenry and Abbie plays “The Star Spangled Banner” on the lute in the base of the Orpheus statue. This opens a secret passage to where the real flag is hidden. While retrieving Betsy’s flag, the tar monster comes after them (and he doesn’t notice the flag that he is supposed to be protecting is there). Jenny and Joe show up out of the blue, and Jenny sprays tar monster with a fire extinguisher, then Joe shatters him with a hammer like he is the T-2000. This didn’t make a whole lot of sense to me, but whatever. 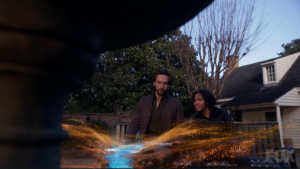 Crane realizes that the line “By the dawns early light” in “The Star Spangled Banner” is another clue, and when holding the flag up at dawn it reveals the route to the catacombs.

I guess this is a “to be continued” sort of thing as next week Abbie and Crane will head off to the catacombs to regenerate Pandora’s Box. (I’ve heard they have laser surgery for that now…)

Overall, there was a lot of great things in this episode. There was also a few things that were just weak from the writers end. The performances were great with Abbie, Crane and even Pandora showing some top notch acting chops in this episode. Despite it’s problems, this was really one of the best episodes this season.