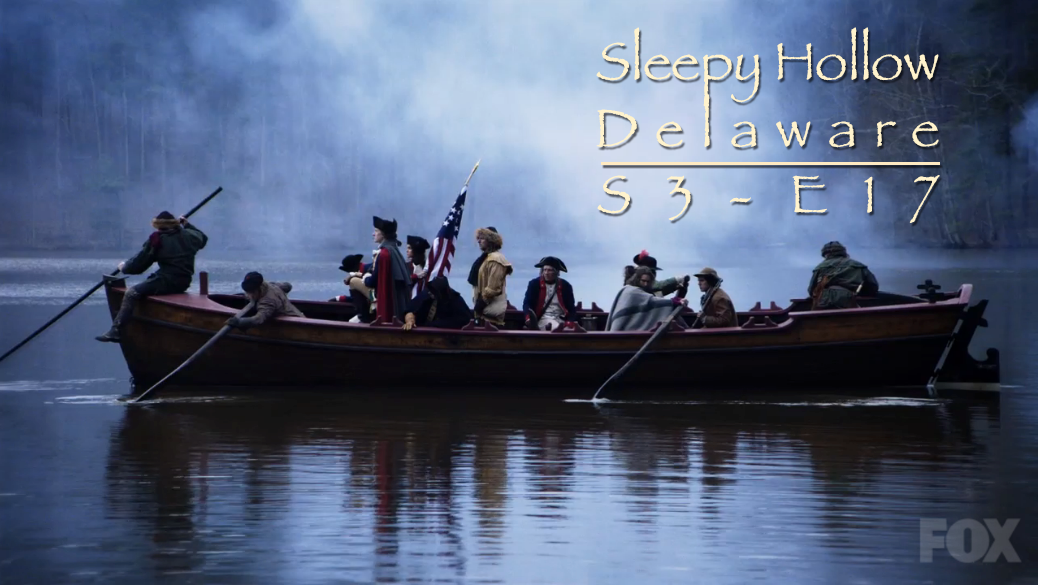 Delaware is the middle of a 3 part season ender for Sleepy Hollow. It isn’t really that good, it has some crazy reveals, and a few shockers. So if you are worried about spoilers, don’t read this until you have seen the episode, then you can come back and we’ll chat… It’s okay, I’ll wait. 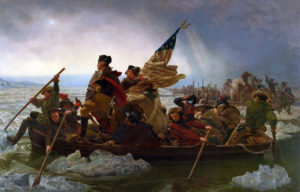 The preceding episode of Sleepy Hollow, Dawn’s Early Light, had everything in it that made Sleepy Hollow great. It had cool colonial monsters, it had conspiracies with out fore fathers, it had secrets hidden in out national treasures. Delaware had none of that. Well okay, it had a little bit, but it was mostly just overflow from last weeks episode. We had that cool shot recreating Washington’s crossing of the Delaware. Sure, the boat is bigger and there is no ice… but they did keep the one guy with his legs over the bow of the ship pushing non-existent ice out of the way…

Abbie and Crane have to head off into the Catacombs to regenerate Pandora’s box, and Pandora, along with Jenny, Joe, Foster, and Reynolds head off to use lay lines to block The Hidden Ones hourglass power. Pandora has a cool little lay line compass to show them they way, and clever banter ensues. The Hidden One senses they are there and summons up some storm clouds. Then we cut to commercial, and when we come back whatever the Hidden One had in store already happened. Not enough budget to pull off the effect? Or not enough imagination to come up with one? I can believe either excuse at this point. 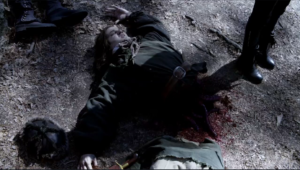 Back on the path to the catacombs, Abbie and Crane make the transition from the Delaware to the river Styx. When they reach the shore, the find the freshly dead members of Washington’s party. Apparently they had a saboteur on board, and he set of an explosive killing many of the crew. And since they are along the river Styx in the land of the dead, they bodies are still as fresh as the day they dies. Except of course, for the saboteur. He is a zombie now, so he looks a bit decomposed (don’t worry, lot’s of things don’t make sense here). The Saboteur attacks crane, but Abbie quickly cuts him in half. His top half then goes after Abbie, but Crane quickly dispatches him.

Back in the land of the living, The Hidden One’s hidden attack (see what I did there) broke Pandora’s Lay Line compass. Jenny remembers Washington’s map at her trailer that shows all the lay lines in the area. Joe rushes back to find it (because there is no time for Jenny to get it and come back). Joe plans to read it, and call in the coordinates (like an air strike). Reynolds sends Jenny to do some recon on the Hidden One while he Pandora and Foster finish setting the stakes. 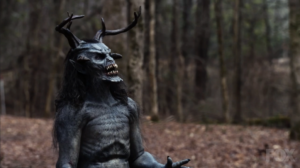 Jenny thinks she can get a clear shot at the hourglass, but the Hidden One senses her. Instead of killing her, he decided to turn Joe fully into the Wendigo (didn’t Pandora suck that out of him a couple episodes ago?). Abbie and Jenny’s dad shows up at the trailer just as Joe is turning into the Wendigo, and somehow Jenny manages to get away from the Hidden One, to her car, and out to her trailer in the minute or so it takes Joe to change (wasn’t it to far to get the map and make it back before time runs out… Time hasn’t run out yet.) Jenny shoots Joe with a tracker bullet(?), and her and her dad escape.

Pandora now goes to the Hidden One to buy the others some time. Reynolds and Foster get the last spike in the lay lines and a force field is created that stops the last grain of sand from falling… for about 10 seconds, until the Hidden One melts all the stakes and makes the force field go away.

Back in the Catacombs, Abbie and Crane find a hidden room (that Abbie never noticed while she was there during the mid season break). In the room, they find Betsy Ross who thinks it has only been a couple months since she was trapped there. 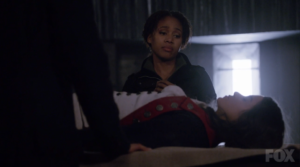 Wasn’t Abbie in there for a few weeks in the real world and it felt like a year to her inside? Then why would 200 years feel like a couple months to Betsy? I get that the writers wanted to clue us in on how Betsy was trapped inside the catacombs for aover 200 years, but shouldn’t someone be saying “hey Betsy, nice story, but when we came here, we had 8 hour in the real world until the end of the real world. We though we had plenty of time because when Abbie was here time in here went 10 times slower then time out there, but now we see for you time in here worked a lot different… so we need to do what we needed to do and get back out there before it’s to late.” 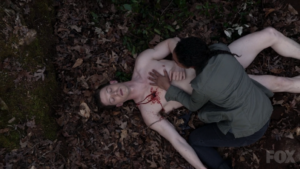 Back on the outside, we find out that Abbie and Jenny’s dad was a monster hunter with Corbin and Nevins all along. (This makes a little bit of sense since Crane found out that being a Witness runs in the family… kinda like a genetic disorder). Papa Mills has all sorts of weaponry and anti monster stuff in a storage unit. They pack up, and try to save Joe. It doesn’t work out to well and Jenny has to shoot and kill Joe. Poor Joe.

On the mountain, The Hidden One has his power and is turning all glow-y red. Will he bring about the end of the world? Will Abbie and Crane stop him? What will Betsy think of cell phones? Tune in next week. 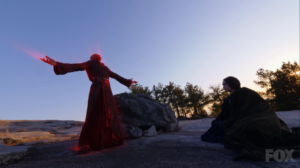 So again, Delaware wasn’t the best episode of Sleepy Hollow. It feels like the writers realized the end of the season was coming, and now they are just trying to tie up all the other storylines in these last episodes. It isn’t like they had a coherent idea running through the entire season… it just seems like “We only have 2 episodes left, what are we going to do about Papa Mills?” If you are a Sleepy Hollow fan, and you’ve come this far, keep watching, it is almost over.