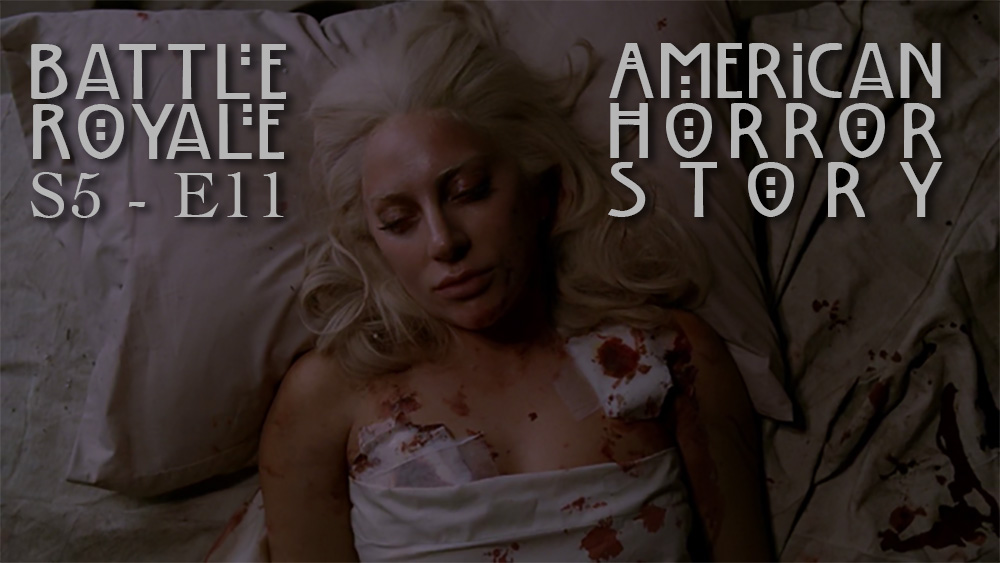 Battle Royale is the 2nd to last episode of American Horror Story Hotel. With a name like Battle Royale, I expected something amazing. Alas, the episode did not live up to my expectations. It was good, just not great. 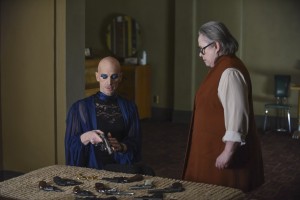 Battle Royale starts off a little bit back in time. We get to see Liz Taylor, and Iris planning out their attack on the Countess that ended last episode. The plan was simple, keep shooting until the Countess is dead. Unfortunately, they failed at that. Donovan managed to jump between the bullets and the Countess and he took the brunt of the assault. Isis freaks out (as any mother who just shot her kid multiple times would) and they stop firing.

The Countess manages to slip away while Donovan begs his mother to take him out of the hotel. He doesn’t want to end up a ghost, stuck in the Corez with all of the Countesses other lovers. (which makes me wonder, if vampires can come back as ghosts if they are killed in the Cortez, and ghosts, like the foreign girls from episode 1, can have sex, then why isn’t Liz Taylor doing the nasty with the ghost of his true love? Why didn’t that guy come back?). Liz and Iris get Donovan out on to the street where he dies.

Sally managed to rescue the Countess, and is helping here with her wounds. She explains that she needs the Countess to go kidnap John’s family and bring them back to the Cortez so that she can get John to come back. She then (finally) goes through her “origin” story. She was hooked up with some grunge band duo in the early 90’s and one day they went to the Cortez and did a lot of drugs and had a three way. Sally got the strange idea that they should sew themselves together and they did. Then her companions over does on drugs and died. For three days she lay there in bed sewn to a pair of corpses. Then her “addiction demon” appeared. She tore herself free, and escaped. (This again makes me wonder, why aren’t they ghosts? And for that matter, didn’t Sally jump out of a window and die on the street? Why is she a ghost?)

Liz and Iris decide that they need help killing the Countess and release Ramona. However, Ramona (who ate all the children) still needs to feed. Lucky for everyone, Queenie comes looking for a room. (Yes, Queenie from American Horror Story: Coven, season 3). Queenie’s uncanny witch powers of being a human voodoo doll make her a tough catch for Ramona, but with the help of James March, Queenie is defeated. (Does the mean Queenie is now a permanent resident of the Cortez? If she is, I would wager that a ghost witch would take that place over in a heartbeat.) James March explains to Ramona that he wants her to kill the Countess as well. Only he wants to make sure she dies in the Cortez so she will be trapped with him forever.

Meanwhile, John is returning home with some fresh food for his wife and son when he discovers them gone. There is, however a key to the Cortez waiting for him. When he arrives, he finds Sally waiting for him. John accuses Sally of kidnapping his family. Sally reminds him that she can’t leave the hotel, and instead blames it on James March. She tells John that he still has one more person to kill for March’s plan. (I wonder why John doesn’t notice that March is a ghost as well, and therefore can’t leave the hotel either. But then again, John did see March at one of the 10 commandment killers crime scenes, but then again, March did explain that he sent the Countess to kidnap Holden in the first place because he couldn’t leave the Hotel… The inconsistencies with the ghost rules is starting to rub me the wrong way). 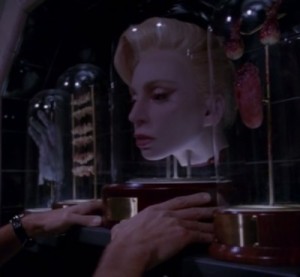 The Countess looks to be making her escape from the Cortez after defeating Ramona (or wearing her out with hot lesbian vampire sex, I am not sure which). As the elevator arrives, and the door opens, John is there waiting. John busts some rounds into the Countess and kills her. (that cop training made him a much better shot then the grandma and the cross dresser). He decapitates her and puts her head in the display case as the10 commandments killers victim #10 “thou Shalt Not Commit Murder”. I know that this is because the Countess has killed multitudes of people over her century long reign at the Cortez, but I still laughed at the idea that Lady Gaga’s head was being used as an example of a murderer. (Lina Morgana)

At this point, Sally tries to kill John so that he will be a ghost and be stuck with her in the Cortez forever. James March stops her.

The episode ends with March and (the now ghost) the Countess having their regularly scheduled dinner. During which Miss Evers admits it was her who led the police to Mr March so that he would die in the hotel and be stuck there with her forever.

This was a good episode overall, and it brought to resolution many of the seasons plot lines. It had some really great moments (Ramona, Queenie, Mr March…) and it had some horrible one (Gaga trying to act). I can’t wait to see how it is all wrapped up next week!