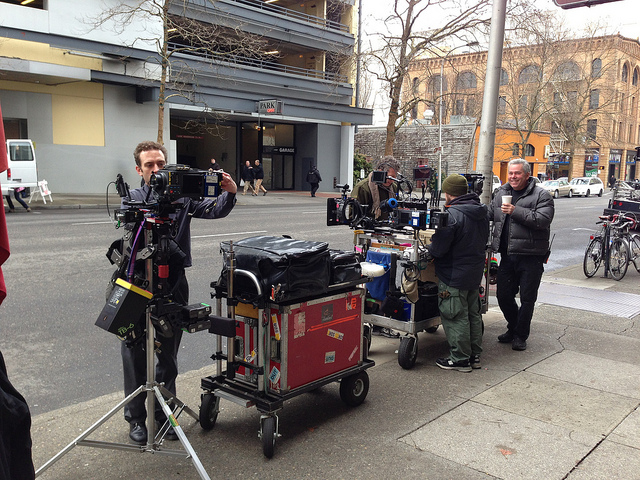 It was last year when the directors of the fantasy TV series Grimm called for extras casting. They hired hundreds of people weekly who are interested in working as a background. All ages (as long as their 18 and above), body types, and levels of experience are welcome to apply.  All roles are paid at varying rates. One can say it’s a concrete stepping stone if you intend to push through an acting career as you learn firsthand information and experience while on set, from directing, acting, and the atmosphere at the scene, time management and dealing with different types of people.

If you find yourself wanting to pack up heading to the Rose City after hearing the entire buzz about Portland, might as well hear expert tips on how to get dialed into the Northwest acting community. Here are some from famous casting director Lana Veenker.

Lana Veenker, who has cast Portland actors in such series as Grimm, shares 8 useful advices for actors new to town. She was also known for her work on Twilight (2008), and The Road (2009).

The one that hit the most sensible note is her straightforward statement, “If you’re relocating from Los Angeles, don’t bring any Hollywood attitude or spin with you. It won’t fly in Portland, where people place value on authenticity and the work. If you’re a jerk, word will spread very quickly in a town this size. Not to mention just because someone spent time in Los Angeles, it doesn’t mean they’re necessarily a better actor.”

She advice to seek and become a member of organizations like the Oregon Media Production Association, the Portland Area Theatre Alliance, and the Alliance of Professional Performers Northwest, and participate in their networking events.

One best way to internalize and find different outlook is by watching plays and films by local companies. There’s a strong indie scene in Portland, so there are plenty of opportunities to see works by regional filmmakers.

You’re now ready to take a deeper step and be more competitive by enrolling to an acting class or workshop. You will most likely be more updated and informed on upcoming audition opportunities, and your coach may even be willing to refer you to a talent agent if you’ve got the chops.

Volunteering for the Oregon Media Production Association or for the various local film festivals, can earn you postive points with industry pros and help build valuable relationships.

Be seen, Expose yourself

Nothing great really started from something big, so take baby steps. If you’re new to town and you want to get seen by the decision makers, you need to be doing theater and indie projects. Your name will soon get known as credits roll.

Positive Can Do Attitude

Move up the ranks quickly by being open, flexible and sincere. Gear up by making preparations, training and credit, soon your efforts will be rewarded.

Trying to get started in extra work