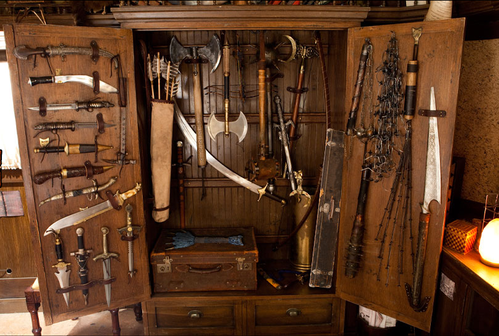 Grimm wouldn’t be the show that it is without the excellent props provided by Drew Pinniger and his team of creative artisans. Aside from props, Pinniger also works on set construction and set design. He has worked on various movies such as Gone, Coraline, Be Cool, Snow Falling on Cedars, Assassins, The Favor, and many more.

He shares his past experiences on how he became a props master, how the props are created and his favorite pieces from Grimm.

How did you get started with props?

DREW PINNIGER: I attended film school at USC and learned much about camera, grip, electric, lighting, and sound, but at the time they didn’t have any Art Department classes. So when I got my first job, on “Northern Exposure,” I was fascinated by the art department and all their tricks and artistry.  In particular, I was drawn to props, and I wanted to learn more about how the prop department integrated the real world into the film environment to help create the illusion of these fantasy worlds. The show’s Property Master, Sean Markland, was my first real mentor in the industry.

What’s the best advice you can give someone who’s interested in prop making?

DREW PINNIGER: I think if you want to spend your life doing props, you need to accept the roll of footsoldier. There’s no glory or awards for props. You’ll be conspiring with actors, directors, producers, really the whole crew, and if you do your job well, you make them all look good while lurking in the shadows of a dark sound stage.

What’s your favorite prop in the show so far?

DREW PINNIGER: I think the Jagerclaws have a special place in my heart because they were really the first prop that I guided from concept through realization. I also worked very closely with my manufacturer, Tim Oakley of Oakley Design, and developed the working relationship and friendship that has grown from that point to the present.

There are also a few items that didn’t see much screen time that I’ve bonded with over the unrealized effort that you pour into some things — and I think it is important to embrace the process even when it doesn’t pay off. We did a custom Afghan in the form of a spider web that didn’t make it into the Spinnatod episode, and a sort of Jules Verne-style stinger bee gun that didn’t get much exposure in a frenetic fight scene in “Beeware.”

Where do you draw inspiration from?

DREW PINNIGER: I try to follow the lead of my production designers and of our Creative Producer Norberto Barba. I have always been a Sci-Fi-Fantasy fan so I love to mix some early influences. My favorite directors have taken on a bunch of my favorite writers, so my aesthetic is sort of a mix of Ridley Scott, Jules Verne, Tolkien, C.S. Lewis, David Lynch, Cronenberg.

Can you describe the process of prop creation for Grimm?

DREW PINNIGER: We don’t have a lot of time to deliver the number of props called for on a given episode, so I always try to pick which ones can really add character to an episode and start pulling images and squiggles on paper to start the evolution of concept without forcing it.  I really enjoy the custom-created props, but I want to be careful that a custom prop meets the common vision of the show runners, our Episode Director, and Norberto, who will give us feedback four or five times sometimes before the props get in front of the camera.