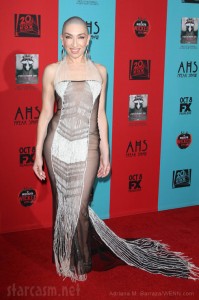 Pepper played by Naomi Grossman on American Horror Story is quite a special character is one of the most talked about creations of Ryan Murphy. There has been much discussion about the one single recurring role on American Horror Story which is of Pepper which gives us the clear drop of hint that there is a prevailing connection between at least two seasons of the show. When Naomi Grossman was asked how much she knew about this little detail, she answered to HuffPost that she was told about her being casted on Freak Show and months later it was revealed that she was to play none other than the ever familiar, Pepper. This was the last thing Grossman expected as the rules of the show till then has been quite consistent. There has not been the repetition of any role but there was this one exception made for Pepper as Grossman stated in her interview, “I knew the rules — which apparently they broke for me.” When asked about the reason for the character’s reoccurrence, Grossman explained, “It’s so hard to say, but I think that they saw the popularity of this character, they decided to clone her by creating Salty, my sidekick, and realized how popular she was. “‘Let’s bring her back. It’s a freak show. Perfect place for her.'”

Playing the role of such an unusual character is quite tough but what adds to the trouble is the look of Pepper. We often wonder how hard it might be to take the mundane look of Naomi Grossman and transform it into the absolutely uncanny form of Pepper. Some of the obvious additions include, the prosthetic ears, the buck teeth and the removal of hair. While the actress does put up a lot of effort to blend with her role, Grossman states in an interview with US Weekly, “People tell me, ‘Oh, I could never [sit so long for of the makeup]. 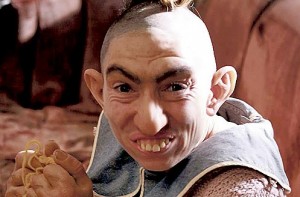 To which I say, ‘Really, you couldn’t go to your job, and lay back and close your eyes for three hours?'” She goes on and explains, “Granted, on a sixth day in a row of shooting, when my skin is super-tender from having glue applied to the same place everyday, I think about how quaint it would be to act with my own face.” But she quickly admits the needs of her character and mentions, “I wouldn’t be Pepper without all those prosthetics. She’s been so good to me, and she’s such a joy to play.”

The popular and much appreciated role of Pepper, however, comes with its drawbacks. Grossman admits, “The one contact lens. It blinds me in that eye, so I’ve been known to take a tumble! Those intense, close-up scenes when I have to look into someone else’s eyes and really communicate? Forget about my eyeline—that’s all over the place.” But the all unnatural look has its perks, Grossman happily attests, “There’s the added benefit of the whole world telling me how pretty I am [offscreen], which is absurd. Though far be it from me to correct them!”