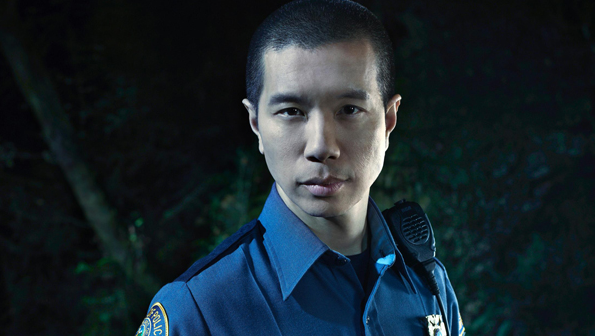 Sgt. Drew Wu (played by the very talented Reggie Lee) is a very special character. He was always in the middle, between normalcy and total lunacy. He was almost always kept in the dark but due to his inherent intelligence and competence, he appears in the show to be a sharp and a very capable guy.

Actor Reggie Lee was very excited to share that the finale would be a cliffhanger filled episode for almost all of the major players.

“Come the season-ender, my friend, this particular season-ender has a cliffhanger for almost every character,” Lee said.

Cliffhangers? They are very welcome because it has already been confirmed that Grimm will have a 4th season. The show, of course, works on the theme that all of the previous scary fairy tale monsters were real. The catch, only a handful of people can see them. Sgt. Wu, who had the misfortune of seeing one, was so shocked that it leads him to question his own sanity.

After his asylum stint Drew Wu is back on the job and keeps telling himself that he’s over it. But he’s not, and the writers of Grimm made sure that at some point he will have to convince himself that what he saw was real.

“I knew there was more character development to come, which is great,” Lee said. “Wu is kind of the balance between human and non-human, it’s normal people and the rest of the Scooby gang. So it’s nice to come out of my shell, so to speak.

“I don’t think I really had expressed that much vulnerability or shock throughout the series. Wu is usually so in control and sarcastic, but this is a different arena for him.”

Reggie Lee is surely an asset. What makes Grimm so fun to watch is you get a show that’s a mixture of everything. Drama, horror, action, suspense, and comedy, which in from my perspective is where Lee excels at. He’s made to be the comedic relief of the show (which every drama needs), but even though his main purpose is to make people laugh, it never diminishes he’s capability to act well in dramatic moments.

One particular moment is when Sgt. Wu encounters the newbie Trubel at the police station. They don’t know each other but when the topic of nightmares was raised, Trubel says “Tell me about it.” There’s a moment and a look on Sgt. Wu’s face that makes you admire him so much more.

“As actors it’s like candy for us, and I love that you noticed it,” Lee said. “I know it’s network television and we’re doing it every week, but I take it very seriously, so it’s great to hear things like that.

“Wu is aching to tell someone, to talk to someone about it. He wants answers or even just a sympathetic ear. He doesn’t want his co-workers to see that he’s ‘weak.’ So who does he go to? He almost went to her. Almost.”

And lastly, what can Reggie Lee say about the season finale?

“This season finale is wonderfully, wonderfully crazy,” Lee said. “With Wu, certainly, I think the fans will get a good kick out of this one.”

[…] article, Reggie Lee on Grimm Season 3 Finale, is syndicated from On Edge TV and is posted here with permission. Repost: The Future of Content […]