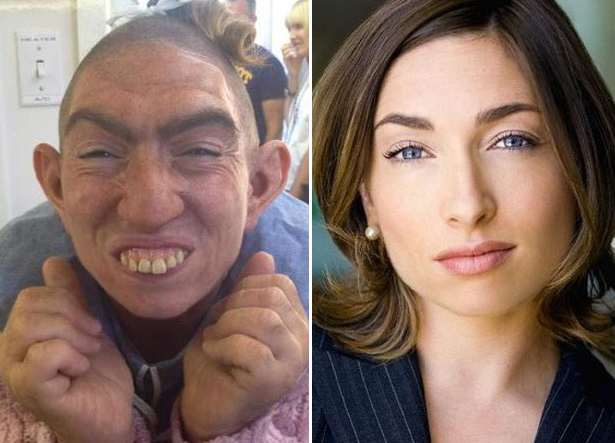 This better left explained by the flasher himself, Evan Peters, from Vulture.com:

“That was literally the first day of shooting. It’s embarrassing that I’m telling you this, but why not? I had to wear a cock sock, right? And since I was wearing a hospital gown, I thought, Well, my front’s not going to be showing. It’s not a big deal. And when they bent me over [laughs], they could see my balls hanging down from the other side. The first day of shooting, and I flash Jessica Lange and Sarah Paulson my balls. Welcome to American Horror Story ! It was ridiculous. I have to put on a cock sock and sheath my balls. Once someone’s seen your balls, it’s over. It’s fine. Everything’s good. They didn’t even say anything. Sarah just walked over after that take and kissed me on the cheek. I was like, Why? What’s happening? That’s when I realized. I was mortified.”

The House on Murder House is a Real Location

You can find the Murder House on 1120 Westchester Place in Los Angeles and it’s known as the Rosenheim Mansion. It was designed by a famous architect named Alfred Rosenheim who used the said house as his own residence. The house scenes in the pilot episode were filmed on location but some of the interior shots were made on sets that replicated the inside of the house.

James Cromwell’s Younger Version is His Own Son

On Asylum, James Cromwell played Nazi Doctor Arthur Arden who was seen as a young Doctor during flashbacks. If you’ve ever wondered why the past Doctor Arden looked exactly like him it’s because Ryan Murphy cast Cromwell’s own son. From EW.com, Cromwell said “Well you have to fucking cast my son — he looks just like me.”

The first season of American Horror Story used scores from horror and suspense greats like Bram Stoker’s Dracula, Psycho, What Lies Beneath, and Insidious. They also used the whistle version of Twisted Nerve and Twisted Nerve.

I don’t know if you ever Googled it but Pepper, you know, the pinhead that was tasked to take care of Grace and the baby by the aliens, looks pretty in real life. Transforming the actress who plays Pepper, Naomi Grossman, takes about 3 hours.

Angela Bassett Had a lot of Face Time in Coven

Although Bassett was just credited as a guest star, she was actually in 12 out of 13 episodes in the third season of American Horror Story. Evan Peters, Lily Rabe, Denis O’Hare, and Frances Conroy, who were part of the main cast, appeared in fewer episodes.

Aside from being handsome and great at acting, Zachary “Spock” Quinto can play the banjo. Everyone at AHS knew about his talent when he started bringing a banjo on set. He said that he started playing during breaks because the atmosphere of the set was so creepy.

Awesome! Naomi Grossman is Brilliant!! I had no idea she was in make up until about a week ago!!

Hello, i think that i saw you visited my blog so i came to “return the favor”.I am attempting to find things to enhance my site!I suppose its ok to use some of your ideas!!}

Virtually all of the things you mention happens to be supprisingly legitimate and that makes me ponder why I hadn’t looked at this with this light previously. This piece truly did turn the light on for me personally as far as this specific subject matter goes. But at this time there is actually just one issue I am not necessarily too cozy with so whilst I attempt to reconcile that with the actual core theme of the point, let me see what the rest of the readers have to point out.Nicely done.