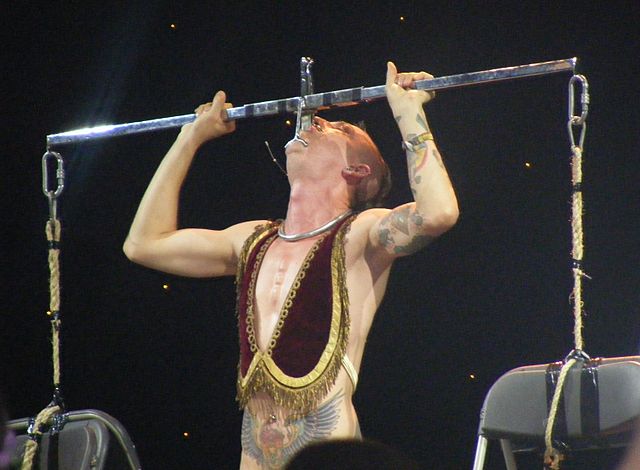 Since we already know the next installment of American Horror Story, we can start speculating what co-creator Ryan Murphy and his writers are going to cook up for next season. There have been hints here and there like Angela Bassett saying that she is open to being either a bearded lady or part of a Siamese twin. Sarah Paulson, on the other hand, said that she is already practicing a “special skill” that she will be performing for Freak Show.

The sword swallower got started when he met a pro in the field. “He gave me two tips, One: It’s extremely dangerous … and tip two: Don’t try it.”

The warning didn’t deter Meyer from trying and after four years of continuous practice, he downed his first sword. After two years, he developed a new system and in which he continued developing for five years until he completely mastered it.

“It took me four years, practicing 10 to 12 times a day, every day,” Meyer said, adding doubt that any “American Horror Story” actor could train enough to do it this season. “[I had] a total of almost 13,000 unsuccessful attempts before I got my first sword down. So I doubt if they’ll be able to get an actor to pull it off very quickly.”

At the present, Meyer performs all over the world. His act has wowed audiences in Harvard, Oxford, and Cambridge. He has been featured in MTV, the Food Network, CNN, ESPN, and Discovery. “I kind of enjoy doing it for the thinking man,” Meyer said.

Meyer admitted that he has never watched American Horror Story, but he is very familiar with the history of freak shows.

“There are two different terms that we use in sideshow,” Meyer said. “One of them is a natural freak or born freak. And one is a self-made freak.”

“So actually those of us that do it, we’re proud to be called freaks,” he explained of the industry. “Proud to do something outside the norm, outside the ordinary.”

Meyer is not a part of American Horror Story: Freak Show, but he says that if they need any help, he is very willing to give his professional assistance and guidance.