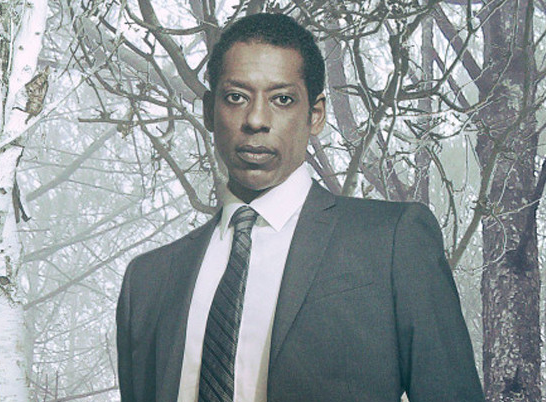 Orlando Jones plays Frank Irving on Fox’s supernatural hit Sleepy Hollow. Last time we saw his character, he was suspected of being a murderer, and without Irving, no one is heading the police department in Sleepy Hollow.

It’s too early to say what will happen to Jones’ character, but based from his shirt from PaleyFest, he wants Frank Irving out of jail. On this interview he shared some words about the show and the importance of the internet for him as an actor and as a fan of his own work.

Is your t-shirt in PaleyFest (Free Frank Irving, with a mug shot of the Captain) an indication of what’s going to happen to your character?

“My T-Shirt is me trying to advocate to the Sleepy Heads that we should break Frank Irving out of prison. If it needs to happen and since he’s a fictional character, I don’t mind to break this particular fake Black dude out of prison.”

Captain Irving is kind of a bad-add, how did you prepare for the role?

“I am actually a deputy sheriff. I’ve been down that road before. I became a licensed deputy sheriff when I was doing a movie with Michael Douglas. I think being tactile with guns and such is important for that type of role. I think mostly when you are carrying that type of power to take somebody’s life on your arm, then that needs to be something that’s going to resonate. That’s the most fun part about the character I think.”

The internet fully supports your show, how do you feel about it?

“No. Not even a bit. The Internet to me is about rebel culture, and I’ve always loved it. When I think of rebel culture, I think of rock-and-roll, or hip-hop; and for a long time now, it’s been the Internet. Everything belongs to everyone now, and everyone gets to have a say. It doesn’t mean the fans are writing the show, but they definitely are watching it and they get to have a say. I don’t get to sit back and pretend I’m too good to talk to them. That’s bullshit. Digital lets us have this conversation and make it as awesome as we want. Why can’t I share fan-fiction? Those fans are artists too, I’m not more or less of an artist than the people who are writing that, or drawing fan art. I’ve believed that for a while, and I felt like this was the time to go, “No, I don’t want it back and I’m happy [the fourth wall] is gone.” It’s one of the most enjoyable experiences. To me, it’s theater. Immediate reaction, the second it’s done. I get to be in my living room with you, trolling my own show.”

Are we going to see a video of you reading Frank Irving fan fiction?

“Here’s what I can promise you: I will get it done. It’s coming this year. I’m working sixteen hours a day, but I’m getting it done. I just got some fan art yesterday that was literally photo-real. It’s ridiculous. In the next 30 days, you will see a lot of new stuff coming out of my crazy camp, that is our sort of “give back to the fanfic world.””