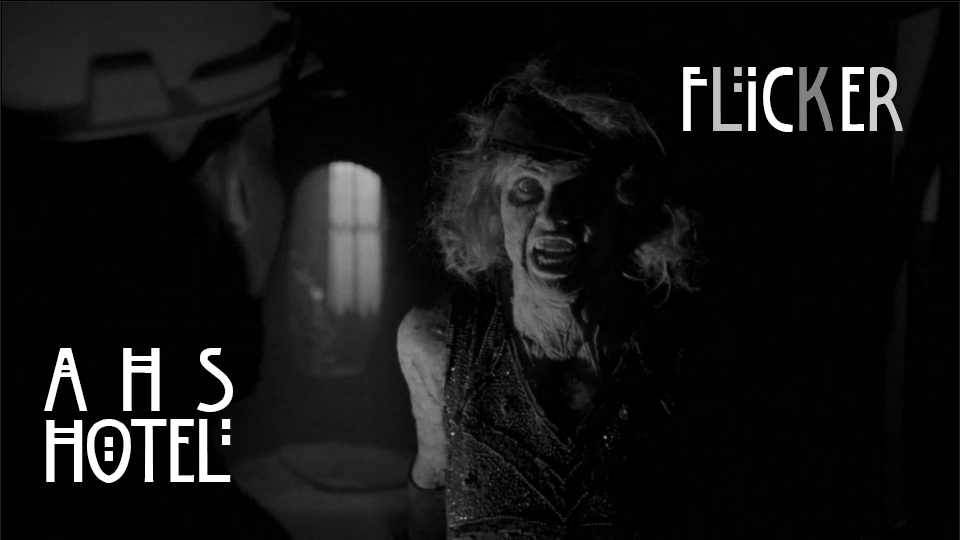 Will Drake ‘s renovations of the Hotel Cortez come to a halt when workers discover a steel wall behind a brick one. When they cut through the steel, they discover a hallway with bricked up doors to the rooms, and some hungry undead.

We then get treated to a flashback to the roaring 20’s in Hollywood where a young and doe-y eyed Countess is an extra in a Valentino movie. Now I don’t know if it is bad directing, or bad writing, or bad acting, but it seams to me that the guy playing Valentino and Lady Gaga are trying to outdo one another with how ridiculous they play these scenes. It is almost unwatchable.

So Valentino and his wife bring in the Countess and make a happy sexy three way. While attending a party at the newly opened Hotel Cortez, the Countess learns that Valentino has died. She tries to kill herself, by is saved by James March. The couple are soon married. It doesn’t take long for the Countess to find out that Mr March is a cold blooded killer, but not only does she not mind, but she supports his pass time.

Eventually, Valentino reveals to the Countess that he had staged his death. He tells her the story of how F.W. Murnau (director of the 1922 vampire film Nosferatu) infected Valentino with the vampire virus. He offers to infect the Countess so they can be together forever.

Mr March overhears, and is not pleased. He seals them up in the Cortez, and that is how we got to the beginning of the episode.

Valentino and his wife continue to off some hotel guests until they are feeling better, and then off they go into the world of the 21st century.

We also find John the crazy cop with a bit of story in this episode. He has gotten himself committed to a mental hospital for treatment. However, we soon learn that he is not there for treatment, but because a suspect in the 10 commandments killing is locked up in the same mental hospital. 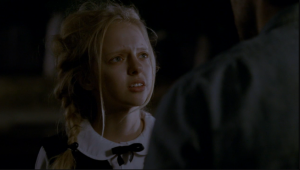 John disables a guard, and gets into see the suspect, and it is a little girl named Red. (*editors note: the little girl is named Ren, but I didn’t figure that out until the next episode) She is about the same age, and kinda looks like John’s daughter Scarlett… that is a blatant hint isn’t it?

So Red reveals that her father left her in the car back in the 1980’s and the Countess saved her. She said she would reveal the killer to John back at the Cortez. All the while, Red has a look on her face as if to say “why are you asking me who the killer is… it’s you”.

John and Red escape the mental hospital, and on the way to the Cortez, Red jumps in front of a bus.

It seems like they writers are not even trying to hide the fact that John is the 10 Commandments Killer. (I mean, he was invited to James March’s serial killer dinner, wasn’t he?). And a killer who kills people that violated the 10 commandments, but got away with it under secular law, would consider himself an enforcer of Gods law… so he is still a cop in his mind, not a serial killer.

Anyway, sadly missing from this weeks episode was Ramona, Liz, and Sally. We can assume Liz is hiding out still upset over last weeks episode. Ramona is trying to come up with a new plan (since last weeks didn’t work out to well), but where is Sally?