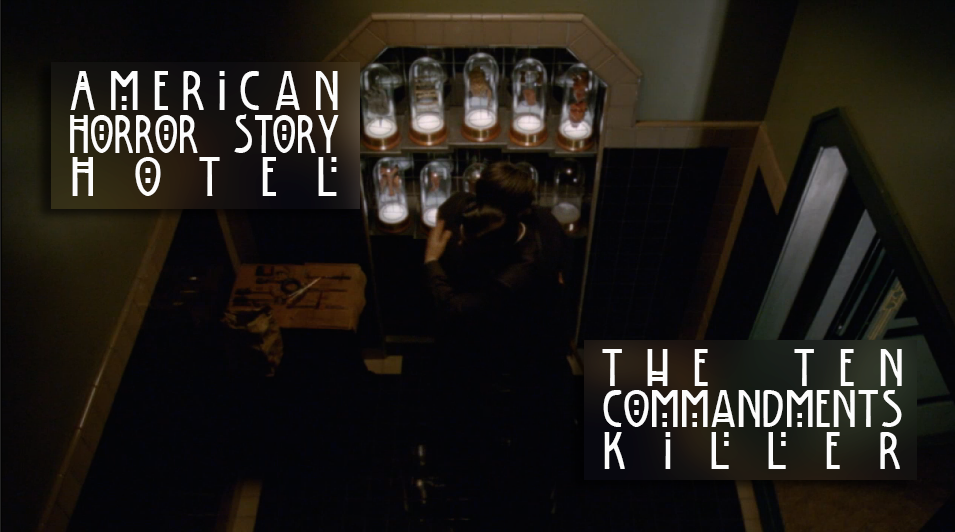 The 8th episode of American Horror Story: Hotel finally (officially) reveals who the 10Commandments Killer is. If you have been following my reviews this season, you will remember that I called this one back on the “Devils Night” episode. When did you figure it out? 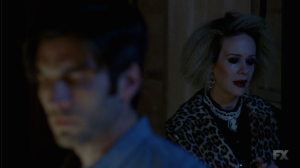 After Ren (whom I mistakenly thought was named Red in last weeks review), leapt in front of a bus, Detective John heads to the Cortez to find answers. Sally brings him up to his old room and shows him James March’s secret trophy room with the collection of parts from the victims of the Ten Commandments Killer. She then reveals to him that the killer has been [SPOILER ALERT] him all along.

Once John accepts that he is a psychotic killer, he heads to the morgue to find his cop partner with the corpse of little Ren. There he confesses and tells, through flashback, of how he first stumbled upon the hotel Cortez 5 years prior after the being called to the crime scene where the father had killed himself after his kids died from carbon monoxide poisoning because he had a generator running in the house to keep them warm. (he told the story of this case in a previous episode.

John was so distraught by what he had seen that he just wanted to drink himself into a stupor. There, he meets Liz Taylor, Sally, The Countess, and James March. Mr March and John become best buddies over some Absinthe and after a couple days of drunkenness John heads home without remembering a thing.

James sees the potential in John and knows he just needs a little push to become the serial killer he has been waiting for. He instructs the Countess to give him that push, and she proceeds to kidnap John’s son Holden.

This sends John into a downward spiral that sends him back to the Cortez over and over. While there, he drinks with James and cheats on his wife with Sally. When he leaves the Cortez, he never remembers a thing.

On the 5th anniversary of Holden’s disappearance, James March pushes John over the edge by showing telling him about a pedophile that has been frequenting the hotel with a boy the same age as Holden. John kills the man, and the 10 Commandments killer is reborn. 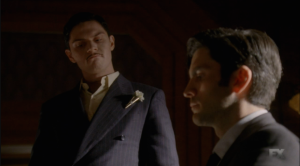 Johns partner thinks John is having a mental breakdown and imagining himself to be the killer. His doubts are quickly put to rest when John stabs him in the gut for “coveting” Alex. John takes his trophy and heads back to the Cortez fully aware of his murderous tendencies (much to the relief of Iris who explain how much of a pain it was trying to figure if John the killer, or John the cop was coming in every time John showed up…)

What else happened in this episode? Not much really. For the most part this was just a rehash of what we have already seen. Although for the first time in a while, the rehash actually put all the pieces together in a nice cohesive order. (Accept the school full of vampire kids… what happened to them? And where has Ramona been? And what happened to Valentino?) But if you have been watching the whole season, you have seen it already.

We learned that Sally has some sort of arrangement with March that might prove interesting in future episodes. After John commits his first murder, he tries to hang himself at the Cortez. Sally happily waits for him to give up the ghost so they can be together forever. March comes in and saves John and tells Sally “He’s not yours. Not yet, Or have you forgotten our little arrangement? My protection comes with a price. This demon that you and your kind have conjured with your diseased acts needs to feed, if not on others, then on you, dear Sally.” I sure hope we get to see what that is all about in the upcoming episodes.

Overall, this episode was really worth watching for Even Peters performance as James March. It is really the best part of the show. His quirks and expressions are spot on, and truly a joy to watch.