Remember last episode when Norman was stuck in Shelby’s house when he enters the house? This episode takes off right from there. The twist is that when Norman was walking down towards Shelby’s house, Dylan had spotted him while he was getting home on his bike. What happens next? Well, keep reading, Spoilers ahead! 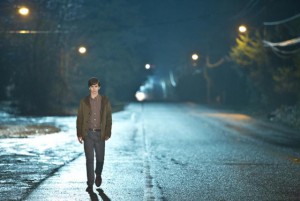 Dylan follows Norman finding him sneaking into the house, not so much sneaking with all the noise due to his clumsiness. As soon as the deputy enters the house, Dylan realizes what kind of trouble his brother was about to get into and comes up with a plan. He quickly knocks on Shelby’s door and pretends that his bike has run out of gas. Shelby gives him a quick direction to the shell station and tries to return to the noises from his basement. Dylan nervously looks around the back waiting for his brother to come out or his dead body to be thrown out. Norman somehow manages to free himself from the girl’s grip and promises to come back for her when he jumps out of the window and rushes out through the back. Dylan quietly watches as his brother runs off into the darkness and decides to interrogate him back at their place. Dylan waited for his brother and on his return, asked him why he was at the cop’s house. Norman refuses to disclose any information to his brother and sets off.

Later, however, when Norman is more upset with his mother when he learns that Keith’s murder was no self-defense, Norman babbles out a lot to Dylan than any of us ever expected. The assault, the murder, the belt, the Chinese girl, Shelby’s involvement with their mother; Norman leaves nothing out. In this episode we learn that Bradley’s father has passed away and she is comforted by Norman, which is probably why she texts him while the brothers are chatting and Dylan tells Norman to live the casual life of an average teenager for a change and go off to visit Bradley. Norman hesitates, considering all that the family issues that have been going on but eventually goes over. Bradley seems happy to see him and the two spend the night. 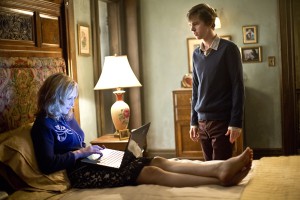 Things with Norma couldn’t get any worse. She hears from Norman about the basement incident and is absolutely skeptic. She reveals to Norman that he sometimes imagines things. He believes certain things are there when they actually do not exist. Norman is upset upon the news and later even shows the mark the Chinese girl had left on his ankle, quite a grip she had, I must say. Norma tells Norman that it was going to be okay, like she does in every single case. Norma forcefully sends Norman off to fishing with Zack Shelby. Shelby acts more or less friendly but the Norman doesn’t like the thought of Zack and his mother together.

Aside from that, Norma is taken in by the cops for interrogation on the Keith Summers case. The cops have discovered a severed hand with a watch. It wasn’t a tough job to figure out who the hand belonged to. Romero asks Norma about the carpet fiber they had managed to collect from beneath the watch on the severed hand. Norma, still refusing that she had anything to do with the murder, refuses to help when the sheriff asks where she had dumped the old carpets from her motel rooms. 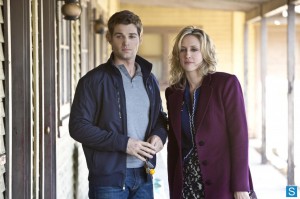 Norma walked out and went to look for the carpets the cops were after, because if the fiber samples matched then she would be in for a lot of trouble. She and Norman found the dumpster but it was locked, seeing witch, Norma starts screaming like a crazy woman at the top of her voice. At this point Norman starts telling her how it was her fault for not going to the police with a case of self-defense. This is when Norma reveals that it was no self-defending act; she killed Keith because she was angry. Norma cries and says that she had always had to put up with things and how she was tired of it. Despite all the madness in Norma, you can’t help but feel a little sorry for the poor woman. It adds more to her miseries when she learns from Dylan that Norman had headed to a girl’s house late at night. Norma slaps Dylan when he says that the girl is taking Norman away from his mother, Norma. The doorbell interrupts the mother son fight. Norma finds the cops at the doorstep who came to arrest her.