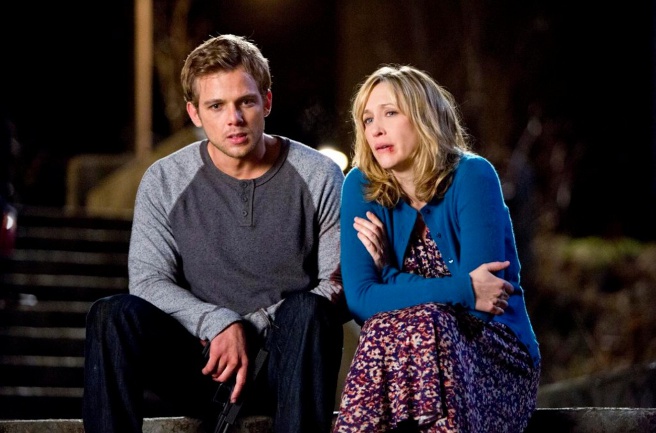 Again, another unexpectedly amazing episode! This episode answers a few questions, raises some, resolves some issues, has more thrill than any of the other episodes, there is death and unfolding of secrets. Could we have asked for more? I doubt it! Spoiler Alert, before I spill the beans!

The episode begins with a startled and deceived Norma. Emma tells Norman how hard it is when a guy you are into turns out to be a monster like that. We can’t help but think, that is exactly what Emma is destined for. Norma suddenly runs off and tries to drive to Shelby and keeps screaming and saying how it is unfair how people can get away with doing whatever they feel like doing. It is a bit of a comic relief when you see the mother-son duo going round and round with their car as Norman tries to stop his out-of-control mother from leaving. Norman succeeds in stopping the woman by throwing out the car keys. Norman then promises that Shelby will be served justice. 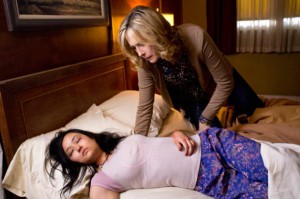 Later things seem much more settled, Norma is checking on the Chinese girl, named Jiao and she takes a look at all the marks on hand of the sleeping girl. Norma goes upto Emma and Norman and tells them that the girl needs to rest for now even though Emma is determined to take Jiao to the police then and then. It is hard manipulating the girl who is more than keen to drag Jiao to the FBI and Norma even uses up her harsh tone. Finally Norma managed to send Emma home by assuring her that they would go to the cops next morning. Norma and Emma are seen sharing a heartwarming hug when Norma learnt form Emma that her mother had left her. Just as you are about to say, “Nicely done, Norma Bates”, we get to visit the version of her which we are more familiar with. As soon as Emma drives away, Norma tells Norman that there was no way they were going to the police with Jiao. Her plan is to atleast find the belt before they can make any moves.

Norma is all dressed up and preparing to pay Shelby a visit to try to get Keith’s belt out of him somehow.  In the nick of time, Dylan comes and saves the day by telling Norma that she could rub the lipstick off and that he and Norman would go find the belt by themselves. Dylan is actually doing quite well not that he is assistant to no one and he has someone working under him. It is quite fun to watch the kind of conversation the new work buddies have. I’m hoping to see more funny scenes of the duo! Dylan has quite some status in the eyes of his boss, Gill, who is impressed by seeing how the newbie took care of the murderer of his partner. Hell, even I’m impressed! Dylan does an even better job at the boat, where he and brother are looking for the belt. They discover the belt from an odd spot and Dylan throws it into the river, promising that it was never to be found again! Norman it convinced, quite too convinced. Norman seems to be considering his brother’s proposal of leaving the motel and their mother and live in the place with the ocean which Dylan had already rented. 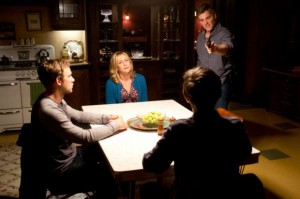 In the meanwhile, back at the motel, Deputy Shelby can’t seem to keep his mind/hand off Norma. Shelby pays Norma a visit at the motel and even though the woman warns him that it was risky for them to meet, Shelby won’t listen. The two are at one of the motel rooms, Shelby enjoying himself while Norma is indifferent, when Shelby suddenly hears the sound of water running through the pipes. He asked Norma and she made the biggest mistake that there was no one else at the motel. Shelby pulls out his gun and goes off looking for the source of the noise. Just as Shelby is standing outside the room in which Jiao is, Norma tells Shelby that she just remembered that she had rented the house to some painter. As much as we are hoping that Shelby is naïve enough to believe her, he’s not. He asks her why she’s lying to him and curses him as Jiao comes out of the room hearing the knocks on her door. Jiao then runs off into the woods, followed by Shelby. If you ask me, Norma wasn’t putting up much of an effort to save the poor girl anyway. Starting from the decision to not take her to the cops without delay, to not making up a more believable story, Norma never really cared much. 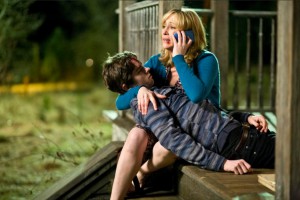 Dylan and Norman come to the motel immediately after the Shelby takes off after Jiao. When Dylan tells Norman to pack up and leave with him, Norma can hardly give importance to the girl who is about to be killed and starts asking all sorts of questions about why Norman would leave. Norman and Dylan are shaken by the idea of the dangerous Shelby running around with a gun and just as they are about to make a run for their lives, Shelby is back for them. They are made to go back to the house and sit around the dinner table while Shelby decides on whom to kill first. Shelby is outraged because of his girlfriend’s betrayal and at point starts hitting Norma. That was it! That was enough to get Norma’s brain to stop functioning and his alter ego to take over. Norman hits the man hard but eventually ends up flat on the ground himself. Norma gets busy crying over her boy’s body and calling 911 while Dylan and Shelby start a little game of action. Let’s cut it short here. Dylan achieves victory by successfully murdering Deputy Shelby and putting his family out of misery for which he is rewarded by a warm hug from mommy dear! 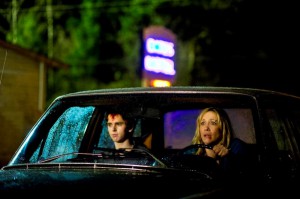 So now Norman seems to be in a different universe and Norma and Dylan have a quick chat over the delusional kid. Dylan still thinks that Norma killed Norman’s father Sam. Norma finally reveals the mystery behind the history of her husband’s death. Norman showed quite the same characteristics on the day his father died. Apparently Norman parents had quite a fight and Sam ended up hitting Norma. Thus Norman entered his trance mode and applied a hard blow on the back of his father’s head. Sam fell flat on the ground, dead. Dylan hears the story and is taken aback. and something tells me he’s quitting the idea of moving into a house with just him and his brother.

The cops finally arrive! And we’ll let you know what happens in the next episode in our next review. Till then, stay safe and love the Bates!