Shadow of a Doubt

To review a little, Miss Watson holds more mysteries and her death can cause greater consequences than we had presumed. Not only is her murderer still walking free but we also are unveiling darkest secrets in this episode. We already know that she was Gil’s girlfriend and despite that, had an affair with Mr. Martin, Bradley’s dad. So, from what we can guess, Gil could have murdered Mr. Martin in a jealous rage, and to punish him of that sin, Bradley shot Gil in the prior episode. The show never misses an opportunity of reflecting on the saying, ‘an eye for an eye,’ I must say! So, after committing her first murder, Bradley turns to her old bud, Norman, for help.

And now, getting to the second episode of the season, Bradley is asleep, in Norman’s basement. “I killed the guy that killed my dad,” she tells Norman.

Dylan finds about his boss’s death from the Sheriff and you can just tell from his face that he knows more about this than he is letting out. I mean, just a day after he notifies Bradley that Gil was the potential murderer of her dad, the man gets brutally shot in the head, what are the odds?! Remo thinks the other operation, their enemies, had their hands behind the death of Gil. 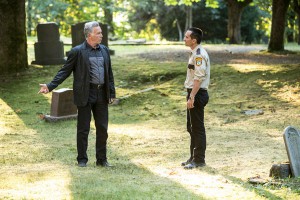 The White Pine Bay graveyard is now quite a busy place. Sheriff Romero is meeting the mystery man who Norman suspected to be Blaire Watson’s killer. On the contrary to that, the man, being Blaire’s father, is himself on a search for the guilty one. Sheriff Romero informs Blaire’s father, Nick, that Gil has been killed and the man’s first reaction is, “We had nothing to do with it.” So does this mean he belongs to the other operation that Remo was talking about? Nick accuses the Sheriff to prioritize Gil’s case over his daughter’s simply because Blaire was an ordinary school teacher while Gil was a big player in the drug game. It had already been four months since Blaire Watson’s decease and there were zero outcomes from the cops’ side. The Sheriff attempts to deny the accusations and says that Blaire did not exactly have a simple lifestyle but we already do know that by now and apparently, so does her father. Nick walks away, mildly threatening that the city would no longer be the same old quiet place for much longer if something hadn’t been done soon enough. 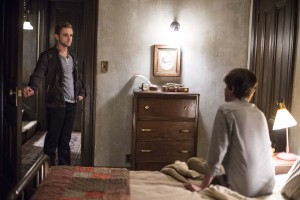 Norma tries to talk Norman into doing a musical. He swallows hard and tries to convince his mother that it was a bad idea, when the phone rings with Bradley’s mother on the other side. He lies to her saying that he didn’t speak to her or see her and then lies again to Dylan about the same thing when the elder brother gives a shot at trying to get the truth out of him. Norma is still insistent about doing the musical and even though Norman resists for a while, he ends up singing ‘Mr. Sandman’ and it was absolutely ADORABLE!! So, Norman agrees to do it for the sake of his mother. 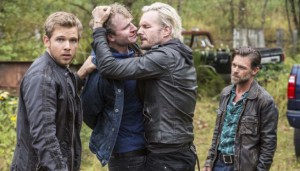 In another world, Gil’s brother, Zane, has come to take over the business and Remo certainly isn’t happy about it. The new boss talks about cleaning the mess his brother created as you cannot get yourself killed in this line of business. Zane brings a guy called Johnny B, one of the guys from his enemy party. Then Zane kills the man, supposedly, killing the messenger sends the message.

After such a long period of failure, the cops have finally caught a break in the Blaire Watson case, quite a convenient timing I have to say. The Sheriff brings a man named Kyle into interrogation. Apparently they had found the guy’s semen sample in Blaire Watson’s body but surprisingly his wasn’t the only semen sample found. They had found two of those. Kyle tells Romero that Blaire slept with a lot of different men but that doesn’t win him his freedom. Romero, after giving some thought into it, tells Kyle that he was going to charge the man with Blaire Watson’s murder just for the sake of solving the case and to avoid certain consequences. Kyle is flabbergasted but seems like the Sheriff has his mind made up. 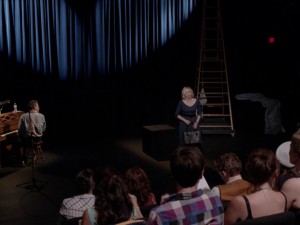 Norma finds a newspaper cutting of Miss Watson’s picture and her pearl necklace while cleaning. Then the mother son duo goes for the auditions of the musical. The list of people for auditions quite long which gets Norman worried as he needs leave with Bradley for the station by 8. So, Norman freaks out between the auditions and walks out of the theatre and when his mother says that she just wants to do something fun with her son, Norman replies by yelling out that, “Mother, we live together. We work together. We have every meal together. We sleep six inches away from each other with a thin wall between us. Don’t you think that’s probably enough!” Then Norman brings up the topic of the necklace she had found and Norman says that he found it in his pocket in the next morning and that he remembered nothing more about it. Norma then starts crying absurdly which makes me awkward. Norman, being the hero of the episode, consoles his mother and tells her that they were going to do this thing. He sends his into the theatre and calls his brother. He asks Dylan to take Bradley to the bus which will take her to Boston. Dylan learns about Bradley killing his boss. He then takes the, now, dark haired Bradley to catch her bus. In the meantime, Norma gives quite a performance on ‘Maybe This Time,’ which you shouldn’t miss. So, checkout Norma Bates singing by clicking right here. 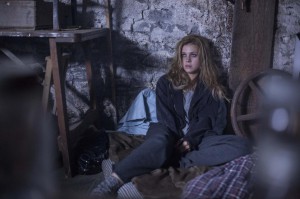 Before Bradley gets on the bus, Dylan makes her write a suicide note which he could use to stop everyone from looking for Gil’s murderer and hurt innocent people. So, Bradley actually leaves but before she does, she leaves a note for Norman which says- ‘Norman, you are the best person I’ve ever known’. The note puts a smile on Norman’s face and ours. But that smile is wiped off clean as soon as we see the new addition to the episode. It is none other than Norma’s brother, looking for his sister. Considering the backstory Norma had given about her incest brother, I can’t wait to see what is about to happen next in the upcoming episodes of Bates Motel.