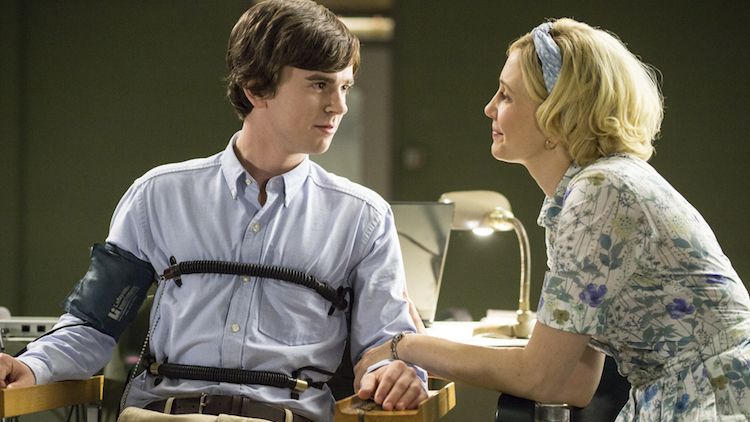 So it’s official. The second season of Bates Motel has finally reached its inevitable end bringing forth the indisputable truth. It’s time to say goodbye to it but not before we have fully analyzed it from top to bottom, after all, we do need closure. 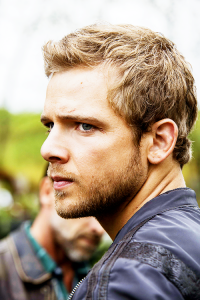 At the beginning of the episode, we find Norman, still inside the box, chanting “Help me, please. Help me,” while help is on its way. Dylan encounters Sheriff Romero who is on his was to Nick’s after he learnt from Norma that Norman had been had been abducted by Nick. Dylan’s first reflex upon seeing Romero is confessing that he killed Nick Ford. Romero and Dylan go back to Nick’s place. 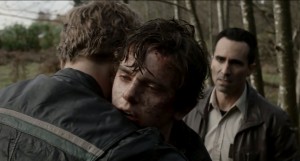 The sheriff finds one of Nick’s men, Ben, emptying his boss’s safe and when he is reluctant to reveal where Norman is, Romero tells him that it’s all over now and that now it couldn’t make sense to jeopardize Ben’s own life for no apparent cause. Alex Romero successfully acquires the location and liberates the poor boy from the box. I love this scene where Dylan screams his brother’s name at the top of his voice and after quite some struggle Norman manages to scream out his brother’s name. Dylan takes his brother out of the box and the brothers engage in a loving embrace where affection and compassion is surfacing on Dylan’s face.

While Norman is in the hospital, Norma comes to visit her son and when she learns that Dylan saved him, she tells Dylan how much she loves him for doing it. Norman reveals to his mother that Blaire Watson’s father had him put inside the box and tries to speak of the memories that came back to him while he was there but he is cut in by Norma, who tells him that it was all a dream which he had to forget about. Norman then dozes off leaving the rest of the story unfinished, for now. 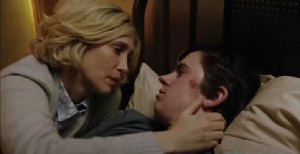 When they get back home from the hospital Norma lies yet again to Emma, telling her that Norman had the stomach flu. Norma ten informs her son that Emma has decided to quit her job at the motel she excluded from the matters concerning the Bates. Norma tucks her boy in bed and goes shopping where she encounters Christine, who is furious at her for things Norma had said to George. It seems as though the council seat is about to slip from underneath Norma as the mayor is, apparently, about to visit Christine’s place and she has lots of words to put in for Norma, though none of them too good.

Christine called Norma a ‘train-wreck’. So, Norma goes home, still hung up on the conversation they had. She tells Norman about it and mentions that she “tried to sleep with” George. Norma! That’s not something he needs right now and how many more times do you need to sleep with someone before you can call it that? 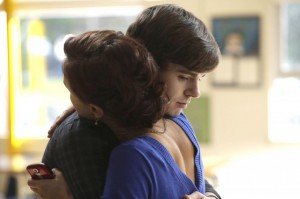 Norman makes his next attempt to take about the memories but before he can finish, Norma tells him that she knew about him sleeping with Miss Watson and also mentions that Romero wanted him to take a polygraph test to prove that he is not guilty. “You slept with her, you didn’t kill her,” says Norma. He gives her the ‘oh, you wish, mother’ look and tells her that he say that night reoccurring right before his eyes when he was trapped inside the box. Norma argues that those were mere hallucinations but Norman knows better. 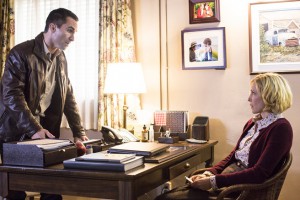 He can now see himself more clearly than he ever had and now he realizes that the pieces of the puzzle fit this way. He knows what he had done but Norma goes neurotic and screams for him to stop confessing. Norma is in denial, like she always is. May be that is where her son gets his keenness to create a make-believe world where nothing goes wrong and “everything is okay” all the time.

Norma watches her dysfunctional son sleep and later when Alex Romero comes with schedule of the polygraph test and before Norma can make excuses to get out of it, Romero says that he needs to be certain that the man he convicted for the murder of Blaire Watson is in fact the real murderer and the only way he will be convinced if the polygraph test was passed by her son. 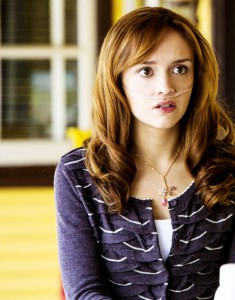 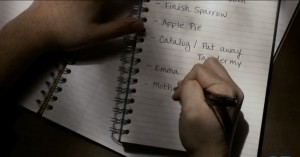 Norman, on the other hand, is making a checklist of things he needs to accomplish and the list contains organize bedroom, finish Sparrow, apple pie, catalog/put away taxidermy, Emma and Mother. He feels it’s time to make Emma feel included, so he tells her about his mother getting raped by Caleb and about Dylan being their son. Out of all the secrets that the Bates family holds, he gives this one out and asks Emma to reconsider her decision about leaving her job at the motel. Probably, because this is the only secret that doesn’t concern him, and Emma couldn’t judge him on this one. As for ‘mother,’ Norman makes his mother dance with him on Dream Lover by Bobby Darin and tells her that she is the best mother in the world. 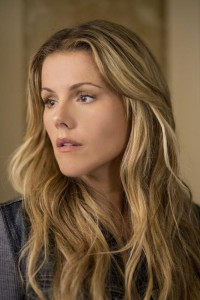 Dylan and Romero seem to have joined forces as they make Jodi call Zane, telling him that Nick was dead and asking him to come over. When Zane realizes that it was all a set up, he shoots his own sister. Dylan watches as she dies and Romero comes out to take him long-awaited revenge. The Sheriff shoots Zane, bringing a halt to the drug war. Romero makes up a story about how all the deaths took place and Dylan is not in any part of the story. Romero lets him go clean and explains that there is a vacuum in the town which needed to be filled by someone like Dylan, someone who understood all the rules. So, does this mean Dylan is going to be the new drug lord of the town?

Dylan and Norma speak about Norman’s new situation and Norman has decided to flee with her two sons before Romero busts Norman at the polygraph test. Norma apologizes to Dylan for how she treated him throughout the course of his life and I agree with her when she says that he is beautiful. She also mentions that it is a miracle how he is still going through life so steadily, in spite of everything that he had to tolerate. Dylan embraces his mother and they are both on tears. This is such a beautiful moment, probably the best in the entire show. Dylan convinces his mother that Norman had to take the test and if help is what he required then help is what they will seek. 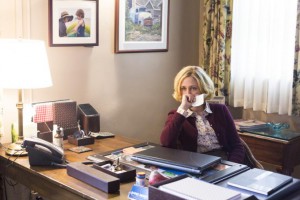 Norma returns home to find a note from Norman which said ‘…I will always love you and we will always be part of part of each other.’ It doesn’t take her long to realize that it was very much of a goodbye note and she runs to find her son. Norma learns from Emma that Norman had headed towards the wood. Norma runs into the woods and catches her son, pinning him to the ground while he has a gun in his hand. Norman says that he doesn’t want to hurt is mother, which is why he needs to go through with the suicide mission. Norma tries to talk him out of it by saying that he doesn’t do the wrong deeds on purpose; he is just confused by the blackouts. Norman then asks about the day his father died, as he also had a black out then. Norma agrees to trade information for the gun and Norman hands it over. Norma finally tells him that he did what he had to in order to protect his mother. And yet one more time, she tells him that we are the same person, and that she would die if he tries to kill himself. So, Norman finally gives up his suicide mission.

Norma and her sons go for the polygraph test where Sheriff Romero is waiting for them. Romero’s father’s friend, Declan Rogers, taking the exam asks questions: 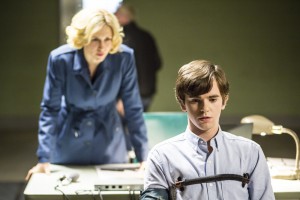 Rogers: Is your name Norman Bates?

Rogers: Do you live in White Pine Bay?

Rogers: Do you intend to answer each question truthfully?

Rogers: Did you ever tell a lie to someone who trusted you?

Rogers: Have you ever stolen money? 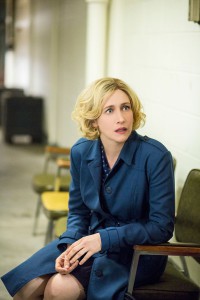 Rogers: Did you know a woman named Blaire Watson?

Rogers: Have you ever had sex with one of your teachers?

Rogers: Was this teacher Blaire Watson?

Rogers: Have you ever physically harmed another person?

Rogers: Have you ever withheld information from others regarding a crime?

Rogers: Did you kill Blaire Watson

[[Norman then hallucinates and he imagines Norma, sitting next to him.

Norma: Norman, you need to know something very important. You didn’t kill Blaire Watson. I did. You have to keep this a secret. Do you promise?

Rogers: Did you hear my question?

Rogers: Did you kill Blaire Watson?

Rogers then comes out and informs everyone that Norman passed the test, clearing him form any blame.

This was the first time Norman had imagined Norma in full consciousness. There were no blackouts or anything and he still saw and believed that she was there with him. Norman is definitely delusional as he did not lie when he said he did not kill Blaire Watson, he actually believes that his mother did it. Norman does truly think that his mother lives within him. Just when we thought the truth about himself would help him accept the reality, Norman goes further into the abyss and lets his inner demon take over.

How far will this go? We have no option but to wait till the next season and find out. It’s time to shut the Motel close. See you later Motel guests!