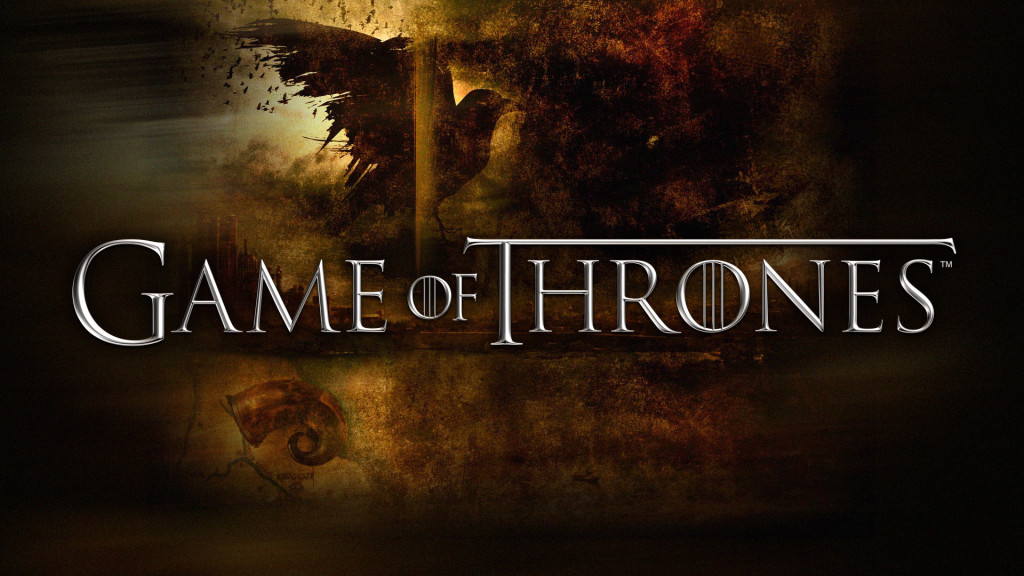 It’s Getting Deep in Kings Landing 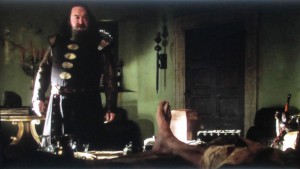 So we open with Ned Stark in bed waking up after his run in with Jamie Lannister on last weeks episode. King Robert, and Queen Cersi are in the room, and Cersi accuses Ned of leaving the brothel drunk and attacking Jamie.

King Robert takes Neds side, and smacks Cersi around a bit, but he concedes to Ned that he is in to great of debt to the Lannisters, so things will go their way. However, he reinstates Ned as the Kings Hand, and threatens to make Jamie Lannister the Hand if Ned ever takes it off again.

Across the narrow sea we find Daenerys playing with her petrified dragon eggs. She puts one on the coals of a fire, and as a slave girl walks in, she removes it. The slave girl, seeing Daenerys pulling the egg from the coals, rushes over to take the hot potato… errr Dragon egg, from Daenerys. The slave girl burns her hands. Daenerys doesn’t.

In The Great White North

Back up in Winterfell, Bran is still dreaming about 3 eyed ravens. This time he is awoken by Hodor who has his gimp saddle ready for him. Bran, Rob Stark, and Theon Greyjoy go out to try out the new sadle, and while Bran is riding alone, he gets attacked by the background actors from the Monty Python “Constitutional Peasent” sketch.  After killing all but one (the woman), and giving us some more Theon angst, We head back to Winterfell.

As we Dance Around the & Kingdoms

So Daenerys Eats a raw horse heart, while all the Dothraki cheer her on. This pisses off her brother. Because he sees his sister becoming the leader he always wanted to be.

Tyrion is still stuck in the cell on the side of the cliff. He tell the guard he wants to confess, and when brought before Catelyn Stark, and her sister Lysa Arryn, He gives a confesion to all manner of mischief, included a hysterical story about how he masturbated into Turtle stew that he thinks his sister ate.

Eventually Tyrion connives his way into a trial by combat with a champion.  After his Champion is victorious, Tyrion heads off for Kings Landing.

The King is off hunting, and he left Ned in Charge.  Some folks come in and tell Ned about their village being raided, and with the help of Petyr, lead Ned into throwing charges against the Lannisters. This is a bad move, and I know it is going to come back and bite Ned in the ass. He should have left that one up to the King. I really feel like Petyr was baiting Ned, and between that and the ambush last week outside of Petyrs whorehouse, I am starting to wonder who’s side he is on. 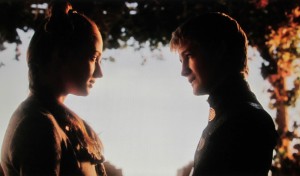 Joffrey comes by to romance Sansa a bit, and next thing you Know Ned tells her and Arya that they are going back to Winterfell. Sansa is all mushy for Joffrey and doesn’t want to go. She insists on staying in Kings Landing and having golden haired lion children with Joffrey. Arya points out that Joffrey is a baratheon, and Sansa swears he is nothing like King Robert. This finally flips the switch in Neds dim head, and he realizes that Joffrey isn’t Roberts kid.

Viserys Gets His Golden Crown 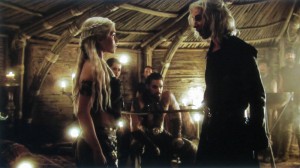 Viserys gets a little drunk, and pissy with his sister, and demands the crown that Drogo promised him. Drogo submits, and gives Viserys a crown of molten gold that immediately kills him.

Daenerys responds, “He was no dragon. Fire can not kill a dragon” reminding us of the hot dragon egg at the beginning of the episode that didn’t burn her hands (or the bath in episode one that should have been “to hot” for her)