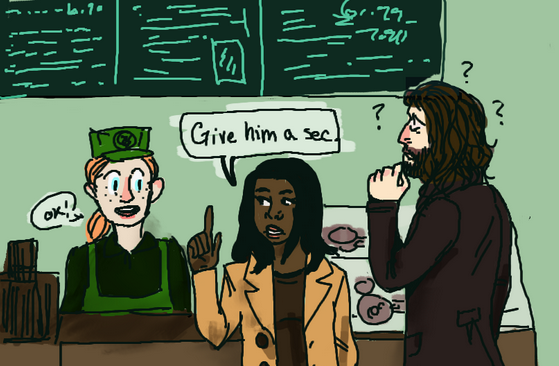 Ichabod Crane is a married man. He’s so married that one of the major plot points on the Fox hit show is his dysfunctional family. He’s married to a witch and his son is physically older than him, and he’s also the 2nd horseman of the apocalypse. To some level, it’s kind of awesome to discover that your son is a horseman of the freaking apocalypse, but all the coolness dissolved when Ichabod and Katrina realized that they had to do something about it.

With all of the family things Ichabod has to deal with the fans of Sleepy Hollow would rather focus on Crane and Mills. Viewers of the show can’t help falling in love with Ichabod and Abbie’s partnership. Their chemistry is so good that fans want them to have a romantic relationship. They already have an affectionate name for the pair, “Ichabbie”.

Tom Mison and Nicole Beharie, were a bit shy when asked about their charismatic pairing. The producers admitted that they weren’t aware, at least at first, that the fans wanted something more. Heather Kadin, executive producer of the supernatural show says that Crane and Mills’ pairing “was something we weren’t expecting fans were going to be so married to the idea of Ichabod and Abbie being a couple. Even when we were casting and everyone was conceiving the idea, we loved that it was this relationship that was first built on distrust and then eventually trust. It’s really a friendship and I think — and to the actors’ credit — a powerful honest friendship that I think you hope is the base for every romantic relationship too.”

“He’s a handsome guy so I know people who are watching are probably like, ‘Hook. Up.’ ” Beharie added that “they don’t play into it” when they’re filming those scenes. “I think people just see what they want to see or would like to become from the two of them.”

Mison, an England native, said that he never heard of shipping before Sleepy Hollow, which prompted him to Google “Ichabbie” “It’s a good thing apparently,” he said to laughs, saying that “there are lots of nice pictures — mainly of [Abbie] carrying me. It’s like me as Yoda.” Orlando Jones suggested jokingly: “You should Google slash, just for fun!”

Aside from Ichabod and Abbies partnership, the producers of Sleepy Hollow also talked about the risk of bringing this kind of show to TV. “It was one of those ideas that was one molecule away from insane,” Alex Kurtzman, executive producer, said of telling a time-travel story without the time travel. “That’s why we responded to it. If we get it right it’s special and if we get it wrong, you’re super f—ed. We knew from the beginning that if it worked it would be special. We never predicted how great our cast would be because they levitated it.”

Indeed! Fans love the characters and made an already awesome show much more interesting. We look forward to another great offering next season!