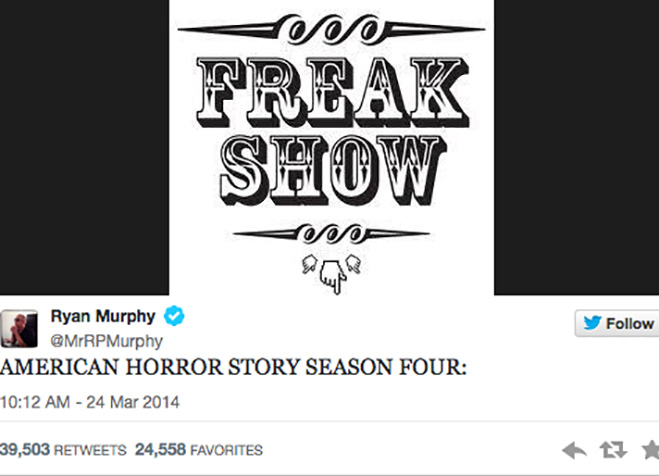 Thanks to American Horror Story co-creator Ryan Murphy, the fourth season’s title is now knowledge to all. The next season of the hit FX show will be called Freak Show, a solid affirmation that the fans were right all along. Just a refresher, a fan video and a couple of posters that said American Horror Story Circus circulated on the internet. Knowing that Murphy and the gang showed clues on the horror anthology, fans decided to throw in their guesses and they were right! However, before Murphy’s big reveal, it was actually an AHS writer named Douglas Petrie who “slipped up” and gave the premise of the awaited 4th season.

In a podcast with Nerdist Writers Panel, Petrie was asked about what they will be doing next to which he quickly responded “I can say nothing.” Then Moira Kirkland, a writer for Arrow and Castle who was also on the podcast said “Well I don’t know if it’s true, but I heard carnival.” Petrie responded “Yes — that was the, it — it does not have a title.”

The Podacast moderator, Ben Blacker, then pressed for more answers by saying “But that’s the setting?” and Petrie confirmed “That’s the idea, that’s very roughly the idea.” If you want to listen for yourself, you can check out the whole podcast here.

Thanks to him and Murphy, we at least now have a nearly complete picture of what the next season will be like. Still want more? Here are some new tidbits from Entertainment Weekly writer Tim Stack.

“Set in Jupiter, Florida, in 1950, Freak Show finds Jessica Lange playing a German ex-pat who is managing one of the last freak shows in the U.S.,” writes Stack.

“Her group of ‘unusuals’? Kathy Bates, Sarah Paulson, Evan Peters, Angela Bassett, and Frances Conroy all play performers whom Lange’s character has rescued; Denis O’Hare and Emma Roberts are also in talks to return. ‘Freak Show’s’ 13 episodes will track this group as they do anything to keep their business around.”

We see a lot of familiar names, but where are the others? Taissa Farmiga and Lily Rabe are absent in the list because they will be busy with other projects. Farmiga will join a horror comedy movie titled Final Girls with the beautiful Malin Akerman. Rabe, on the other hand, will be busier as she will be tackling two new projects. One is a microbudget horror movie named The Veil in which she will be joining Thomas Jane and Jessica Alba. The other project is a TV drama pilot for ABC called The Visitors which is being executively produced by no other than the great Steven Spielberg. The show is described as a race against the clock to vanquish an unknown and unseen alien enemy out to destroy mankind using the Earth’s most precious resource: children.

It will be sad not seeing Farmiga and Rabe on AHS but we can’t be happier for them to explore ventures. Still, without them, American Horror Story Freak Show is shaping up to be a very interesting program.