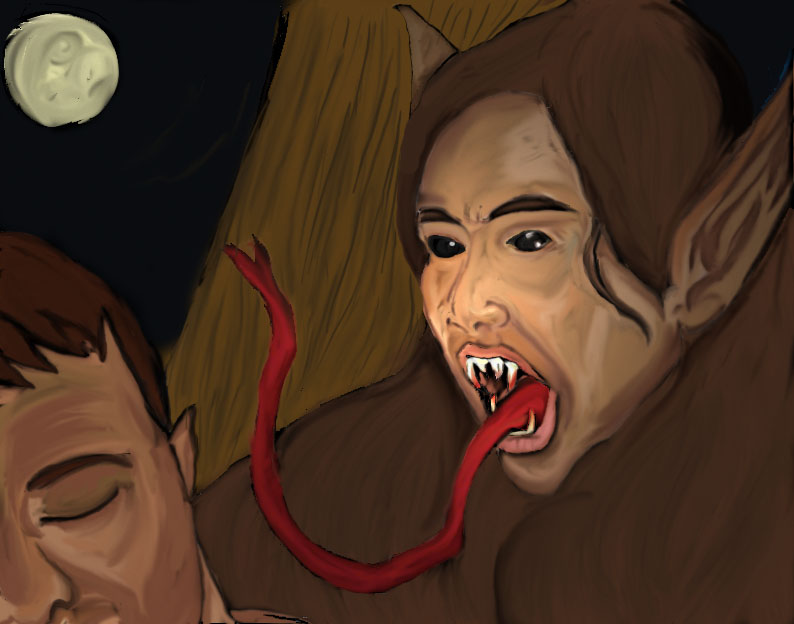 The Aswang shown on Grimm’s latest episode comes from Philippine folklore. Doing a little research I’ve found out that an Aswang is like a combination of a werewolf and a vampire. The aswang looks like a dog (aso means dog, wangis means form aso wangis roughly translates to dog form). The vampire side comes from how an aswang feeds. According to the stories, the aswang has a long tongue that can suck a fetus from a mother’s womb. The Philippine monster also eats children, favoring their hearts and their liver.

The aswang is also believed to be capable of shape shifting, changing its form to a person, cat, bird, and mostly to a dog. In person form, the aswang joins the society as a normal human being would and diverts attention from his or herself by being shy, quiet, and elusive.

The aswang shown in Grimm looked different from the description found on Wikipedia but they got the fetus eating and shape shifting part right. They also added the twist of aswang having a family in which the son should give the mother his newborn because without it, the mother will die.

The episode focused on one story and mostly it was about Reggie Lee’s character Sgt. Wu. And fans of the horror show were delighted to finally learn Wu’s name! Wu’s name is Drew, Drew Wu! According to Lee:

“This episode put me in a lane that I wasn’t used to being in. Wu has got it together, he’s very sardonic, knows his craft and just goes. He’s got his eye on the prize and just solves the crime. So, when I got this script that entailed a great deal of being vulnerable, which is not normal for my character, and a great deal of being out of control, I was in one sense freaked out and scared, and in another sense excited about it. I worked really hard on it. The way that I work, I love to just know my stuff and get to the set and play, and when I got there the director allowed me so much room to play that it was great. It was with Norberto [Barba], who is our usual director when taking care of really pivotal episodes. I was drained after the episode. It was one of the most fulfilling things I’ve ever done.”

The episode was also extra special as Reggie Lee is actually Filipino American.

“They came to me early and said, “Reggie, we’d like to tie in a story to you and your heritage. Do you know any Filipino fairy tales?” I said, “Oh my God, the people in the Philippines live on these things and they literally believe them.” I have friends and family that still believe them. I gave them a list and this is the one they picked. I was really impressed with the script they came up with. It brought out different facets of my character that had never been seen before. I think that it’s great when you can show another side. The more you find out about a character, the more that you can invest in him, and I hope that happens with this episode and with Wu. I think people are hungry to find out more about all of our characters.”