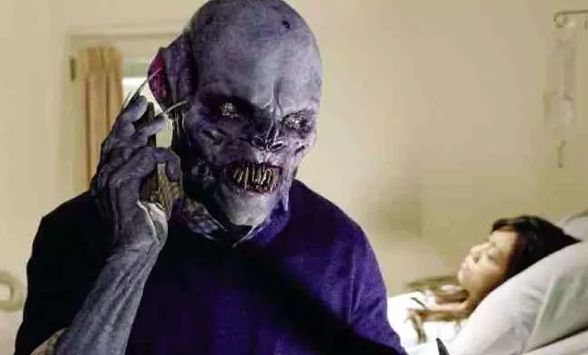 The famous Philippine Aswang or other regional terms like “tik tik”, “wak-wak”, is a mythical creature in Filipino folklore which remains an interesting subject of a wide variety of legends and stories rooted in the Spanish era.  The scary creature is their own version of a hybrid, a vampire and a werewolf. One way to distinguish it from the other creature is that aswang are said to be shape-shifters, stories recount aswangs living as regular townspeople during the day and transforms in the form of a cat, bat , boar and most often , a dog.

A Filipino-American actor director , Alain Uy played the “aswang, in the highly rated episode of the television show  Grimm.Born in Dagupan City, Philippines, Alain Uy moved to the US with his family when he was six. But he never forgot the Filipino tales that he grew up hearing about, including stories about the aswang. March of this year, in NBC’s Grimm,  the actor ended up being the first Filipino to play an “aswang” in a major primetime American show.

He comments, “It’s not often that you get the chance to do something that’s really close to home especially in Hollywood, where a lot of the parts are kind of general-Asian kind of thing, and when it’s specific like that, specifically Filipino, it was great to read the story,” Uy said. He was named after Hollywood legend Alain Delon and was generally a shy kid growing up. According to Uy, It was his brother who encouraged him to come out of his shell by enrolling in a drama class. “He made me do it and as soon as I got on the stage, I was, like: this is freeing to me. This is something that I felt was inside of me but I just never knew how to get it out,” he said.

The actor has appeared in television shows like “Parenthood” and “Sleeper Cell.” He is also known for the 2006 movie Desperation and X’s & O’s in 2007.

Not content with working in front of the camera, Uy is also a writer-director and has worked with music superstar Pharrell Williams and also produces commercials. He said, “I love to be able to control my own destiny which is why I’m starting to write and direct, and I see that as a way for people like myself or other actors to get out there more and take the control out of their hands and put it into yours.”

His latest movie is the 2013 award-winning film A Leading Man which tells about the struggles that Asian-American actors go thorough in Hollywood.  Uy is also developing a TV show about world-renowned deejays.