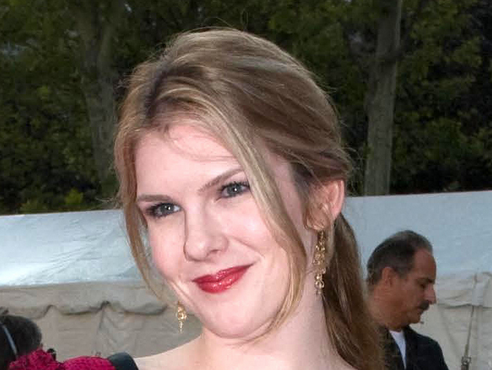 This is the bittersweet part of being a fan of TV shows. Take for example, Lily Rabe, an underrated actress who has become such a joy to watch on the past 3 seasons of American Horror Story. Viewers want Rabe to do well on AHS but her excellence has now opened different opportunities.

The AHS actress has signed up for ABC’s The Visitors, a supernatural show based from Ray Bradbury’s short story Zero Hour.

For now it’s just a one hour drama pilot. Mark Romanek is tasked for directing duties while Soo Hugo has penned the script. Darryl Frank, Justin Falvey, Steven Spielberg and Dawn Olmstead are associated and executive producers of the ABC pilot.

TV Line says that The Visitors will feature a race “against the clock to defeat an unseen alien enemy out to destroy the world using our most precious resource against us.”

Rabe is set to play Claire Bennigan, a child specialist working with the FBI. Bennigan and the Bureau are investigating mysterious cases involving children and their imaginary friend named Drill. Bennigan’s own son gets abducted by the enemy which is expected to test her confidence as an agent and as a mother as well.

If the pilot gets picked up and becomes a full season, there is a high chance that Rabe will not be returning for the fourth season of AHS. This will be a great loss for the FX hit as she has proven that she is one of the most capable actresses on the show.

Aside from starring in a new network drama, Rabe was also tapped to join Thomas Jane and Jessica Alba in a microbudget horror film called The Veil. The movie centers around the mysteries surrounding a cult known as Heaven’s Veil whose members have decided to commit suicide. The answers to the questions regarding the cult lies within the only survivor, a 5 year old girl who returns to the cult’s compound as an adult with a documentary film crew. Rabe will play the survivor while Alba will be the filmmaker. (Jane’s role is still undisclosed.)

It seems that American Horror Story actors are leaving their ‘coven’. Although it has been reported that Jessica Lange will return to the show’s fourth season, she also says that it will be her last. Taissa Farmiga is also rumored to leave the show, while her on screen beau, Evan Peters hasn’t received a call from Ryan Murphy, the show’s executive producer and executive producer.

It may be sad to see some of our favorite TV stars leaving AHS but some actors are returning to the show. Aside from Ms. Lange, Sarah Paulson will also be back. Kathy Bates, Evan Peters, and Angela Bassett want to come back but no one has yet confirmed if they will indeed join the actor pool of AHS’s fourth season.

As for Lily Rabe, her (possible) departure will definitely be a huge blow to the show. However, we must still be happy that her talents are now being recognized by other people.