One On One With Grimm’s David Giuntoli 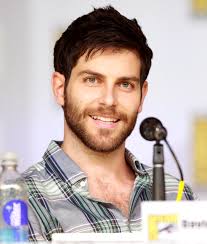 On a Date With David Giuntoli From NBC’s Grimm: Talking Exes, Biological Clocks, and What Will Win Him Over

In a sit down with David Giuntoli, the star of NBC’s hit cult drama Grimm, he talks about his life outside the show.
After filming Grimm for eight months, he was asked what has he been up to during his summer hiatus and he said: “ I know! It’s like I’m on a space shuttle I’m gone for so long. [Laughs] I’ve been writing, I’ve been producing this small movie, and I’ve been going out…a lot. Like I was a college freshman. I’m probably sleeping until 10 A.M. after going to bed at 2 A.M.”
“Road Rules did not help out in the acting career. It did kind of show me that Los Angeles existed, and it piqued my interest in the world of production and entertainment. I studied a bit at iO [Improv Olympics] in Chicago, and then I came to L.A. and studied for a couple years before I even tried to get an agent. One of my actor friends said, “Don’t even think about the business until you’ve studied for two years,” David said when asked about the direction of his career path having also casted in MTV’s Road Rules.
When asked about how he came to book his first role in Hollywood, he narrates: “I came out here in the summer of 2005. In early 2007, I got an agent, and in that first week I booked two different roles: Ghost Whisperer and Veronica Mars. “

He talks about how he reacted when he first found out he was casted as the lead role in Grimm, “I had to pull over. I had just tested at Universal, and then afterward they called me back in and I thought, Oh man, this is good! I made a change that they asked me to do. Bob Greenblatt, the head of NBC was there, and they were all cool and receptive. Afterward, when I got into the car, I got a call from my manager, my lawyer, and my agent. I thought, This is not a bad call! They don’t all call at the same time when you don’t get it! They called to tell me I got it, and I lost my mind. I had to pull over on Lankershim Boulevard because I didn’t want to drive through a Poquito Mas. It was such a vivid memory because you work so hard, and you know that it’s going to somehow change your life. And it did.”

“I was really frightened of how much work it was going to be, if I was going to be able to pull it off—basically I started to get nervous about actually doing the job. You don’t think about that part when you’re auditioning,” he adds.
When asked about how he struggled as a child with ADD he narrates, “I used to be on Ritalin like crazy, but I’m not anymore because the side effects aren’t positive. I don’t take anything [now]. When I’m on set, there’s a lot of downtime. At first there was a lot of Angry Birds, but that goes nowhere. Now it’s a New Yorker subscription that my sister gives me for my birthday or I’ll create distractions on set. I’m sure different directors hate me at certain times. [Laughs] But, yes, it’s hard. It’s hard to get my attention. I get very excited around people that I like, so when so-and-so shows up, I’m like, “Ahhh!” and we’re just joking around all day.”

Grimm will be at the Comic-Con with a panel this Saturday, July 26, 2014 at 3 P.M. and they will feature an exclusive video. The panel will include cast members David Giuntoli, Russell Hornsby, Bitsie Tulloch, Silas Weir Mitchell, Sasha Roiz, Reggie Lee, Bree Turner, and Claire Coffee, as well as executive producers David Greenwalt, Jim Kouf, and Norberto Barba.

Grimm returns to the small screens for season four on October 24, 2014.