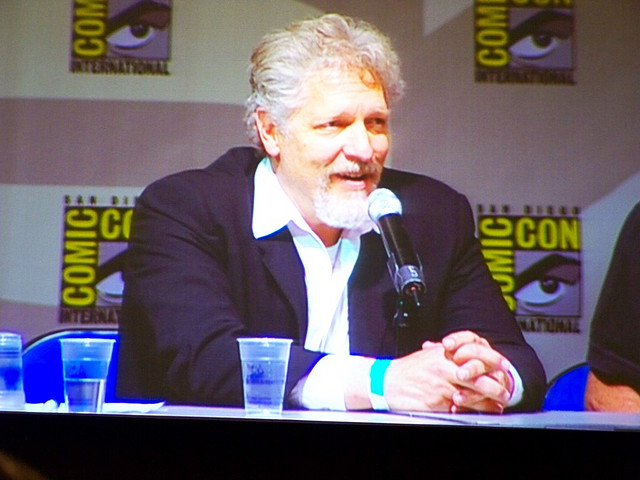 Clancy Brown, the actor who gives life to the character Sheriff August Corbin is joining Agatha, an ABC drama pilot. The Sleepy Hollow actor will play the titular character’s estranged father in the 1 hour drama.

The ABC pilot centers on Agatha (played by Rake’s Bojana Novakovic) a former convict turned big city criminologist who has been asked to help the local police with the case of a mysterious disappearance. The chief of the local police is her father, Detective Hank McAuflliffe  (Brown) – and they haven’t spoken in 15 years.

Brown’s character Hank, has been described as cool, handsome, and rugged. A veteran detective of the Philadelphia Police Department – a “salt of the earth” guy who also happens to be a struggling alcoholic. He is stubborn, and very set on his old ways. Hank is coping with his lack of communication with his daughter, but deep inside he’s very proud of her accomplishments. However, he doesn’t like his daughter’s criminologist methods and he prefers to do things by the book.

Tom Donaghy (The Whole Truth) will write the script and executive produce the ABC show alongside The Mark Gordon Co.’s Mark Gordon, Michael McDonald, and Nicholas Pepper. Jace Alexander is in charge of directing duties. The show will be shot in Toronto.

Brown is represented by Pop Art Management and ICM partners. He is known for a plethora of movies and TV shows including The Shawshank Redemption (Captain Byron Hadley), Highlander (The Kurgan), Carnivale (Brother Justine Crowe) and Starship Troopers (Career Sergeant Zim) to name a few.

Aside from movie work, Brown is most famous for his voice work in different animated projects. He lends his voice to characters like Mr. Eugene H. Crabs of Spongebob Squarepants, Lex Luthor in various DC comics projects, Captain Black and Ratso in Jackie Chan Adventures, Otto in Super Robot Monkey Team Hyperforce Go!, Savage Opress in Star Wars: The Clone Wars, Red Hulk in Hulk and the Angents of SMASH, Dogpound in Teenage Mutant Ninja Turtles, Yakone in The Legend of Korra, Stain in Pound Puppies, and Grune in the new Thundercats.

“Brown was born in Urbana, Ohio in 1959 and had an older sister Beth (c.1957-1964). Their mother Joyce (née Eldridge) was a conductor, composer, and concert pianist. Their father Clarence J. “Bud” Brown, Jr. helped manage the Brown Publishing Company, the family-owned newspaper business started by Clancy’s grandfather, Congressman Clarence J. Brown. From 1965 to 1983 Bud Brown also served as a US Congressman, and later as chairman of the board of Brown Publishing. The family operated the business until 2010.  Brown graduated from St. Albans School in Washington, D.C., as his family lived there much of the time when his father served in Congress. He earned a scholarship to Northwestern University, where he became a member of the Sigma Chi Fraternity.”