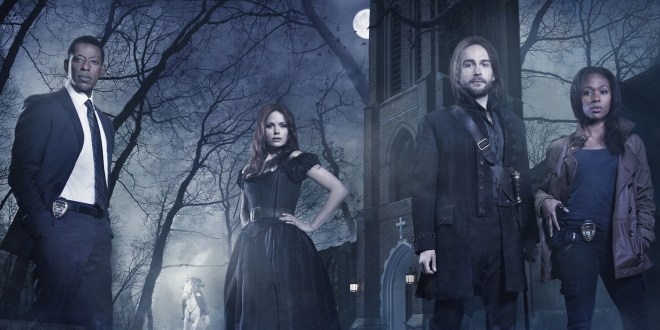 Hudson Valley, New York, 1781. The Revolutionary War is persisting. Suddenly, a fearsome mercenary heads towards Ichabod Crane. Ichabod fires at the horseman, as though he was expected to do so. The mercenary falls off the horse and in seconds, sits up in quite a petrifying manner. The man attacks Ichabod with an axe, revealing a sign on his hand, one of a bow. Ichabod shoots an alarming look at the horseman just when he manages to engrave a fatal wound on Ichabod’s chest. Ichabod retaliates and manages to part his attacker’s head from his body. The two bodies collapse side by side. 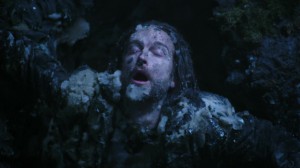 Ichabod resurrects, or so it seems as he rises in a cave, his wound healed. Ichabod starts to wander around, clueless, in the town of Sleepy Hollow. 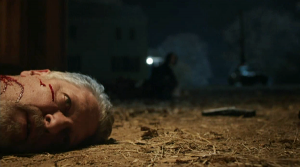 The town Sheriff and Lieutenant Abby are at a restaurant when they learn of disruptions in the local farm and head there to check it out. Abby knocks on the door whereas the sheriff walks into the horse stable. We only realize the gravity of the situation when we see a weapon lying on the ground, followed by a dead body, with its head cut off! The thrill and horror strengthens as the Sheriff encounters another headless man, only this one is alive and carrying an axe, identical to the man whose head Ichabod had ruthlessly chopped off. The Sheriff gets little time to express panic as he too gets his head banished from his body. The horseman takes off riding his horse, leaving Abby alive, for a reason unknown for now. In the meantime, another police officer encounters Ichabod, still wandering around the street pointlessly, just as he hears the alert of the Sheriff’s demise. Ichabod is arrested immediately and taken in for questioning. Abby assures that Ichabod wasn’t the man that murdered the Sheriff and starts to describe the horseman, not mentioning the headless part. She can only get half way through when Ichabod describes the other half, sitting inside the cell. When Abby interrogates about how Ichabod knew all that, he reveals that he was the one to cut off the horseman’s head. 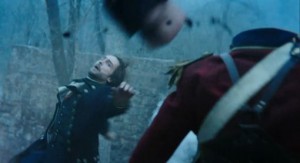 “Are you an elected magistrate? Is this an Admiralty Court?” asks Ichabod, which seems all gibberish to us now as admiralty only exists in titles currently. Ichabod is actually seated for a polygraph test. The polygraph machine deems green as Ichabod tells his tale of how he became George Washington’s spy. Now is the first time he mentions his wife Katrina. With numerous questions cluttering his mind and is taken aback when learns which century he had jumped into. The war, he remembered like yesterday, literally, had been over around 250 years ago.

Decision was established to put Ichabod into a psych ward. The polygraph did back up the tales of Ichabod but it can only judge so far. Even if the machine provided accurate results, it cannot tell whether an event actually occurred or not. If a person is living a lie, that is, if someone believes something imaginary to be real, he/she thinks it is true and in their heads it is. That is what was assumingly going on with Ichabod according to the police department. That indeed seemed like the only logical deduction. But for Abby Mills it was much more than that. She had infact seen the inexplicable and now, seeking for an explanation, she takes the initiative to interrogate Ichabod on her own. 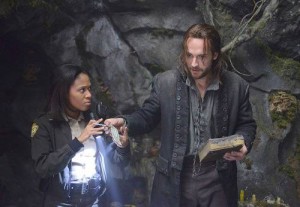 Abby and Ichabod go on a car ride, supposedly to a mental institution when on their way, the reverend catches Ichabod’s eyes and he’s carried into a flashback. Apparently Ichabod and the horseman aren’t the only creatures of the ancient history. Abby asks to see the cave from which Ichabod rose and he takes her there. They find a Bible in the cave with a passage on the four horsemen of the apocalypse marked. Then Ichabod reveals that he was given a mission by Washington to kill a mercenary with a mark of a bow on his hand. Abby finds it absurd enough wen Ichabod adds that the mercenary did not die because he was never a man to begin with, he is death himself.

When Abby tells her captain that Ichabod couldn’t have possibly decapitated the reverend as he was in her custody when the incident occurred, the captain wasn’t pleased and insisted on him being taken to an asylum. In the meanwhile, Ichabod follows a bird which leads him to Katrina’s tombstone, which read “burnt for witchcraft”.

While Abby delivers Ichabod to the asylum, she reveals a piece of her past which obviously still haunted her. She said that when she was in highschool, she and her sister, Jenny, were taking the route home through the forest when suddenly four white trees appeared out of nowhere. They heard voices but she couldn’t clearly see who or what was making these noises. She passed out and when they told people about the incident, they called the girls crazy. Jenny had a greater impact and was still living her life in psych wards here and there. This is probably why Abby is so desperate to cling on to the reality and not let the inexplicable hold on to her conscience.

Abby gets into the Sheriff’s office, possibly because she was missing him, but it turns out to be a greater deal when she discovers a key hidden behind a frame. She opens a locker with it, filled with numerous documents and recordings. The recordings were in the Sheriff’s voice about witches, covens, murders, disappearances, about Abby and Jenny’s case, the apocalypse. Before she is done going through all material, the captain interrupts her and she tells him she was just looking for anything importance to help the case and walks out of there, sneaking out some documents with her. 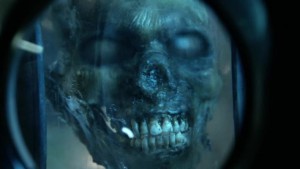 In the ward, Ichabod wakes up to see Katrina in his mirror and steps into it. Katrina reveals that her body was not in that grave and it instead contained the location of the horseman’s skull. Ichabod and the horseman were linked in death when their bloodlines connected and a spell casted on Ichabod kept him alive until the horseman was summoned by the devil who now kept Katrina trapped. She said the beginning of the end was relying on the horseman finding his skull and that he had to be stopped. Sunlight is the horseman’s weakness, she said. Ichabod asked how he could set her free and Katrina said that his answers lied in Washington’s Bible. She finally says that Ichabod was the first witness. Too much information? Yeah, my mind just exploded in this scene. Loved it! 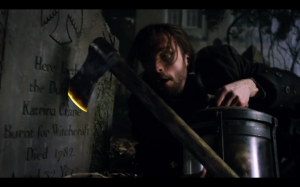 Ichabod wakes up to doctors trying to force needles into him when Abby comes to his rescue in the nick of time and hands fake orders to the doctor while rushing Ichabod out of the hospital. Abby shares the information she gathered from the office of the Sheriff and Ichabod mentions that he had also witnessed the faceless figure and the trees in his dream. They decide to get the skull and Abby calls her coworker, Andy to call for backup. Wrong move! Andy is in on it too. He reveals the location of the skull to the horseman who goes and attacks Abby and Ichabod in the graveyard. While Ichabod has a faceoff with the headless man, Abby is busy fighting Andy. Two other officers encounter the horseman when luckily the sun comes up and he flees.

The captain says that Andy, in custody, is willing to talk to Abby and Ichabod only. Ichabod explains to Abby how Katrina had called him the first witness and how he suspected that Abby was the second. In the cell Andy is visited by the faceless figure and told him that he had failed. Before Abby and Ichabod can get in, Andy is murdered and the see the demon walking away in the mirror. 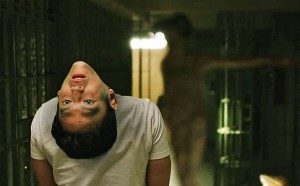