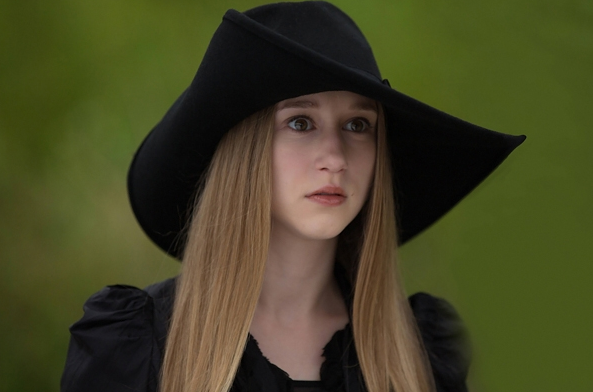 If you follow news about American Horror Story regularly, you now know that Taissa Farmiga will not be returning for the fourth season. Currently she’s busy with the movie Final Girls with Malin Ackerman and Nina Dobrev. But don’t panic, she also skipped Asylum but she was back for Coven so we might see her again on the next seasons.

For now, let’s read some of her answers about why Gabourey Sidibe thinks Taissa looks like a dead baby and her panic attacks when watching horror and suspense movies and TV shows.

Did you have any spooky experiences while filming American Horror Story?

Taissa Farmiga: I know Gaby (Sidibe) had a weird thing going on when she said some of her spells. One of the first times we had to do spells with Madison, when we were bringing Kyle back to life, Emma (Roberts) could’ve sworn she saw a ghost. We were shooting in this old hospital and Emma was like freaking out and she asked me, “Are you nervous about this?” It was just really creepy stuff.

You’re from New Jersey, have you visited any weird places in NJ?

Taissa Farmiga: Ugh, no. I try to stay far away from anything creepy and supernatural. I rather not think about it. All my friends will be like, “Let’s go check out this place!” and I’m like, “No, let’s go watch a movie.”

Gabourey Sidibe tweeted |”My doll @t_farmiga has the best face! She looks like a dead baby. She knows what I mean.” What does she really mean?

Taissa Farmiga: [Laughs.] Oh gosh. Gaby is so incredible and I love her so much. I texted her today. I was like, “Hi, I exist by the way” and she sends me back a text, and she’s like “Hi, my dead baby!” It’s this thing. Apparently, I look like a dead baby when I’m all dolled up. I have no idea. Maybe it does relate to something on the show, but I can’t really explain it too much. Who knows? It’s just incredible. I can’t figure it out.

Do you watch The Walking Dead?

Taissa Farmiga: I don’t watch The Walking Dead. I caught bits and pieces. Some of my friends are trying to get me to watch it, but again, I flip out. I can’t take it. I finally agreed to watch The Sixth Sense, like, a month ago. I was hiding my face in the couch. Most of it is not scary! I just—I have panic attacks. I don’t even know why I’m working on this crazy show because, ugh, I can’t. I’m crazy.

How do you deal with it?

Taissa Farmiga: I go home and I watch, like, Cartoon Network. No, I have no idea. I go home. I’m so scared. I sleep with all the lights on. I keep on the lights in the bathroom downstairs, the lights in my bedroom. I know, I know it’s lame, but guys, I’m scared. What am I supposed to do?