So far, this 6 episode mini series revival of The X-Files has been pretty hit or miss. The first episode wasn’t that great. The second episode was good. The third episode was great, and the fourth episode was ok. I think Babylon, the fifth episode, would fall into the lower end of “ok”. Babylon was a fun episode, but it wasn’t near the fun we had with Mulder and Scully Meet the Were Monster. 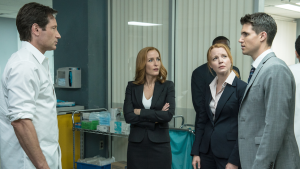 The episode opens with a couple of Muslim extremists in Texas heading off to an art gallery (appropriately called Ziggurat) to blow up their suicide vests. The art gallery apparently was showcasing art depicting the Islamic prophet, and we all know that they don’t like that. One of the terrorists survives the blast (sort of). A couple of FBI agents named Miller and Einstein stop by to see Mulder and Scully before they head off to Texas to try and find the rest of the terrorist cell.

Although the one terrorist survived, he has been stitched back together, and is being kept alive by machines. No one expects him to recover or even regain consciousness. Agent Miller (who believes in the paranormal) wanted to check with Mulder to see if he knew of any psychics who may be able to communicate with the terrorist (or any other method to communicate with him for that matter). Mulder and Scully have nothing to help Miller and Einstein so the latter head off on their way.

Upon arriving at the airport, Agent Miller gets a call from Agent Scully who has a scientific idea of how to communicate with the terrorist by asking questions and looking for responses in brain waves. They decide to give it a try, and Scully agrees to meet up with Miller in Texas. 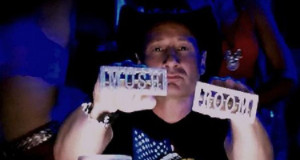 Meanwhile, Agent Mulder calls Agent Einstein and informs her that he believes they can communicate with the terrorist if Einstein gives Mulder some magic mushrooms. She is hesitant, but Mulder convinces her to give it a try.

Scully’s method seems to have some results as we can see a change in the brain waves when agent Miller starts speaking Arabic to the terrorist. She explains they need to set up a baseline and determine the differences between a yes and a no answer before they can any good intel. Before they have a chance to begin, they are evacuated from the building due to a bomb threat.

This is when Mulder and Einstein come in and Mulder chomps down on his magic mushrooms. What follows is a typical Hollywood style hallucination sequence that is entertaining, but shows that the writers of this episode have never actually taken magic mushrooms. That isn’t to say the sequence isn’t fun. It is very entertaining, and we get to (briefly) see fan favorites The Lone Gunman while Mulder dances in a honky-tonk bar.

The sequence ends with Mulder on a boat being rowed by hooded people. At the helm of the boat is the cigarette smoking man. At the back of the boat is the terrorist and his mother posed to look strikingly like Giovanni Bellini’s renaissance painting Pieta (I’m not sure if posing a Muslim terrorist as Jesus is very tasteful, but then again it may be an obscure enough reference that nobody but us religious art geeks get it).

So I get it. It is timely and topical having Muslim terrorists on your FBI show. The whole think about talking to the terrorists spirit while in a hallucinogenic stupor makes it kind of paranormal so it fits in with “The X-Files”. (Although I do miss the days when writers would actually try the drugs that they were going to write about… or at least do some real research. I have tried magic mushrooms before, and I don’t think I would describe the experience like it is portrayed in this episode even if I was still under the influence of the mushrooms while I was describing it.) 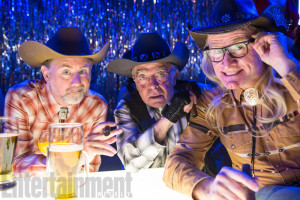 And what the ever-loving fuck was up with Agent Miller and Agent Einstein? They were obviously supposed to be Mulder and Scully, but they came across like characters from a b-movie rip off of “The X-Files”. (or worse still a porno version… “The Xrated Files” anyone?) Maybe it is just a case of expectation vs. reality. When I saw these characters in the trailer for this episode, I expected them to be a new Mulder and Scully. Almost as if the producers wanted to make a new, revamped “X-Files” and were testing the waters to see if these two could take the reigns for the new series. Instead of replacements for Mulder and Scully, we got caricatures of Mulder and Scully and that just didn’t work well for me.