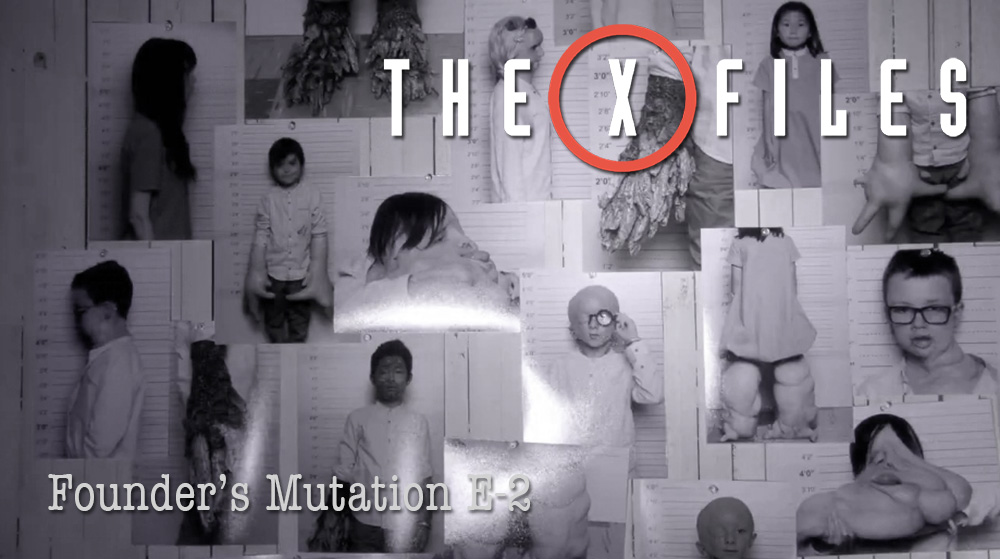 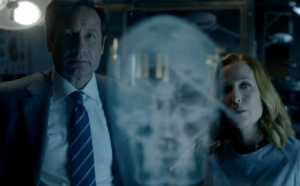 For some unexplained reason (or maybe I just missed it), Mulder and Scully are now full fledged FBI agents again (I wonder if Scully is using vacation time at her Dr job?). Without discussing the fate of Sveta or O’Malley from last episode, this episode goes straight into a new case. A scientist and a genetics lab is hearing strange sounds. He locks himself in a computer server room, and stabs himself in the ear with a letter opener. Mulder and Scully are brought in to work the case because apparently, a couple of newly rehired FBI agents still have security clearance. Although they are quickly informed by a Department of Justice employee that they have clearance to be in the room, not to look at anything.

Mulder steals the dead mans phone on the way out, and he a Scully quickly figure out that there is a “secret” contact on the phone. Mulder sets up a meeting with this contact while Scully heads off to do the autopsy.

In the meeting, Mulder finds out some of our deceased scientists secrets, including the fact that he had a secret apartment in the city. Scully also finds out some secrets. She sees that the scientist had written “Founders Mutation” on the palm of his hand before he killed himself.

They explain that in the theory of evolution, a founders mutation is the mutation that propagates into the species causing a change in the species

Mulder and Scully head off to investigate the secret 2nd apartment, and find many photos of children with genetic disorders. Somewhere along the way, they trip a silent alarm and as the police show up, Mulder is struck with the same sounds that affected the scientist at the beginning of the episode.

The DOJ confiscates the photos from the scientist’s home, and close the case. Skinner informs Mulder and Scully that the red tape at the FBI is pretty thick these days and it will take a while for the case to be officially closed.

Scully figures out a way that they can speak with the “founder”, and in the interview he shows them the children that were in the scientists photographs. He insists that their research is in trying to find cures for the genetic mutations and Scully accuses him of using alien DNA in his gene therapy. We then see a woman displaying telekinetic powers as Mulder and Scully are quickly ushered off the premises.

Mulder discovers that the founders wife is locked up in an insane asylum, so Mulder and Scully next head out to talk with her. They figure out that she was an early test subject of the founder and that her 2 children were experiments. The first child the founder has, the second was presumed dead, but the mother proclaims escaped from her womb.

Looking at the surveillance video from the building where the original scientist committed suicide, Mulder sees a janitor acting strange in the room upstairs from the server room where the scientist killed himself. They track down the janitor and determine he is the missing son of the founder. He has been making the strange noises in people’s heads and is trying to find his sister.

Mulder and Scully bring him in to meet the founder who draws some blood and does some other tests before bringing him to meet his sister. 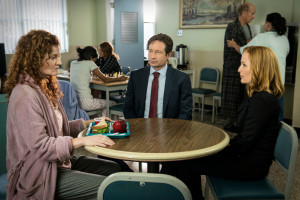 The brother and sister shatter the glass in the room, and scramble the founders brains before escaping. Mulder claims to have passed out right after seeing the founders eyes pop out of his head (but he reveals to Scully that he managed to get the boys blood sample).

This is a well done episode of The X-Files. It has the pre-requisite paranormal undertones, mystery and suspense that we are use to. It moves along the overall story arc of the season, but not in a way that is overbearing (you wouldn’t have had to see the previous episode to get what is going on in this episode). This is something that bothers me a lot in other TV shows currently on the air. They pay so much attention to the overall season storyline that the individual episodes can’t stand on their own. The X-Files always has (and, at least in this episode, still does) made each episode viable unto itself. I hope some other shows take note of how they did this.

In my opinion, this episode is far better then the previous one, and shows us why The X-Files was such an innovator in it’s time, and continues to be great television.