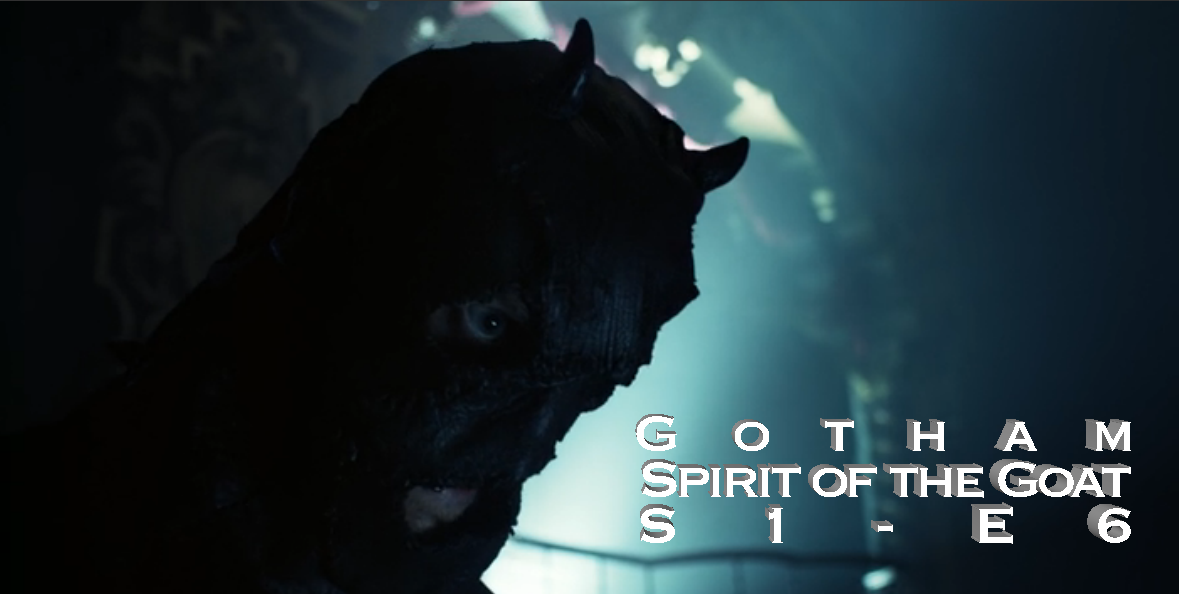 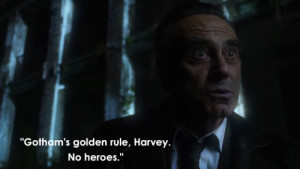 The first season of Gotham has had an identity problem. It has teetered on the thin line of making a cop show vs making a Batman back story. Many times it has failed at the balance and made a lousy cop show that was a good Batman back story. This episode was different.

Having tracked the serial killer to where he has his latest victim, Bullock wants to go in after him before back up arrives. His partner Dix tells him “Gotham’s golden rule, no heroes”. Bullock doesn’t listen and goes in anyway. The victim is already dead. The bad guy springs his trap, and Dix goes down. Bullock gets the guy with a couple of shots, and takes him out. 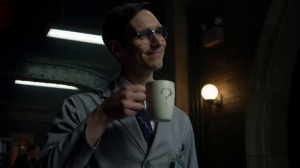 Back in modern time, Bullock is on the scene of a murder that looks like a copycat killing of the Spirit of the Goat killer we saw in the flashback. Gordon is late to the scene because he is dealing with Barbra and her mistrust of his secrets. While waiting for him to show up, we get a lot of Edward Nygma who is played prominently in this episode. Realistically, the whole Ed Nygma thing is a bit over done in this episode. The part is played well, but considering we are a decade away from the emergence of Batman, they seem to be playing Ed Nygma as a bit to much of a nut job for this time. He is being portrayed as if he is one bad day from becoming the Riddler, yet we know he has a way to go before making that leap. (He even has the trademark “?” on his coffee cup.) It was whimsical when every time he had screen time he was putting things in the form of a question, but they went to far in this one for my taste.

At the autopsy of the first victim, Bullock discovers that this “copycat” is using the exact MO of the previous “Spirit of the Goat” killer, even doing things that were never revealed to the press.)

The second victim gets abducted, and Gordon and Bullock figure out it must be someone who works for a maintenance company that services rich people. They narrow down the suspects (with the help of Ed Nygma) and soon get their guy.

This time it is Bullock that isn’t convinced that they have the right guy. After noticing a peculiar tick with the new suspect, Bullock realizes that it was a hypno-therapist that is controlling both this “copycat” killer, and the original “Spirit of the Goat”. Bullock confronts the hypno-therapist and gets her. 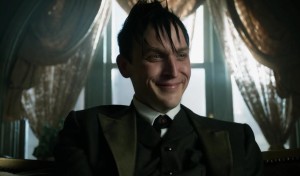 Meanwhile, Montoya and Allen find someone who fingers Gordon for killing Cobblepot, and they get a warrant and arrest him. Upon bringing Gordon in to through him in jail, Bullock adamantly defends his partner… that is until Cobblepot actually shows up at the Gotham police station and announces his identity.

Also in this episode we see Selina Kyle break into Bruce Wayne’s home and steal something. I am sure this will be further detailed in later episodes. We didn’t get any Fish Mooney, Falcone or Maroni in this episode, and it was better without them.

This episode really seemed to be about the case. It built on Bullock and Gordon, and only left the “Batman” stories in the background. Where those stories did play into this episode (in the case of Riddler and Penguin) it was because they needed to be there. (Although Riddler was a bit over played in my opinion).

For the most part, this was a really good episode, and I hope more of the series follows this example.