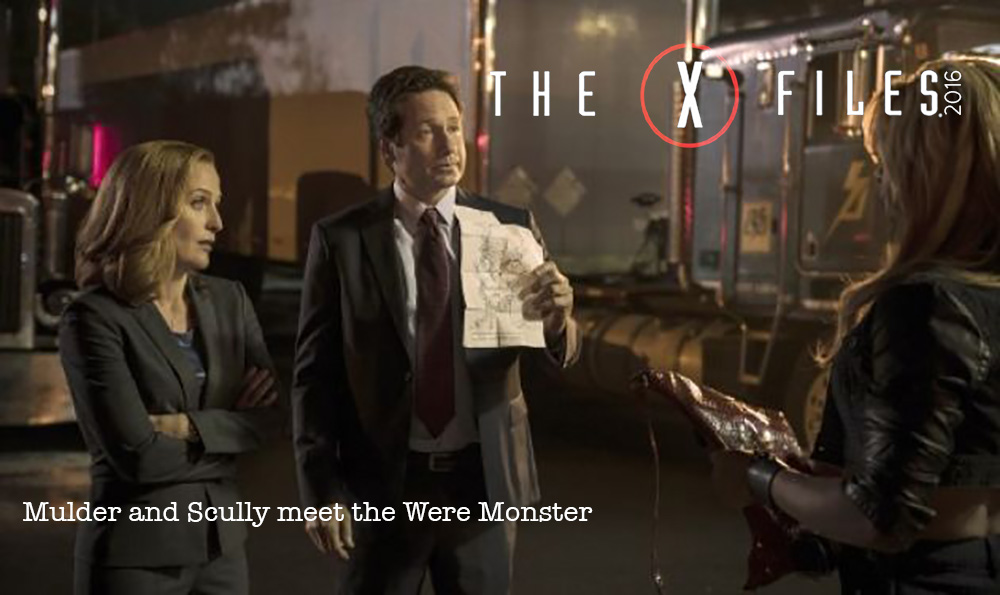 The original run of Te X-Files always skirted the absurd. This is something that was never lost on the series creators. (If you fail to remember the humor of the original run of The X-Files, check out this clip below from the season 7 episode “Hollywood A.D.”)

Mulder and Scully meet the Were Monster opens with an awkward couple in the woods huffing paint fumes. They hear a noise and go to investigate only to find a humanoid lizard monster and 2 guys, one of them dead.

We then see Mulder in an agitated mood as Scully comes to the office to talk with him. Mulder goes on a rant about how all they “mysteries” he used to believe in have been proven to be hoaxes. He is beginning to doubt his career choices and his belief in monsters. This is when Scully informs him that they have been given a new case, and it has a monster.

When Mulder and Scully arrive at the scene of the crime, their has been a role reversal. Mulder gives plausible scientific reasons for everything that could be considered “monster” related, and Scully seems to be more open to otherworldly possibilities. 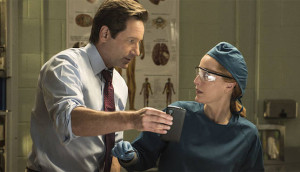 Mulder and Scully soon get called to another sighting of the monster. It seems that it attacked a trans-gender prostitute at a truck stop. While searching for clues, they find the same animal control officer from the first crime scene, and another body. By this point Mulder is determined to get a picture of the monster using an app on his cell phone, but he is having trouble with it. Eventually, he does see the monster, but doesn’t get any good photos of it. They think they see it go into a porta potty, but when they open the door it is just a British guy.

They return to their hotel, and Mulder is awaken in the night to sounds of the hotel manager screaming “monster” When Mulder goes to see what is going on, he finds the motel manager drinking what looks like rubbing alcohol. The manager explains that a tenant was calling him a monster because he wanted the guy to pay his bill.

Mulder investigates the room. Amongst the odd taxidermy wall art (including a jackalope), Mulder pockets a prescription Mulder and then notices that there is a path between the walls where the motel manager has been spying on the tenants. Mulder follows the path back to the managers office and asks him what really happened. The manager explains that the he was spying on the guy in that room when he saw him transform into a lizard man.

The next day, Mulder goes to question the shrink that prescribed the meds he found in the lizard mans room, while Scully heads off to question the man that was in the porta potty. 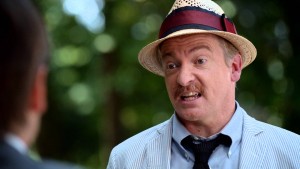 Mulder meets up with Scully at the cell phone store that the suspect worked at after Scully confronted him, and he fled (ransacking the store in the process). Scully has some news about the tests she ran on the victims, but Mulder is in to big of a hurry, He thinks he knows where the suspect went.

The biting social commentary of this scene is overlaid with a sharp sense of humor that can only be pulled off in an episode of The X-Files. This is what great TV is all about.

After this conversation, Mulder has no recourse except to hit the bottle and pass out in the cemetery… When he wakes up, he calls Scully who tells him she is going to talk to the animal control officer they met at the scenes of the first two sightings. He is the real killer, the human monster. Mulder rushes to Scully’s aid, and they capture the bad guy. 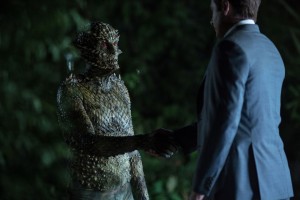 *There is a great article over here. about how this episode is a reworking of an unused script that was intended for a series called “The Night Stalker”. That series was a reworking of an older series called “Kolchak: The Night Stalker” and was an inspiration for The X-Files. As a nod to the origins of the storyline, the Lizardman in this episode is wearing the standard outfit of Kolchak when in human form.