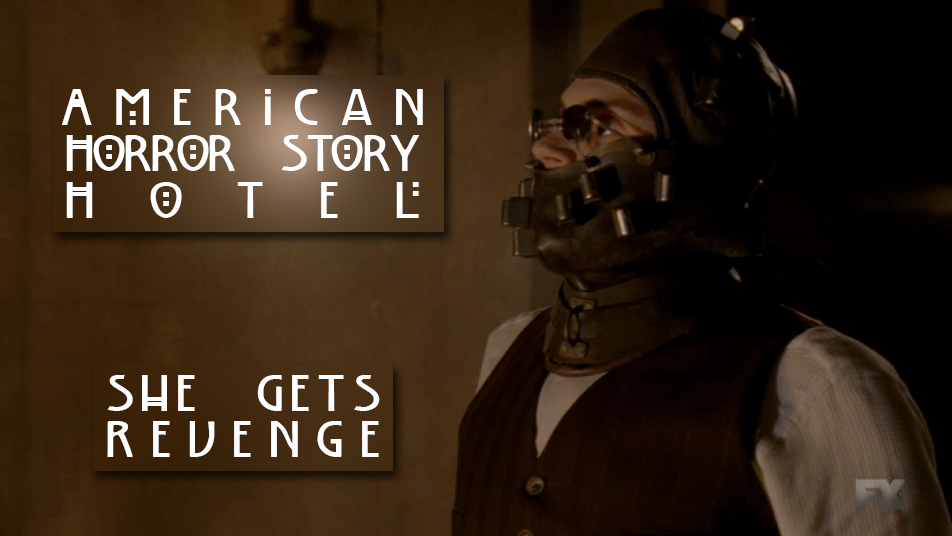 This episode of American Horror Story Hotel seems all about cleaning up all the little senseless subplots things that have been thrown in over the past 10 episodes. 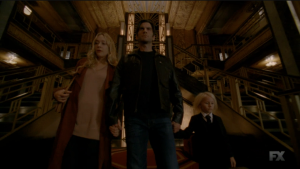 There are a few neat little throw away scenes at the beginning. John and Sally chat about the Ten Commandments killings as John puts some ears in the display case. This comes with a flashback of him killing the people the ears belonged to. Apparently he has 9 kills so far. Only one left to go. The Countess is trying to report the disappearance of Will Drake to the police when his ghost walks in and calls of the cops. (I guess she should have listened to Mr. March when he told her to kill him off property… Speaking of which, Tristan was killed on property. Do vampires not remain as ghosts?) James March barbeques the contractor from the last episode as he talks with John about his future plans for Johns serial killing.

Alex gets John to help her round up the swarm of vampire children. They find them, and bring them back to the Hotel Cortez to lock them up in the corridor with Ramona. Then, Alex and John get Holden, and try to escape the clutches of the Cortez. Meanwhile, Sally is screaming at them while they leave.

Liz and Iris have to clean up after an old couple who decided to kill each other since one of them has a terminal illness and the other doesn’t want to go on alone. Lis and Iris decide to take the same path and make a plan to off themselves, but first, Liz wants to reconnect with his/her son. The meeting is set up, and goes over better then expected. Liz’s son asks him/her to move out of the Cortez and live with his family. This changes Liz’s suicide plan, and he convinces Iris that they should something different.

The Countess hatches her plan to rid herself of Valentino’s girlfriend. Unfortunately for the Countess, Donovan is enacting the same plan to rid himself of Valentino. This turn of events actually makes for one of the better sequences in the episode where the scene intercuts between Valentino’s girlfriend pulling a knife on the Countess, and Valentino pulling a sword on Donovan. Apparently neither of them knows the phrase “never bring a knife to a gun fight” and they are quickly dispatched with a bullet to the head. Donovan takes a few more shots at Valention’s face, and then quips “I have better cheek bones anyway” before heading out the door.

Donovan tells the Countess what he did, and after she goes to check, and then returns there is a huge scene between the Countess and Donavon that might have been interesting if it was performed by better actors. (Matt Boner did pretty well, but Lady Gaga’s hollow performance just ruined the scene for me.)

As The Countess is about to kill Donovan for his transgression, Liz and Iris bust down the door with guns a’blazin like they are in a Tarentino movie.

Overall, this wasn’t the best episode, but it was necessary to clean up how sloppy the rest of the season has been. It also had appearances by almost the entire cast. Although it is nice to see whoever your favorite was, I tend to think this could have been better if they didn’t try to cram so much into one episode.