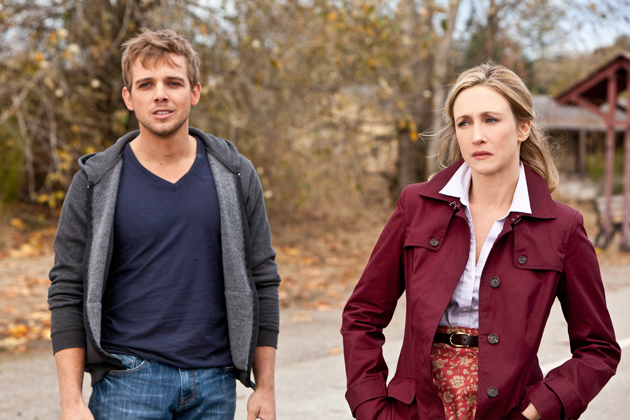 So, the first episode actually raised the standards of the show to quite a level. In the second episode we expect to see quite a few important events, like how far the cops go with the Keith Summers case, about Norma’s father’s death and more on the mystery son of Norma. And let me tell you this, Bates Motel hasn’t disappointed at a single level. In fact it gives us more twists and turns than we even expected! Before I continue with my analysis, Spoiler Alert! 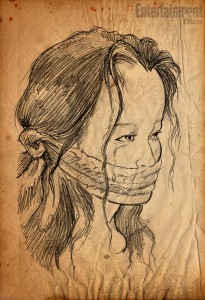 previous episode. And this tells us that this episode must have more to do with that black book filled with what seem like SM sketches. Later in the episode Emma, a girl Norman met in school while puking over having Keith’s blood stuck to his shoes, found out the book and borrowed it. Later, after more research on the book and the Chinese inscriptions, she figured out that the story written in the book was actually true. It said that four Chinese girls were brought to the US. They were told that they would be given citizenship after they worked as housemaids for a while but instead were turned into sex slaves. When one of the girls dies out of overdose, the other three were made to bury the girl at a place which Emma recognized. And later Emma, with Norman took a trip to a forest where they found pot fields. Soon later they were chased by the guards but they somehow managed a narrow escape. But before fleeing, they found a shed from the sketches, learning that the book was no fiction. There, however, was no time to investigate so we are denied the right to know more about the girls in this episode but surely it will come up soon in the following episodes. 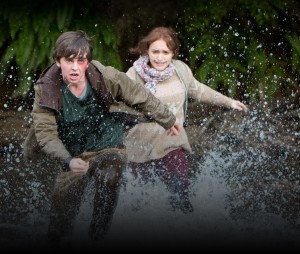 Early in this episode Norman’s half-brother, Dylan debuts. Neither Norma nor Norman is happy to see the guy. He has apparently lost his job and needs a place to stay and even though his mother had moved without giving her new address to him, he manages to track her down. Dylan seems to have quite a number of complaints against his mother, he doesn’t like how she left his father for Norman’s father, how she kept her address a secret from her own son, how she had an awkward way of bringing up Norman and more. Norma was not too happy with Dylan herself. She, firstly, hated the fact that he showed up at all, he came home late which she couldn’t stand and she despised how he always called her Norma instead of mother or mom or anything equivalent. Norman, who already likes following his mother’s footsteps, wasn’t too fond of Dylan either. 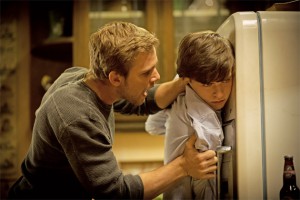 One night when their mother is out, Norman finds out that Dylan has Norma’s name saved as “the whore” on his cell and thus begins the fight. Not just any fight, Norman who is already pretty upset that his mother was out on a date, goes at his elder brother with a murderous rage. Luckily Dylan is much stronger than little brother which ends in Norman lying on the floor with a nasty wound on his face. This was the last straw for Norma who was already keen to throw Dylan out, confronts him about getting in a fight with Norman and asks him to leave. Dylan makes quite a move, threatening her that what will happen if the insurance companies that supported her learnt of the true nature of the relationship which she had with Sam, Norman’s father. Norma gives a defeated smile and decides to let him stay. So we learn that Norma’s relationship with her husband wasn’t a decent one. How many points for guessing that this has something to do with Sam’s death? 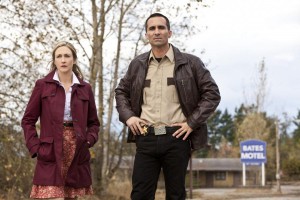 So, aside from the family drama, there is a lot more to talk about. Bradley’s father dies in this episode. Mr. Martin not only dies, he’s charred in his car, where his daughter and Norman first find him. While investigating this horrid death, which takes place very much near the Bates Motel, they also find Keith summer’s abandoned truck in the woods and ask Norma if she had seen him to which she denies. Later the officers get back to her saying that they had learnt from a neighbor that Norma was seen arguing with Keith in front of her motel. Norma keeps her calm and replies that she didn’t ever mean that she never saw the guy, she just hadn’t seen him recently. The police, basically Deputy Romero asks to take a look around the house and Norma denies the request saying that they need a warrant for that. Sometimes Norma panics hard but it’s at times like these when she acts like such a cold blooded murderer which takes me by surprise! Norma later meets Deputy Shelby on the road and soon afterwards, the two go on a date. Shelby tells her that the town has a different way of dealing with things and that Mr. Martin’s killer who set his whole warehouse on fire will be brought justice too, “an eye for an eye”, he said. Not much later, Norma saw a man hanging upside down from a mast, set on fire. An eye for an eye, indeed.

On the other hand, Dylan has made quite an accomplishment. He meets a guy at some sort of stripper club, weeping over his boss, Mr. Martin’s death. This guy somewhat likes Dylan, I suppose, as he later ends up taking Dylan to a man called Gil who apparently can help him made a colossal amount of money. 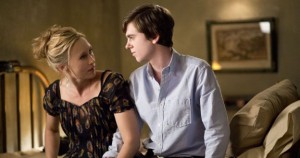 More on awkward mother-son relationship: When Emma visits Norman’s house to work on their school project, Norma starts conversing with Emma. What seems to be a genuine conversation turns become weird when Norma asks Emma her life expectancy after hearing that she suffers from cystic fibrosis. When Emma says it’s something like 27, you can almost feel Norma’s satisfaction. Is that because there was no way this girl could be around Norman for long or is it because Norman will never be too interested in a girl with a terminal illness (well unless she can get a lung transplant). On another occasion, when Norma is going out on a date, she changes her top in front of Norman and when he gives an uncomfortable look, she tells him that she is his mother and this isn’t supposed to be awkward. 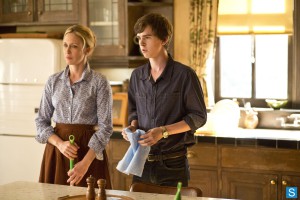