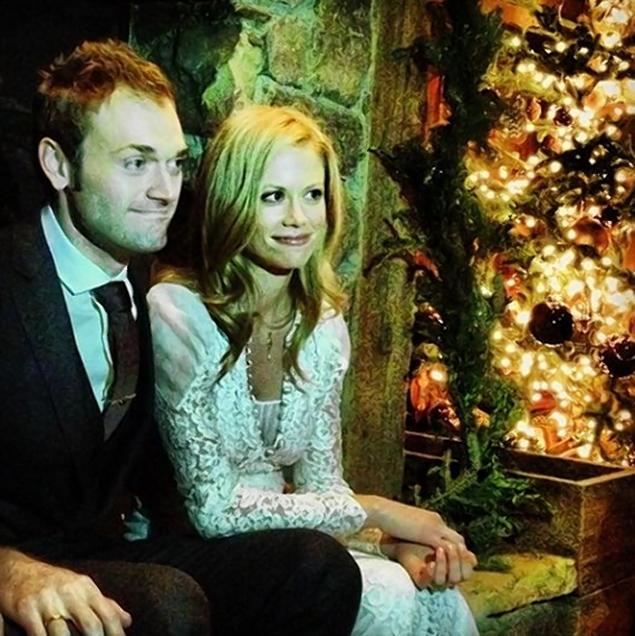 Sorry Claire Coffee fans, the Grimm star is officially married. The 33 year old actress is now married to Chris Thile, lead singer and mandolinist of the band Punch Brothers. The couple has been together for two and a half years before deciding to settle down. They were wed on December 23 at Blackberry Farm in Tennessee.

“It’s our favorite place to vacation and one of the best places on earth,” says Claire Coffee about Blackberry Farm, which she describes as “a gorgeous and rustic resort” in the Smoky Mountains. “We wanted something intimate and earthy, with kick-ass food and wine, and it doesn’t get much better than Blackberry where those things are concerned.”

The wedding was a small and intimate ceremony. The newlywed couple exchanged their vows in front of only 20 guests. The officiant of the wedding was none other than the Coffee’s younger sister Abbie Coffee. Rob Moose, the only non-family member in the wedding, played Bach on the violin as the bride walked down the Aisle. Moose is a guitarist and violinist of the indie-folk band Bon Iver.

Coffee was a beautiful bride, wearing a simple yet elegant 1937 vintage lace wedding dress from  bridal boutique Xtabay located in Portland, Oregon. Chris Thile, on the other hand, was very handsome in his custom made suit by Against Nature in New York.

The newlyweds were set-up by a mutual friend and have been together since June of 2011. They were a couple but in a long distance relationship for about 8 months until the bride moved to New York. Shortly after the move, she was sent to Portland to shoot Grimm.

After the wedding, Claire Coffee released a tweet saying “Forcing @ChrisThile to listen to the new Beyonce album in its entirety because as his wife is it now legal for me to do so.”

Claire Coffee is an American Actress known for her numerous TV roles such as Cassie Tatum on The West Wing, Nadine Crowell on General Hospital, Janie Ross on Franklin and Bash, and as Adalind Schade on NBC’s Grimm. Coffee’s character Schade is scheming witch pregnant with a royal demon baby.

Chris Thile is a musician who is in the band Punch Brothers and the progressive acoustic trio Nickel Creek as a singer and mandolinist. He may also be the luckiest guy in the whole wide world.

Grimm ended their winter break last January 3 with the episode Red Menace. It will air the next episode, Eyes of the Beholder on January 10, 9:00 pm.

I think Claire Coffee is pretty lucky herself. Chris Thile is an amazingly talented musician.