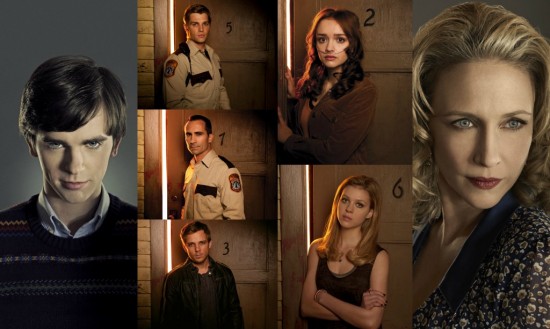 So, it is finally time to embrace the finale. And was it grand? I’ll let you decide that. But you did not expect a finale episode of Bates Motel without a murder and the unraveling of a couple of secrets now, did you? Well yes, you will get your money’s worth from this particular episode as it got beyond the level of creepiness I expected. Well, I’m getting ahead of myself. So, let me walk you through the episode gradually. And for one last time for the season, Spoiler Alert!

Norma goes to the station, quite naturally after the incident last night. The woman who reported to the police after receiving flowers with a note saying “see you soon” is bound to go to the cops when she receives such a massive life threat. Norma starts to scream at the station, again quite naturally, and Romero has to come down himself in order to calm her down. Norma updates him on Abernathy’s last move. She tells Romero how her ex-motel guest had threatened to kill her sons and then her. Romero keeps his calm throughout the and finally tells Norma that it will be taken care of. Norma is displeased with the reaction. Romero gives her his word that she and her sons will remain unharmed and seems like that is the best he’s going to do so Norma leaves the station without further argument. 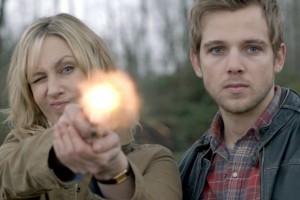 Now since Norma is not buying Romero’s act of having everything under control, she decides to get things under her own control. Who would you turn to when you are in need? That’s right; ‘family’ is the word! But this isn’t the family Norma would seek help from just any other day. You guessed it; Norma goes upto Dylan to get her a gun. Dylan freaks and strongly refuses but in course of time he changes his mind and gets her a gun! Norma is a hard lady to satisfy, when she gets the gun she has to interrogate about why he has the gun. She questions him about the kind of job he was doing and when he tells her about the weed guarding task, she stats judging but stops herself when she sees Dylan regretting telling her about it. Ah, mothers! While Dylan is trying to teach his mother the art of shooting, he accidentally calls her “mom”. Norma is overjoyed but Dylan acts embarrassed and blames it on the fact that she is holding a gun. I’ve seen many weird family bonding moments, especially on this show, but this was, so far, my favorite!

While Dylan is drawing closer to one of the family members, he’s inching further form another. The doorbell rings and Norman opens the door to find Bradley on the other side. For a moment there he seems somewhat pleased until she asks for the elder brother. Norman overhears their conversation when Dylan is giving the possessions of Bradley’s father which he gathered from the office. Later when Dylan tries to talk to Norman, his anger is evitable and Dylan seems slightly concerned. But Norman refuses to have any feelings towards Bradley and tells his brother to whatever he wishes as far as Bradley is concerned. I wouldn’t take my chances if I were Dylan!

So, what new in White Pine Bay High school, you ask? Well, a prom! That’s what’s new. Emma is miserably sanding alone and Norman can’t do any better than ask her to go to the prom with him. It is quite a cute scene when the two share a friendly understanding. However, it blows up in their faces when they reach the dance. 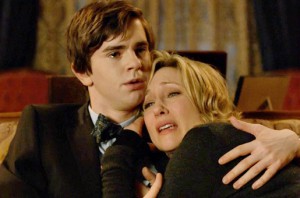 Emma gets herself a pretty dress for the dance and even gets Norma’s approval on it. While she is holding the dress for Emma, the mark on her leg shows up. Emma glares at it and Norma starts saying how it is a mark caused by spilling hot chocolate over herself when she was a child. Emma seems to be doubtful about the story, as are we. At a point in this episode, we do learn of another version of the backstory of the injury. Norman, angry over everything going on with Bradley, is seated on the sofa, waiting for his date to arrive, while his mother dumps the load of her horrid past on him. Norman sits quietly and listens as his mother goes on about how she has been made to have sex with her own brother from the age of 13 and how her father was a fearsome man. One day when her brother was with her, her father suddenly came to the house and Norma was so frightened that she jumped out too fast and hurt herself as the hot iron fell on her. I feel bad even typing this chapter of the woman’s life. It is as tragic as it can get and she has all our sympathy but did she have to drop the bomb now? And did she do it on purpose? Norman seems to have almost stepped into delusion when Emma finally arrives and the two head off to the prom. 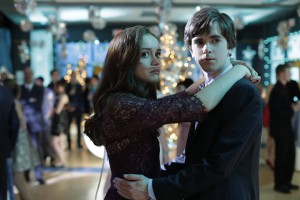 At the prom Norman cannot get his eyes off Bradley which gets him in trouble with both his date and hers. Emma tears up saying how stupid it was of her to hope that Norman would quit dreaming of Bradley and finally pay Emma some attention as she got all dressed up for him. Norman has no particular reaction to this and as Emma is about to leave, he decides to do the same, only Emma abandons him. The girl is obviously hurt which obviously brought out the worst in her. But who has ever been able to force love out of anyone? Ah…teenagers and their drama! As soon as Emma walks away, Bradley’s boyfriend walks up to Norman and takes him out for a chat. He is obviously pissed over Norman’s behavior around Bradley and there is a fight in order, more teenage drama. 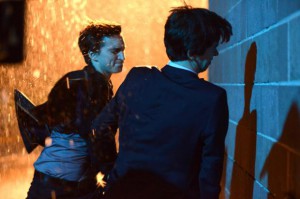 Next thing you know, Norman is walking in the rain and ends up winning a ride with his teacher Miss Watson. She takes him to her place to clean up the wound he got from the fight. Norman had hilariously mentioned that it was a fight but actually he’s the only one that got hit, the other guy was fine. Next up is a little more creepiness as Miss Watson keeps Norman waiting while she goes inside to change. I’m sure there is something wrong here because the door is left open to an extent that Norman can easily watch his teacher undress. I mean, what’s up with that? Is everyone is Bates Motel diabolical? Norman starts to have one of those imaginary conversations with his mother again. She keeps saying what kind of a woman brings a teenager home and changes in from of him, followed by her same- “you know what you have to do”- dialogue.

In the next scene Norman is running back home when he encounters Norma’s car. Norma has been back from her adventure. She had gone with her gun only to witness Romero and Abernathy discussing business. Apparently Romero has the money and he offers Abernathy a deal, an equal partnership. Before all Abernathy can let all the information sink in, he is shot to death. Romero ends up throwing the money away (did he really though?) and saving the day. 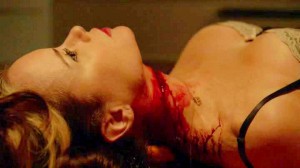 Norma was about to show off her new talent by shooting Romero before figuring out that he’s the good guy. But anyway, all’s well that ends well! Who am I kidding? Do you really expect the amazing Bates Motel to end well? Yes, you know better than that. We finally see the revelation of the pretty teacher’s final destiny. She is lying, dead on the floor. There you go, there’s your murder. And of course, in the last scene when the body is lying on the ground, you can see a pendant with the initial “B” on it. Does that ring a bell? How much would you like to bet that this is the same “B”  Bradley’s father was having an affair with?

Frankly, I can’t wait till the next season which airs 3rd March, 2014. Well, stay swell! Until next season!