This episode, according to me was the silence before the storm. We know that the next episode contains the finale. So, for me, this episode set the grounds for the next one to stand on. There surely are a number of things to be watched out for in the finale. And what those are will be known as soon as you are done with this episode. So let’s begin with the spoilers! 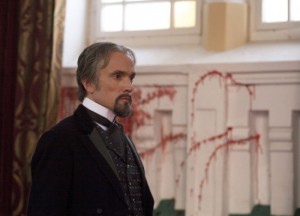 Let me start with news on the children. Last episode we had learnt that Browning’s children had been kidnapped or so it seemed like. In this episode we are surer as to what happened to them. Yes, they were abducted and yes it was the predictable kidnapper. Van Helsing has the children held captive and apparently unconscious. It is reasonable to believe that he would end their lives, as Browning did the same to Helsing’s kids. Helsing comes with a hammer to bash their innocent faces but he is incapable to performing such a heinous act and instead breaks into tears. The man cannot imagine another way to avenge his family now with the resonator being gone which lead him to take measures as such. Innocence is always under threat when a war is to take place. Helsing takes another route and sends a ransom note to Browning. I wonder where he’s going with this.

Grayson asked Van if had something to do with the kids’ disappearance and threatened that it wouldn’t bring him good results if he did. Browning got the police to look for his children in Carfax, suspecting Grayson, as he always does. But to Browning’s dismay, the place is clean, with no sign of his kids. 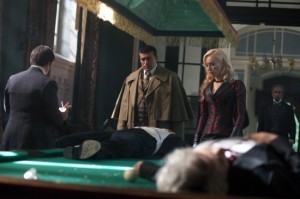 Grayson is more than disappointed now that he holds the Order responsible for the attack on Mina. Renfild tries to talk sense and tells Grayson how the painting of Ilona was recovered from Davenport’s place and how he could have connected the dots, finding his answer as to whom Grayson loved the most. So, the attack could have been sanctioned solely by Davenport. But Grayson wouldn’t listen and he acts hastily by taking his vampire buddies to attack members of the Order. When Jayne and Browning find the bodies, they are convinced that it is a declaration of war by Dracula or whichever vampire they are up against. Jayne, upon hearing the news about Browning’s children, avoids her feminine side and instead reminds Browning about the primary oath of the Order which forbids him from putting their family’s needs ahead of the Order’s needs. This actually rings a bell as soon afterwards he lied to the cops that he found his children. Browning and the Order shift all their focus to the vampire running in their neighborhood. 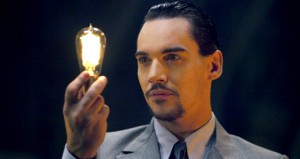 The charges over the resonator are lifted and Grayson is overjoyed! He is back on the polishing his initial plan. Browning is not quite sad himself. It was infact he who wanted to present the resonator to Grayson so Browning can make sure that its demonstration causes a catastrophe. Harker is the new addition to the Order, bonded by their timeworn ritual. Harker and Browning have an understanding as they speak about Davenport. Harker asks whether they had authorizded the attack on Mina and when Browning declined, the two came to a mutual agreement. So, when Harker was asked by Browning to steal the blueprints of the resonator, he does as told. They are trying to make the resonator seem so dangerous to the public that they shiver by the mere thought of the object.

I have mixed feelings about Lucy. Can you actually blame someone for ignorance? You could I suppose. Especially, when your ignorance can cause your best friend to lose their fiancé. Lucy realizes what she had done wrong and visits Mina at the hospital and breaks the news to her and deservingly gets throws away by Mina. After hearing Lucy’s side of the story Mina goes all the way to Harker’s place and inquires about his recent activities. Harker is still in his reckless mode and I don’t think he’s going to step out of it any time soon. Mina asks Jonathan why he was doing all this and he replies that it was because she loves Alexander Grayson. Mina walks out of there and on her way she sees a reflection in the water of Ilona and faints. She finds herself in the hospital ward when she awakens and Grayson s there to visit her with a rose again, of course. They talk about what they have between them and Mina tells Grayson about Lucy and Jonathan. Grayson is astonished by it and quite agitated too it seems. Mina is on a roll of showing people the way out as she even asks Grayson to leave as he says that he cannot go forth with Mina until he is done with his mission.

Grayson is upset that Lucy would do such a thing to her friend. And we all know how things turn out when someone upsets Dracula. Okay, don’t imagine the worst already! Lucy is in the middle of a milk bath when she is interrupted by a bite on her neck, followed by Dracula’s blood forced into her mouth. Lucy is left alarmed and Dracula goes, giving a monstrous destiny to the girl who had performed a monstrous act.