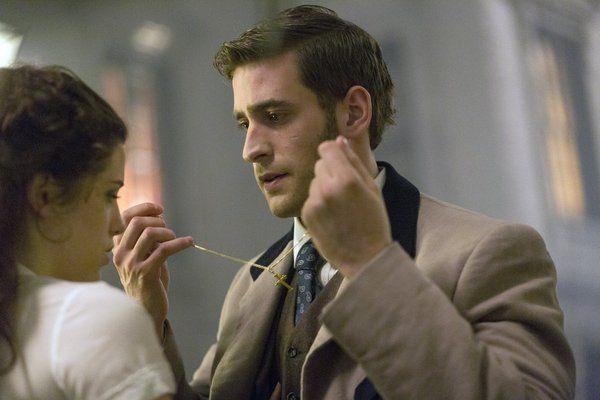 The episode starts with the history of the transformation of Dracula from an ordinary fellow to the creature of the night. You’ll feel sorry for the guy as the invincible Dracula goes through a phase of agony, getting beaten up and forced to drink blood out of a skull but he resurrects only to wake up as the darkest, most vengeful immortal of all time. In this episode we face some striking situations, filled with pain, romance, love and revenge but more on that later. So, let’s dig into the specifics of the episode, shall we? Watch out for Spoilers! 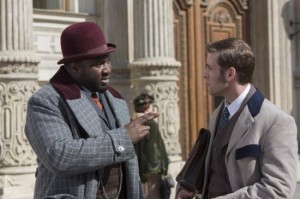 At the beginning we see Dracula mentioning to Renfield about Lady Jayne’s affiliations with the Order of the Dragon, formerly called the Ordo Draco. Renfield congratulates Dracula for now being a majority shareholder of the British Imperial Coolant. We can, thus see how Grayson’s threat worked its charm Lord Laurent. This win on Dracula’s part, however, brought nothing but grave misery on Laurent. When Mr. Browning came to know about Laurent’s turning of his shares, he spoke the two spoke and when asked whether he was under pressure or a victim to Grayson’s threats, Laurent chose the path of silence as he couldn’t possibly reveal the secret of his relationship with Daniel Davenport, bringing 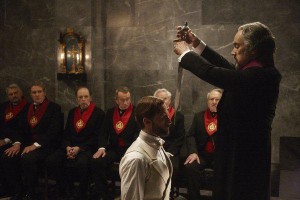 shame upon himself, his family and to all of his loved ones. Laurent is seen engaging in a conversation with Daniel while the couple argue over what their next move must be. Daniel insists on not letting Laurent go to the meeting of the order, Daniel even suggests the two ran off to somewhere, the Order would not be able to reach them. Laurent, however, refuses and says that he knew this is what was waiting for his once he had sold his shares to Grayson. The tragic moment finally arrived, when Laurent had to walk down an aisle, upto Browning, where death awaited him. Browning, with a straight face, stabs Laurent with a blade in front of the whole order, including Daniel Davenport.

In the previous episode, we had witnessed that Mina and Jonathan find themselves having a serious fight caused due to their diverse point of views regarding Mina’s continuation of her education and eventually pursuing a career as a doctor. In this episode we find Jonathan stopping his carriage outside Mina’s place for a while until he sees Lucy entering the house and then he leaves the place quickly. Lucy puts up an effort to make Mina recover from her broken-heart-phase. The two head off to the officers’ club where they get wasted while checking men out. In another party, Mina again gets too much to drink and a man dares to show indecent behavior towards her. In the nick of time, Grayson intervenes and throws the man across the room. Mina and Grayson then have a quick chat when she reveals to him about Harker’s previous behavior and how he feels of her. In the next morning when Mina wakes up next to Lucy, who was sheepishly admiring her sleeping friend’s beauty, figures out that she has missed her class with Helsing. When Mina goes to Helsing, he seems disappointed but she asks for a second chance to prove herself and Helsing agrees by appointing her as his assistant for the term. Grayson is later seen with Harker, while he is working, and advices him to think over what he had done. This was my favorite moment in the episode. Grayson calls Harker a fool and explains that it was wrong of Jonathan to wish to deprive the woman he loves of pursuing her desired career, while he himself is determined to do so. Harker replies, “Call me a hypocrite.” And Grayson, in his husky voice, says, “No, Harker, I’m calling you a fool. But you are a man in love. And they are very often the same thing.” The look on Harker face, after this remark, is not worth missing. By the end of the episode, Harker seems to have come to his senses, as goes up to Mina Murray and apologizes for his wronging. Mina not only forgives him but asks him to marry her. The two share a romantic moment and Jonathan puts a necklace with a cross around Mina’s neck.

Lady Jayne is seen busy at a hospital, asking Mina’s father about some kind of a medicine. Mr. Murray discusses this with Van Helsing, even though asked for discretion. On understanding that Jayne was the one asking for such drug, it was clear to Grayson and Helsing that it is required for Lady Jayne’s seers. In one scene, it is shown that the seers are able to track Dracula, leading them all the way to Lady Jayne’s bedroom. However, Helsing has already managed to poison the seers and later hammers them to death. In the same day, prior to this incident Grayson sneaks out of bed while Jayne is asleep and wanders around the house. He discovers a secret passage, leading to a dungeon where he finds a locked up vampire, begging for death. Grayson returns to the bedroom, his eyes filled with tears. You believe, this is it, now Jayne’s life comes to an inevitable end as Dracula climbs up in bed with her. However, quite the opposite occurs as the couple start to get intimate. It seems, as though Dracula has a lot more in store for the vampire huntress rather than an effortless death. 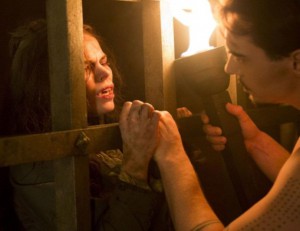 During the end of the episode, Daniel Davenport appears to be crying looking at Lord Laurent’s photo with him. And not much later, adding to the numbers being deceased in this episode, he ends his life, putting a bullet to his head. Hearing the gunshot, Lord Davenport comes storming only to find his son on the floor, dead. Skimming through Daniel’s suicide note, Lord Davenport finds Grayson’s name and gives out a scream and, from what it seems, swears revenge upon the man.