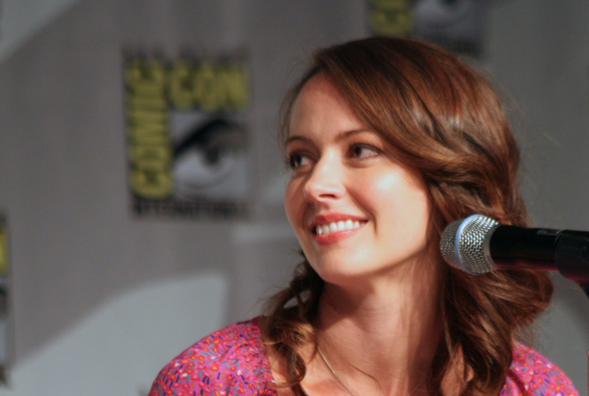 Casting can be a tricky thing. Take for example Grimm in its early stages of conception. The creators David Greenwalt and Jim Kouf wanted the lead star to be fresh, someone who cannot be easily recognized from any previous TV projects. David Giuntoli did have TV experience but they were one-off roles in comedies or dramas like Grey’s Anatomy and The Ghost Whisperer. He was good looking, not too recognizable, so the creators chose him to lead the then new show. The supporting cast was then filled by talented actors like Russell Hornsby, Bitsie Tulloch, Silas Weir Mitchell, Sasha Roiz, Reggie Lee, Bree Turner, Claire Coffee, and so on. With the lead cast and the support in place, the only thing left to do was recruits guest stars which gave the creators the opportunity to tap into their actor pool that worked with them with previous projects like Angel, Buffy, and Ghost Whisperer. Here are some of my favorites.

Aside from being beautiful, Amy Acker is also very geeky. She is just one of the Angel alums to guest on the show, but among all the guest stars, she is the most recognizable. Acker is known to be on a few Joss Whedon projects like Cabin in the Woods, Dollhouse, and Whedon’s version of Much Ado about Anything.

Aside from Whedon projects, Acker has made appearances on How I Met Your Mother, Alias, Once Upon a Time, and a regular part on Person of Interest.

Cathey is one of those actors that make everything better just by being in it. Regular viewers of The Wire, Law and Order: Special Victims Unit, and Oz will certainly recognize the talented actor. What I love him for is his stint on House of Cards as Freddie, rib joint owner who’s loyal to Frank Underwood, Kevin Spacey’s character. To the uber geeks, Cathey was a Klingon commander in a season six episode of Star Trek: The Next Generation.

Following Amy Acker’s footsteps, Alexis Denisof is another Angel alum to guest on Grimm. But before he was on Grimm and Angel, Denisof was in Buffy where he started his bond with other Whedon alums. His real life partner, Alyson Hannigan who stars in CBS’ How I Met Your Mother is also a Buffy alum, so it was just natural to see Denisof play the charming but always tanned news anchor Sandy Rivers on the hit comedy show.

You may have to do a Goggle search with this one because of all the guest stars in this list, he is the one with the “I know him from somewhere” face. And I can’t blame you if you don’t know Fischler by name because he became an actor that only appears on TV shows one time and not that all memorable. But that doesn’t mean he’s not talented. The reason I put him here because I love his stint on the 2nd season of Mad Men. But you may have seen him on other TV shows like Charmed, Lost, Star Trek: Enterprise, Pushing Daisies, Southland, or The West Wing.

[…] article, Grimm’s Greatest Guest Stars, is syndicated from On Edge TV and is posted here with […]